Logo for NATO's southern hub at the Allied Joint Forces Command near Naples, Italy. The hub's main mission is to identify the root causes of threats to Europe's southern borders so allies can take preventive measures. (Courtesy of NATO) 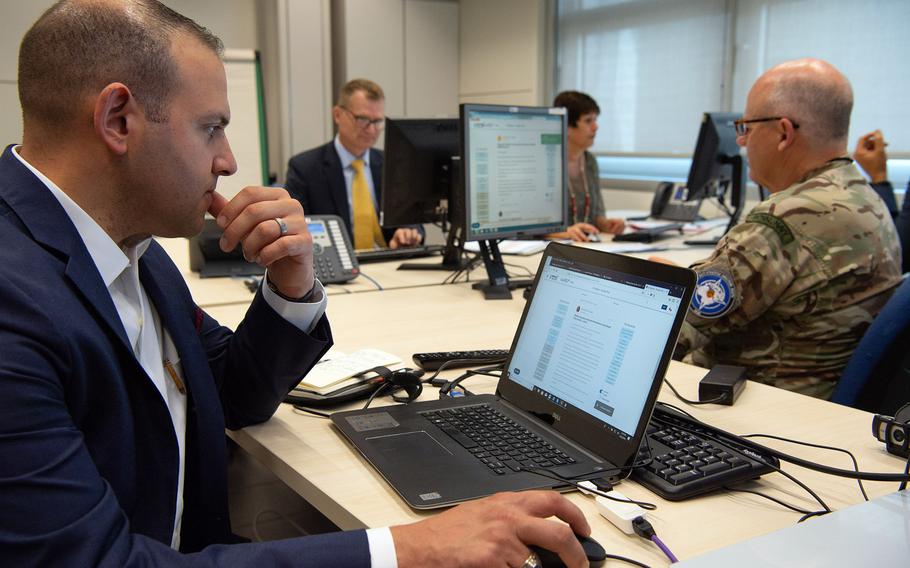 NATO’s information hub in Naples, which becomes fully operational next week, analyzes such problems in parts of Africa and the Mideast, and proposes policies and strategies to help prevent them from threatening Europe’s southern borders.

The hub opened last year at Allied Joint Force Command Naples, partly in response to the Pentagon pushing NATO to better protect Europe against terrorism. It is expected to be at “full capability” as President Donald Trump and other heads of state meet at a NATO summit on Wednesday in Brussels, allied officials said.

It is part of NATO’s post-Cold War evolution to a security force that looks at how it can prevent threats and not just defend against them.

“This is the aim — we want to anticipate the crisis to avoid it,” said Italian Brig. Gen. Roberto Angius, the hub’s director.

Hub analysts might look at how Libya’s political unrest spurs terrorism or at how Lake Chad’s depleted resources have caused a mass exodus that adds to the flow of migrants from Africa to Europe.

The staff would then draft a report with recommendations for NATO, the United Nations and other international bodies.

“We can’t fix that problem … but we can publish our analysis of it,” said Lt. Cmdr. Mike Nunziato, a U.S. Navy analyst at the hub.

“It’s very important on the ground,” Przenioslo said. “Some of the people living there see NATO only as a military organization.”

The hub is focused on the North Atlantic Treaty’s Article 2, which encourages stability and peace through cooperation, she said, adding that NATO’s longtime emphasis was on Article 5, which called for a strong response to attacks or escalating threats.

“We’re adapting,” Nunziato said. “We can’t just take what was working against Russia for 70 years and shift to the south. We’ll fail. The threat is different.”