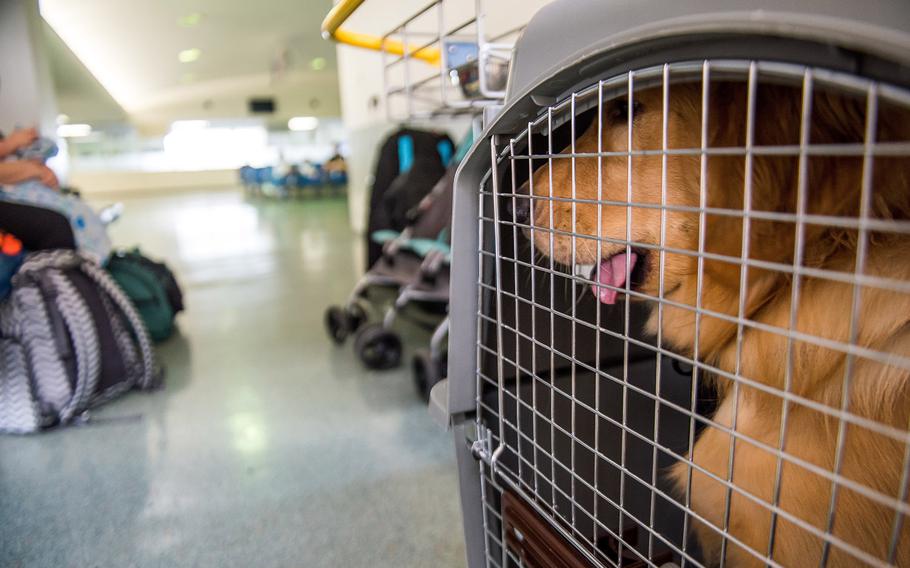 A customer's dog sits in a kennel in the designated pet area at the Yokota Air Base, Japan, Passenger Terminal, Nov. 29, 2018. (Gabrielle Spalding/U.S. Air Force)

WASHINGTON — Military families stationed overseas with pets that have been banned from United Airlines have until July 31 to move their animals stateside one more time on the air carrier, the Marine Corps announced.

United Airlines has agreed to extend an exception to their new policy that restricts high-risk pets from their flights. The ban on 21 dog breeds and four cat breeds include short or snub-nosed pets, which have more difficulty breathing, strong-jawed dog breeds, and large dog breeds such as mastiffs. The restrictions were put in place after a high number of animal deaths on United flights came to light early last year.

When United enacted their more restrictive pet policy, military families overseas raised concerns about the loss of an affordable airline for their pets as cargo options and other commercial airlines can raise pet transportation costs into the tens of thousands of dollars.

The cost of flying a pet on the military charter can be between $250 to $325 and commercial flights could go up to about $32,000, said Lt. Gen. Charles Chiarotti, the Marine Corps’ deputy commandant of installations and logistics. For the price of a commercial flight, “I think you’re getting off well if you’re between $4,000 and $10,000 for a normal, American golden retriever,” he said. There are also additional costs when people use a Japanese pet service to help expedite the process of the pet’s travel.

Chiarotti was the deputy commander of U.S. Forces Japan when the ban went into effect last year and where hundreds of servicemembers with pets were affected.

In Japan, Marines make up the majority of the 54,000 American servicemembers, according to Chiarotti. They frequently fly with United because they can book all their flights, including the ones with local carriers, through the company. United also allowed pets up to a certain size to be listed as accompanied baggage, Chiarotti said, which cost less than if they were listed as cargo.

Last March, a French bulldog puppy died on a United flight when it was placed in the cabin’s overhead compartment at the direction of a flight attendant, the Washington Post reported. The Post found United had the highest animal death rates between 2015 to 2017. Not only was the airline transporting the most animals out of all the other American carriers, it was accepting higher-risk pet breeds that the others would not allow.

So United suspended its pet transportation program, PetSafe, to review the program and considered whether to continue transporting animals.

“In reviewing everything we had a difficult decision to make,” said Mike Oslansky, director of Cargo Operations Americas at United. “We either had to change our approach entirely, in terms of the transport of animals, or we had to make a decision as to whether or not we transport animals at all.”

They decided they would no longer transport 25 pet breeds that were at higher risk of injury or death when they traveled, including Boston terriers, bulldogs, and pugs. They also restricted crates from being taller than 30 inches, affecting large dogs.

Oslansky said United has “reduced the injury and death rate substantially” in 2018 because of the policy change.

Servicemembers who live in Japan have limited options to fly their pets as compared to Europe, Chiarotti said. The first option for servicemembers is to use a chartered military flight, but it only comes once a week and has limited space for pets. That means servicemembers who cannot get a reservation were left to find other means of transporting their pets when they change duty stations, such as using a commercial airline or a cargo shipment company.

With United’s policy now banning certain breeds, the alternative for military pet owners was to pay thousands of dollars in cargo fees to transport their pets. Last year, this affected about 400 dogs of servicemembers who were transported by United and “stranded in Okinawa,” Chiarotti said.

Chiarotti and other Marine leadership reached out to United, asking for help with the transportation of their pets.

“We were constantly reviewing with them what was happening and what we were going to do,” Oslansky said. “During that entire period, we were looking for ways to continue to help the military and it eventually evolved into what we now call the return home exception policy.”

The return home exception allows servicemembers who had previously shipped their now-banned pet through United’s PetSafe program to have them returned by the airline one more time.

“We realized and recognized that we were putting the military in a really bad position,” Oslansky said. “While we didn’t want to take any more animals outside of our new policy, we realized that we had already shipped a bunch of animals for military families to places all around the world who would now be stuck,” forcing families to decide what to do next with their animals.

This exception has been extended to July 31 to coincide with the peak summer military moving season. The Marines Corps estimates about 300 pets will be leaving Japan, Korea and Hawaii in the summer.

The Marine Corps also issued summer military orders in January, well ahead of its normal schedule of April and May, Chiarotti said. This allows families to have the time to make reservations on the military charter flights for their pets.

“I would say in years past -- myself included when I came back last summer -- we were at a disadvantage because we couldn’t compete for,” the charter flight, Chiarotti said. “So our families had to go send their pets commercial, consequently costing them more money.”

The spaces on the military charter flight for pets have also increased, going from 10 to 20 spaces, with 10 spots for large pets in the cargo area and 10 spots for smaller pets in the cabin, Chiarotti said. Before, all pets were put underneath the plane.

While United would be willing to work with the military if someone is in need of transporting their animal after the July deadline, Oslansky emphasized the risks to the animals during transit and also the risk to the airline’s reputation after changing their program due to this risk to the animals.

“This [policy] was put in place for the health, welfare, and safety of the animal and that’s our first priority,” he said. “And while we’re making this exception, there is risk. And I don’t want anybody to think there is no risk involved here.”

Oslansky asked servicemembers to talk with their veterinarian about the health of the animal and to go to united.com/petsafe to see what they can do to prepare their pet for the trip.

The Marine Corps have been educating Marines and their families who will travel to Japan about the possible costs and paperwork involved in moving their pet.

“You have to educate yourself. You have to understand what the costs are and what the challenges are associated with moving a pet overseas,” said Chiarotti. “There are options, but that you have to look into everything.”

Chiarotti said moving pets is a priority for the Marine Corps because their pets are members of the family.

“We would not ask anybody to leave them behind,” he said.