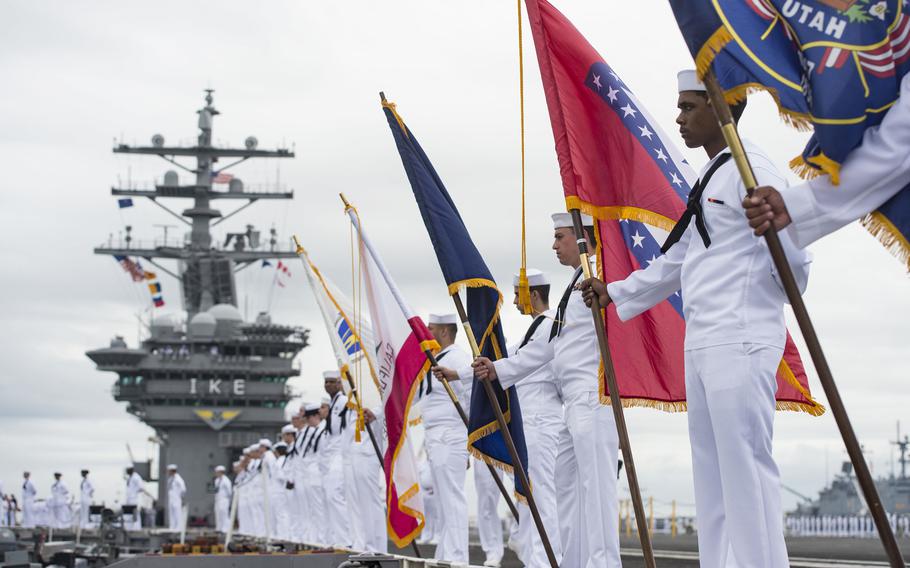 About 5,000 sailors are embarked on the ship, which departed Norfolk on June 1 for a scheduled seven-month deployment to Europe and the Middle East, where it will launch airstrikes against Islamic State targets in Syria and Iraq. The ship entered the Mediterranean Sea three days ago.

Naples is home to U.S. 6th Fleet, which controls all Navy warships in European waters. Port calls to the city are not frequent, with the last carrier visit made by the USS Nimitz in 2013.

The visit continues a busy month for Navy commanders in Europe. Another carrier, USS Harry S. Truman, is conducting airstrikes in the Eastern Mediterranean. The Navy is wrapping up its major exercise of the year, BaltOps, in the Baltic Sea. And it just deployed a ship to the Aegean Sea to join a NATO mission targeting people smugglers.

The Navy has said the Eisenhower will remain in the Mediterranean for several weeks. The carrier is joined on deployment by six escorts ‑ the guided missile destroyers USS Roosevelt, USS Nitze, USS Mason and USS Stout, and cruisers USS San Jacinto and USS Monterey.

The strike group is the first to fall under the Navy’s new deployment cycle for carriers, which attempts to limit carrier deployments to seven months.