Air Force secretary warns: 'We are too small for what the nation is asking us to do' 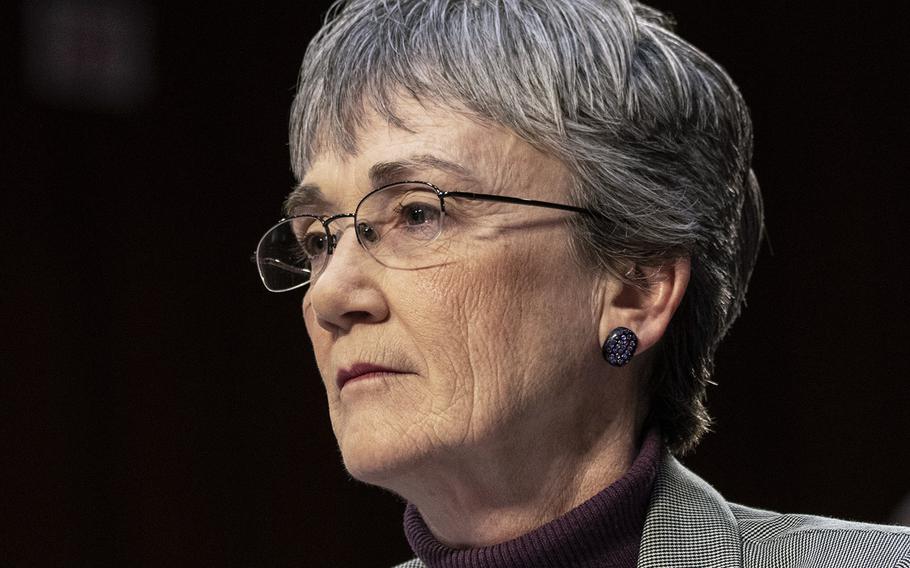 Buy Photo
Air Force Secretary Heather Wilson, seen here at a Senate hearing in March, 2019, says that "given the threats that we face ... we need to build a larger and more capable Air Force.” (Stars and Stripes)

Wilson, who was appointed Tuesday to become the next president of the University of Texas at El Paso, warned the House Armed Services Committee that U.S. Air Force squadrons are not on pace to meet great-power threats of Russia and China.

The comments were part of a hearing to defend the budget requests for the Army and Air Force. The Army is requesting $182.3 billion for its fiscal year 2020 budget, while the Air Force is requesting $156.3 billion.

“That’s a hell of a lot of money, certainly a lot more than a lot of our adversaries spend,” Smith said. “You cannot eliminate risk.”

Wilson said the service recognizes the American taxpayer might not be able to afford an aggressive leap in Air Force funding.

“We fully recognize that there are tradeoffs that are made and that the country may not be able to afford the Air Force that we need in order to execute the National Defense Strategy at moderate levels of risk,” she said. “That gap… represents risk and that risk is that we will not be able to accomplish the objectives that the combatant commanders have set out in their plans.”

Wilson’s warning comes on the same day the University of Texas at El Paso board of regents formally appointed her to the role of president. She became the sole finalist for the job last month.

Some lawmakers and other military officials lauded and chided Wilson for the move during Tuesday’s hearing.

“She is choosing to be a Texan and all of you could take a hint with that good judgement,” joked Texas Rep. Mac Thornberry, ranking Republican on the committee.

On Tuesday, Esper and Milley reiterated comments made before a Senate Armed Services Committee hearing last week. They said more than half of the Army’s brigade combat teams have achieved top levels of preparedness to fight a major ground war and could reach full readiness goals by 2022.

“We have a ways to go, a lot of work to do,” Milley told lawmakers. “And we appreciate your continued support.”