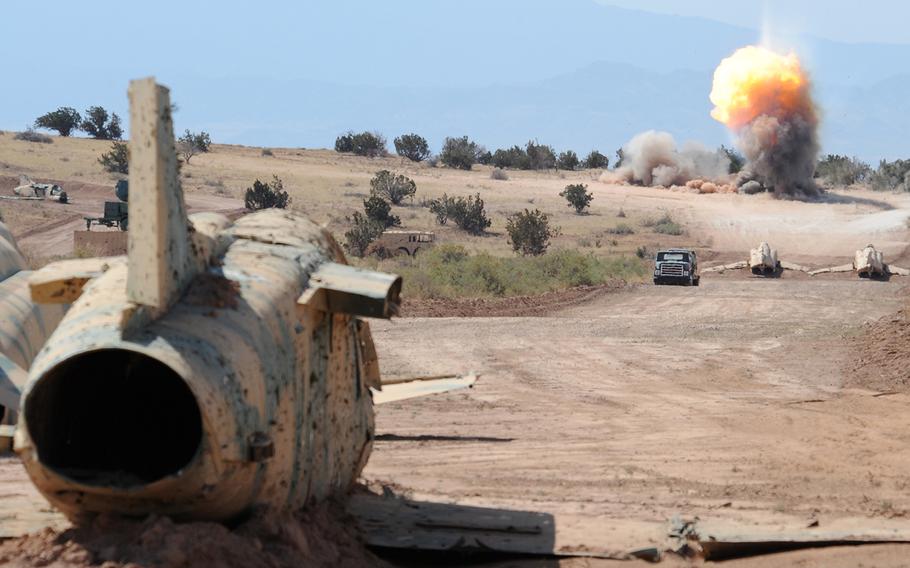 U.S. servicemembers from Holloman Air Force Base in New Mexico, work together to clear old ordnance and munitions at Red Rio Bombing Range throughout the month of June 5, 2009. The Air Force announced Friday, June 22, 2018, that an aircraft crashed at the range (Michael Means/U.S. Air Force)

One aircrew member suffered minor injuries and was airlifted to a local hospital, the Air Force said.

Information about the second aircrew member had not been released by the Air Force as of Friday evening.

The A-29 belongs to Holloman Air Force Base’s 49th Wing.

Fire and police units from the White Sands Missile Range Directorate of Emergency Services initially responded to the report of the crash, the Air Force said.

The cause of the crash is being investigated.

A ground-based military exercise near Holloman scheduled for Friday evening was canceled, the Air Force said.

The training flight, as well as the canceled exercise, were part of the Air Force's Light Attack Experiment, testing the capabilities of the A-29 and the AT-6B Wolverine. The second three-month phase of the testing began May 7.

The A-29 is a highly maneuverable, propeller-driven, light-attack plane.

The bombing range is part of the Army’s White Sands Missile Range, which is about 65 miles north of Holloman. It is the Department of Defense's largest, open-air test range, the Air Force said.