Air Force offering up to $75,000 to keep top enlisted as EOD specialists 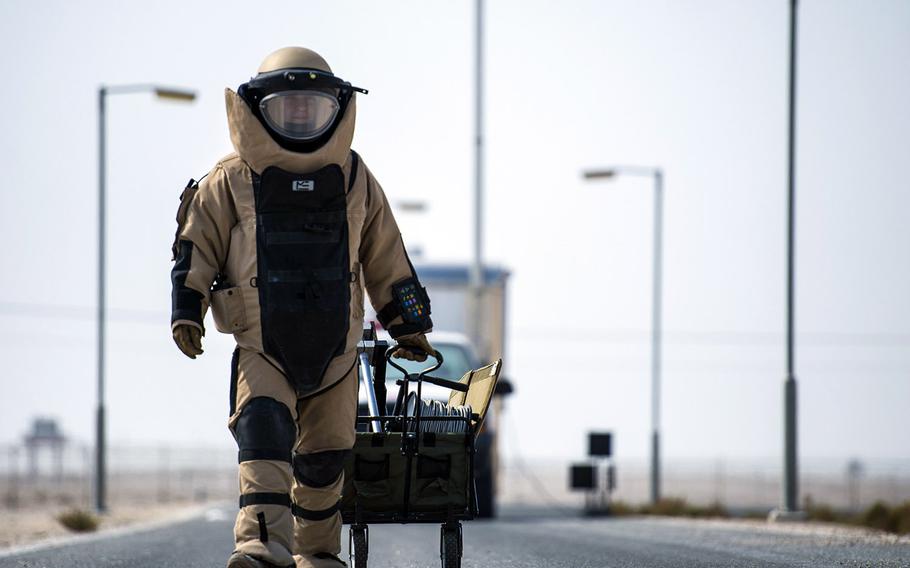 AUSTIN, Texas – The Air Force is offering bonuses up to $75,000 to entice the top enlisted ranks of explosive ordnance disposal airmen to push off retirement and remain on the job, according to a recent announcement by the Air Force’s Personnel Center.

Retaining the experience and knowledge gained from their years on the job will ensure the small career field remains strong, said Capt. Carrie Volpe, a spokeswoman for the Air Force secretary. Because of the field’s stressful mission of detecting and disarming bombs and heavy deployment rotation, Volpe said it can be difficult to keep enough senior enlisted EOD airmen to mentor and lead younger ranks.

“The high operational tempo and combat intensity experienced by the EOD career field make it difficult to stabilize manning at sustainable levels for senior noncommissioned officers,” she said. “The experience (senior NCOs) provide is key to executing the Air Force mission by ensuring highly trained and qualified (regular Air Force) airmen for the future.”

The bonus amount is $30,000 for a three-year service agreement, $50,000 for four years and $75,000 for five years, according to an Air Force news release. The offer took effect Jan. 29 and can’t be authorized retroactively.

Officials set a goal for the incentive to retain about 40 personnel in fiscal year 2019, which ends Sept. 30. Offering the bonuses required an exception to a policy. Typically, selective retention bonuses are not available to enlisted regular Air Force airmen with more than 20 years of active service or if the airman will complete 24 years of active service before the end of the contract including the bonus, Volpe said.

By retaining the experience of these senior leaders, she said it helps ensure the future strength and stability of the Air Force.

EOD is the only occupation where this waiver is available now and eligible servicemembers can’t have served more than 25 years of active duty. About 1,290 of the more than 321,440 active-duty airmen are part of this small career field, based on information from the personnel center. As the Air Force’s bomb squad, these airmen are trained to detect, disarm, detonate and dispose of explosive threats all over the world.

“Promoting younger NCOs may improve manning levels but won’t replace the lost experience, which would cause a ripple effect throughout the force for years to come,” Volpe said. “Senior NCOs have a wealth of knowledge that comes from their vast experience in both job performance and leadership. Those attributes are vital to train, manage and lead the upcoming airmen entering the EOD career field.”

Edgar Holt, re-enlistments program manager at the Air Force’s Personnel Center, said this type of bonus is intended to encourage qualified enlisted personnel to re-enlist in areas, such as EOD with this one, where there are retention shortfalls or when there are high training costs associated with losing experienced personnel.

For more information regarding this program, visit the myPers website or contact your local Military Personnel Flight Career Development section.