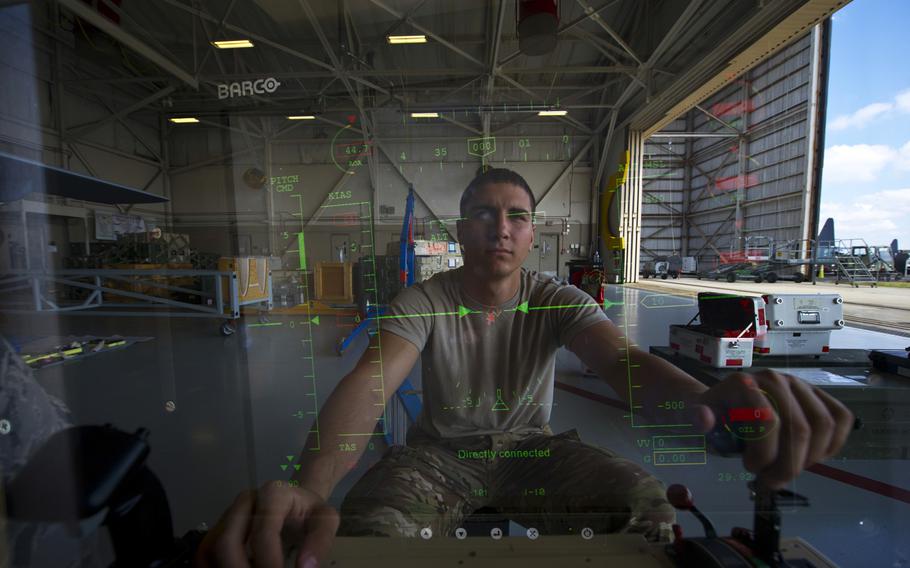 An Airman from Cannon Air Force Base sits at the control module of an MQ-9 Reaper at Hurlburt Field, Fla., April 23, 2014. ( John Bainter/U.S. Air Force)

WASHINGTON — The Air Force is considering bonus pay to address a major shortage of drone pilots, according to officials at Air Combat Command.

The demand for drones – which the Air Force calls “remotely piloted aircraft” – has skyrocketed over the past decade and continues to increase. Since the early 2000s, the number of combat air patrols has increased from just a handful to 65.

The Air Force is only at 85 percent of desired manning levels for drone pilots and that number is decreasing, according to Col. Ray “Raygun” Alves.

“We are maxing out our training pipeline right now,” but it’s not enough to match the number of drone operators who are leaving active duty, he told reporters during a conference call Thursday.

Alves, a division chief at Joint Base Langley-Eustis, Va., said the service is looking at ways to keep people in the field and to attract others. One possibility, he said, was to give them bonuses.

In 2013, the Air Force offered fighter pilots retention bonuses of up to $25,000 per year to address projected shortfalls. Alves said the service is considering something similar for RPA operators.

Alves, who previously piloted MQ-1 Predator drones, said he could not provide a dollar figure for the potential extra pay or say when it might go into effect.

He was asked whether the Air Force would consider a “stop-loss” policy to prevent drone pilots from leaving active duty if incentives didn’t work to achieve desired manning levels.

“I don’t want to rule anything out,” Alves said.

Pentagon leaders and combatant commanders continue to clamor for more sorties at a time when the RPA force is stretched thin. Drones are ideal for certain intelligence, surveillance and reconnaissance missions as well as strike missions, because they can loiter over a target area for long periods of time without putting airmen at risk.

“ACC believes we are about to see a perfect storm of increased… demand, accession reductions and outflow increases that will damage the readiness and combat capability of the MQ-1/9 enterprise for years to come,” Carlisle wrote, according to The Daily Beast, which first reported the document’s existence. “I am extremely concerned.”