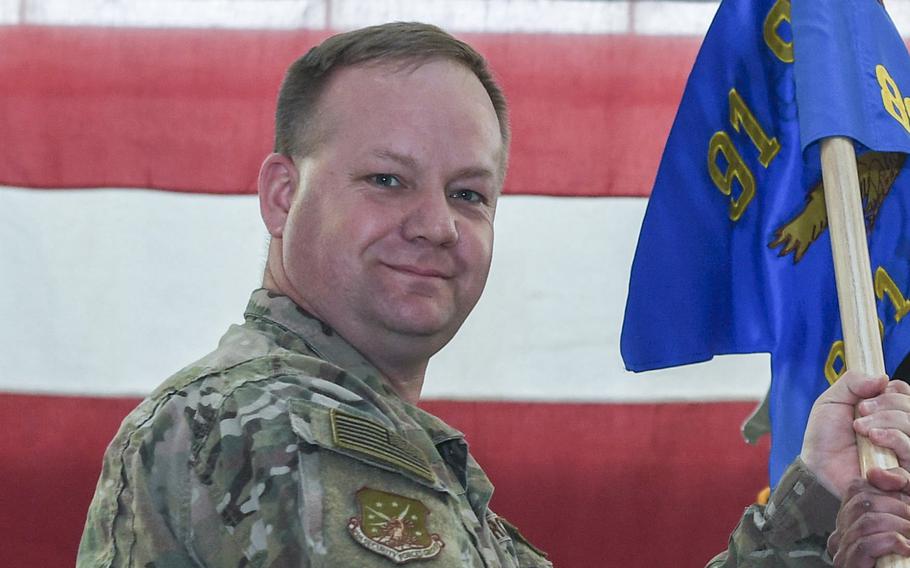 Col. Jason Beers, the former 91st Security Forces Group commander, takes part in a ceremony at Minot Air Force Base, N.D. on Nov. 5, 2017. Beers, who was removed from his post after explosives and a machine gun were lost in separate incidents, is slated to take a new assignment at Air Force Special Operations Command in Florida. (Jonathan McElderry/U.S. Air Force)

WASHINGTON — The former head of security forces at Minot Air Force base who was relieved of command last month after his airmen lost weapons and munitions will take a new assignment at Air Force Special Operations Command this summer, a service spokeswoman said Friday.

Col. Jason Beers will be assigned as the chief of installations division at AFSOC Headquarters at Hurlburt Field in Florida, said Air Force Capt. Amanda Farr, a spokeswoman for the command. In that role his responsibilities will include managing funding for AFSOC’s security forces and civil engineering personnel, and implementing policy for the installations division, she said.

“We are fully confident in the colonel’s ability to manage our security forces and civil engineer programs for the command,” Farr wrote in an emailed statement.

Beers was removed from his job as 91st Security Forces Group commander on May 23 by Col. Colin Connor, the commander of 91st Missile Wing. The unit is charged with guarding 150 Minuteman III nuclear missiles and 15 missile alert facilities at Minot in North Dakota, an 8,500 square-mile missile complex and a key part of the Air Force’s Global Strike Command.

Connor cited a “loss of trust and confidence” in removing Beers after “a series of events under the scope of his leadership, including a recent loss of ammunition and weapons.” Chief Master Sgt. Nikki Drago, the unit’s superintendent, was also fired.

Airmen with the 91st SFG lost a box of 40mm MK19 automatic grenade launcher ammunition off the back off a Humvee while traveling rural roads in North Dakota on May 1, according to the Air Force. The service launched a large-scale search for the missing ammunition and offered a $5,000 reward for its return but it was never found, officials said. The incident was considered an accident.

About two weeks later, an M240 machine gun was found to be missing from the unit during a routine inventory check, officials said.

The Air Force Office of Special Investigations is investigating the incident, which also prompted Global Strike Command to order a review of its inventory.