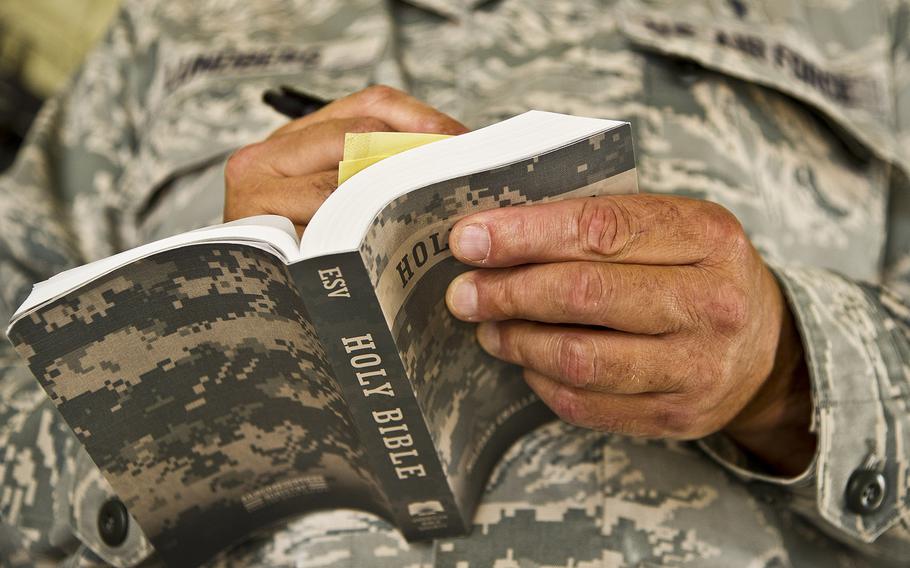 An Air Force chaplain reads from his Bible during a training scenario on Aug. 19, 2017. Air Force Capt. Sonny Hernandez, a chaplain with the 445th Airlift Wing at Wright-Patterson Air Force Base in Ohio, is under fire for saying that Christian servicemembers should not support the rights of other religions to practice their faith, saying “that will lead them to hell.” (Efren Lopez/U.S. Air Force)

An Air Force chaplain reads from his Bible during a training scenario on Aug. 19, 2017. Air Force Capt. Sonny Hernandez, a chaplain with the 445th Airlift Wing at Wright-Patterson Air Force Base in Ohio, is under fire for saying that Christian servicemembers should not support the rights of other religions to practice their faith, saying “that will lead them to hell.” (Efren Lopez/U.S. Air Force) 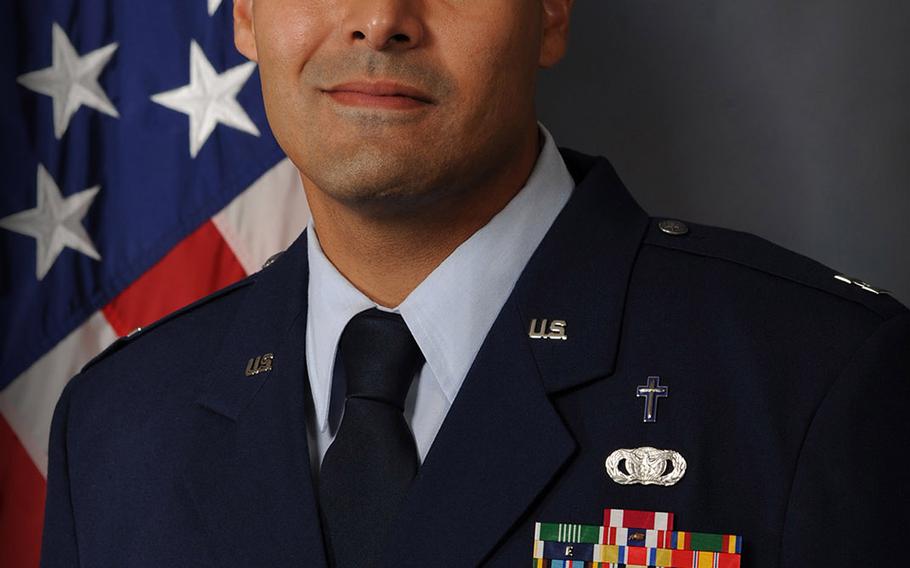 WASHINGTON — The Air Force said Tuesday it stands behind a Reserve chaplain who has come under fire for saying that Christian servicemembers should not support the rights of other religions to practice their faith because “that will lead them to hell.”

Capt. Sonny Hernandez, a chaplain with the 445th Airlift Wing at Wright-Patterson Air Force Base in Ohio, was called out for his controversial remarks last week. The Military Religious Freedom Foundation, which advocates on behalf of a pluralistic military with sharp separation of church and state, filed a new complaint to the Department of Defense Inspector General requesting it investigate Hernandez after the chaplain called Christian servicemembers who give credence to other faiths “counterfeit Christians.”

MRFF founder and president Mikey Weinstein said in a statement that Hernandez “blatantly and indisputably advocates the subordinating of the U.S. Constitution to his personal Christian ideology” and charged that he violated his military oath. Weinstein didn’t respond to voicemail and email requests Tuesday for comment.

The controversy raises questions over the role of chaplains and where the boundaries lie between spiritual leadership and innate freedoms of religion and speech guaranteed under the Constitution that all servicemembers swear to “support and defend.”

All chaplains must be certified as “willing to function in a pluralistic environment ... and to support directly and indirectly the free exercise of religion by all members of the Military Services, their family members and other persons authorized to be served by the military chaplaincies,” according to the Defense Department.

Hernandez says he was expressing a purely theological argument that there is only one path to spiritual redemption. He believes his role is that of missionary -- to share that message with as many people as he can.

“I am a Christian; I am 24/7, 365 days a year an evangelist and a missionary,” he said. “These are my moral principles and I have a standing objective to defend that.” His message, he said, is being misunderstood.

“We are all made in the image of God and we are good in God’s eyes,” he said. “And Christians should never mistreat anybody because they don’t believe in what you believe.”

Air Force Reserve spokesman Lt. Col. Chad Gibson said Hernandez is expressing his own views, not those of the Air Force, and his freedom to express his own faith is an essential protection in the military. The Air Force is not conducting an investigation, he said.

“I think we should reflect on why the Air Force is here,” Gibson said. “We are sworn to protect freedom of faith and religion unless it infringes on other people’s rights.” “That’s why we fight,” he said.

Hernandez is no stranger to controversy. He drew the ire of MRFF earlier this year when he publicly supported a post on christianfighterpilot.com that questioned the integrity of a newly promoted gay brigadier general who entered the military before “don’t ask, don’t tell.”

MRFF at the time called on the DOD IG to find Hernandez in violation of his military oath. The DOD IG did not respond to a request to confirm the investigations.

Undeterred, Hernandez continued to be outspoken about his strong faith. He says he speaks as a civilian on his own time, and his opinions are solely his. In his post last week, he espoused his views on what he believes is the only way to religious salvation.

“Christian servicemembers who openly profess and support the rights of Muslims, Buddhists and all other anti-Christian world views to practice their religions – because the language in the Constitution permits – are grossly in error and deceived,” Hernandez wrote. “Christian servicemembers must share the Gospel with unbelievers so they can be saved, not support unbelievers to worship their false gods that will lead them to hell.”

Hernandez is director of an evangelical Protestant organization called Reforming America Ministries, with a mission to evangelize, preach and “defend the faith” among Christians. He and other members travel as missionaries to college campuses and large gatherings like sporting events, concerts and gay pride parades to spread their message.

He said speaking out is within his rights under Air Force regulations protecting rights of expression and its “Rights of Conscience Protections,” that says servicemembers do not have to act against their conscience, particularly when it comes to religion.

He says that while his writings and his message are forceful -- his blog post also referred to homosexuals as being in the service of Satan -- his intent is theological, not against individuals. So while he doesn’t agree with the actions of people who don’t practice his faith, he still believes in his service as a chaplain.

He was his airlift wing’s Air Force Life Cycle Management Center Individual Mobilization Accession Company Grade Officer of the Year in 2015 and Officer of the Quarter again last year, which he says is evidence that he handles his job with respect. “A Christian can serve all people -- that doesn’t mean we have to support them,” he said. “I do believe everyone is made in the image of God and I love all people. That doesn’t mean I support all practices.”

Hernandez acknowledged that his words could be misconstrued as advocating discrimination against people of other faiths or practices. He is not advocating that anyone should “be abandoned or ostracized.”

“If I had to rewrite it, I would say this is my position,” he said. “In no way would I try to tell anyone they are not equal or that someone deserves to be mistreated or is not worthy.”