Air Force base will be first with all-electric vehicle fleet 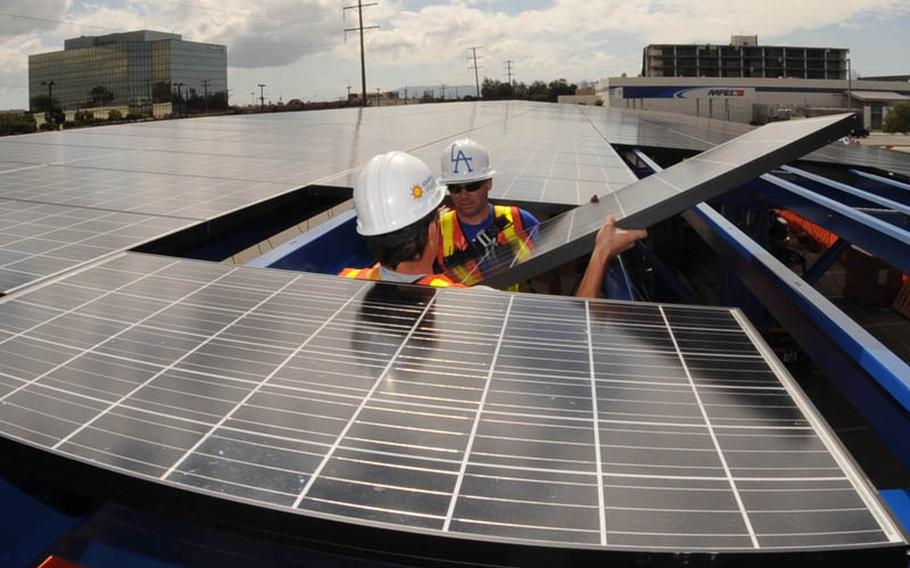 Workers install solar panels on a roof at Los Angeles Air Force Base that will help power an all-electric vehicle fleet debuting next year. (Lou Hernandez/Courtesy of U.S. A)

WASHINGTON - The Air Force, the fuel-thirstiest division in a Pentagon that itself is the federal government's top energy consumer, wants to begin cranking the spigot closed.

First on the alternative-fuel agenda will be cars, however, not aircraft.

Los Angeles Air Force Base, a small Space Command facility near Los Angeles International Airport, is scheduled to replace its entire fleet of cars, trucks and forklifts with electric and plug-in hybrid vehicles by early 2012. It would be the first federal facility with an all-electric fleet, Air Force officials said.

Though it would be just a drop in the bucket in terms of fuel savings, the real intention of the Los Angeles initiative is to help Defense Department energy wonks figure out how to wean other, larger bases off of petroleum-based ground vehicle fuel and drop out of the volatile international petroleum market.

"It's part of a broader DOD effort to look at large-scale integration of plug-in electric vehicles," Camron Gorguinpour, an Air Force civilian overseeing the introduction of electric vehicles, said in an interview with Stars and Stripes. "One of the things that stood out as a need for DOD was to answer the practical question: How do you actually manage an electric fleet?"

That means figuring out how to time the charging of the base's 45 vehicles, he said, because all of them sucking electricity at once would be far too heavy an electric load, though recently-installed solar panels at the base might help meet demand, he said.

Technicians will also experiment with using idle vehicles' batteries as backup power for the base, and even test the feasibility of selling battery power back to the local electric company to help meet power demands at a hefty premium. But Gorguinpour said that would only happen if it were determined it didn't leave vehicle batteries drained when they were needed.

The results of experimentation at the base will eventually carry to larger air bases with hundreds of vehicles. Those could be added to the all-electric initiative in coming years, Gorguinpour said.

Saving Mother Earth isn't the idea. Saving and making sure the Air Force has the energy it needs to carry out operation is the point, Kevin Geiss, Air Force deputy assistant secretary for energy, told reporters Tuesday.

The rise in crude prices has resulted in fuel prices for the Air Force 225 percent higher than a decade ago, Geiss said. The price of more than 2.5 billion gallons of fuel - primarily for aviation - accounts for most of a yearly Air Force energy budget of more than $8 billion.

Across the DOD, the push is on across the DOD for "green initiatives" to simplify supply lines, cut expenses and secure future energy sources.

The Navy is sinking $170 million into a program to help fund private biofuel development, while the Army last month launched a task force to identify large-scale renewables projects. The goal is to supply 25 percent of the Army's energy need by 2025 with solar, wind and other renewable sources.

"The lessons we learn ... will advance our ability to execute a large-scale procurement in the future," he said. "Hopefully the near future."