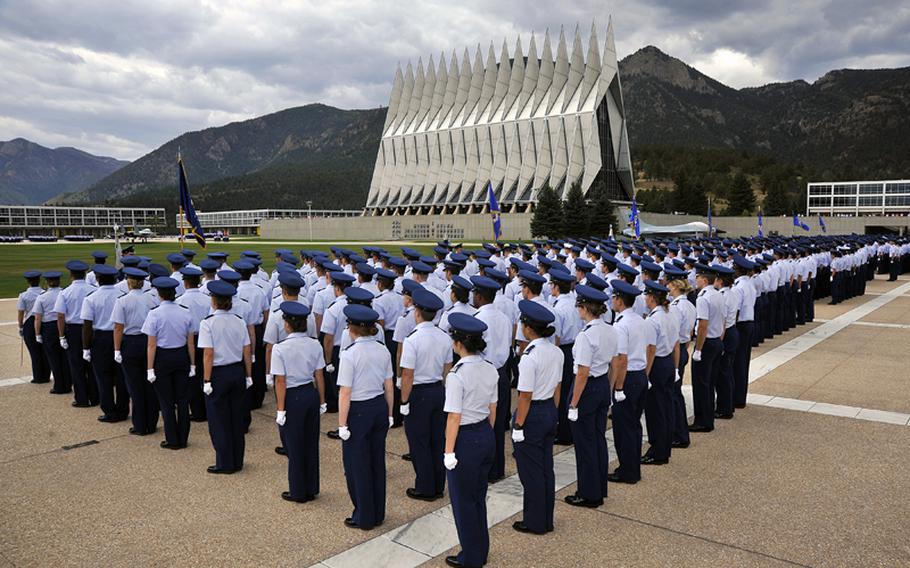 WASHINGTON — Gay rights advocates are demanding Air Force Academy officials explain why they hired a controversial anti-gay author as part of their ethics program, saying his views are offensive and potentially destructive.

It’s the latest controversy for academy officials who for years have fought to clean up their image as a haven for Christian fundamentalists. Advocates say it also raises questions about how seriously officials are working to end lingering discrimination against gay cadets.

Mike Rosebush, who now works as a research analyst for the academy’s Center of Character and Leadership Development, was hired by the academy in 2009, before the military’s “don’t ask, don’t tell” law was repealed.

The same year, he published “Sanctification Coaching: Sexual Purity and Peace for Christian Men with Same-Sex Attractions.” The book advocates using Christian teachings and prayer to overcome “wicked desires” like homosexual urges, and charts Rosebush’s own “struggles” to turn away from a gay lifestyle.

Before that, Rosebush was an active leader and speaker at numerous “conversion therapy” organizations, which maintain that same-sex urges can be overcome through discipline and prayer.

He is frequently cited by members of the National Association for Research and Therapy of Homosexuality, one of the leading groups in that field. His writings are featured prominently on the website of Strength in Weakness, which offers counseling to resolve “unwanted same gender attractions.”

Rosebush declined interview requests on his background or current role. In an email provided to Stripes, he said he no longer takes part in that type of counseling work.

Academy spokesman Maj. Brus Vidal said Rosebush “has had no interaction with cadets at any time since he was hired in 2009” and “does not and will not evaluate or counsel cadets.”

But Josh Seefried, a rights advocate and a founder of the former rights group OutServe, said he recently met with Rosebush during a visit to the academy and found their conversation disconcerting.

“It was clear to me he still held these beliefs,” Seefried said. “This was my first real experience with someone suggesting ex-gay therapy to me, and I found it very uncomfortable.

“This man is no small figure in the movement, either. Some of the groups he has worked with are among the biggest anti-gay organizations out there. And this approach is one of the most dangerous and insulting things someone can say to gay people, that you can be fixed.”

Officials have praised Rosebush’s work, noting that they have received no complaints about his role ensuring the the high quality of coaches in the ethics courses.

But leaders of the American Military Partner Association -- which provides support for gay troops and their civilian partners -- in a statement called employing Rosebush in any aspect of the academy leadership program an unconscionable decision.

“It is extremely disrespectful and offensive to not only the gay and lesbian cadets at the academy, but the thousands of gay and lesbian service members and their families proudly serving our nation,” said Stephen Peters, president of AMPA.

The advocacy group Truth Wins Out on Tuesday demanded Rosebush be fired.

“The repeal of Don’t Ask Don’t Tell sent a message that the United States Military will no longer be a home for anti-gay bigotry and discrimination,” group executive director Wayne Besen said in a statement.

“Hiring a counselor like Rosebush sends a message that perhaps the Air Force Academy isn’t serious about creating an environment where all cadets are treated equally.”

Vidal declined comment on whether Rosebush’s past writings and speeches were reviewed before he was offered a job, saying that the academy does not have records on his hiring process.

Seefried said he has spoken to cadets at the academy who were upset to learn of Rosebush’s past, noting that several have complained about a discriminatory culture toward gays at the school.

Unlike the other advocates, Seefried said he believes Rosebush could remain at the academy without hurting morale, but only if he publicly recants his past teachings. He also hopes the academy uses the latest controversy to “re-examine the culture there” and look for ways to prevent discrimination.

Academy officials declined to answer questions about changes made in the ethics courses or cadet conduct policies in the wake of the “don’t ask, don’t tell” repeal.