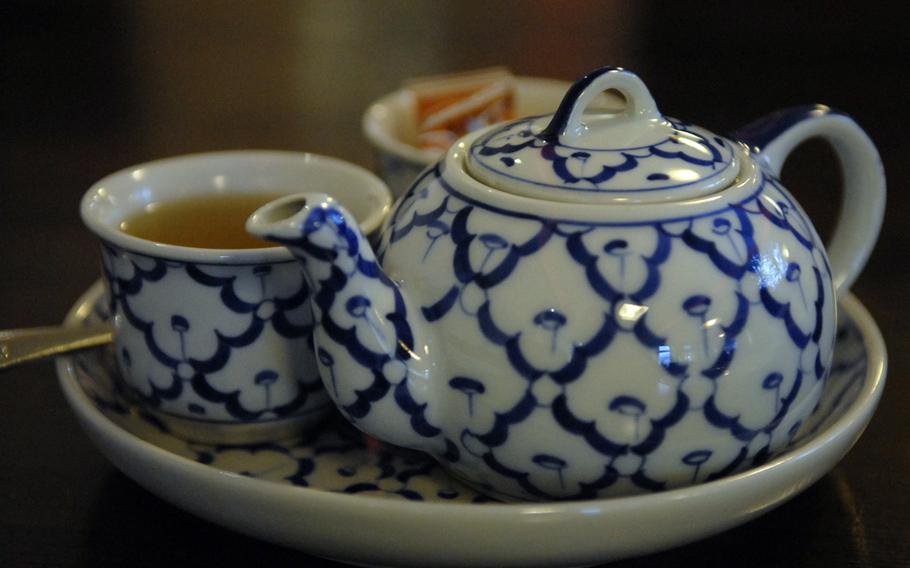 Hot oolong tea, as it is served at Zimtblüte restaurant in Einsiedlerhof, Germany. (Jennifer H. Svan/Stars and Stripes)

Hot oolong tea, as it is served at Zimtblüte restaurant in Einsiedlerhof, Germany. (Jennifer H. Svan/Stars and Stripes) 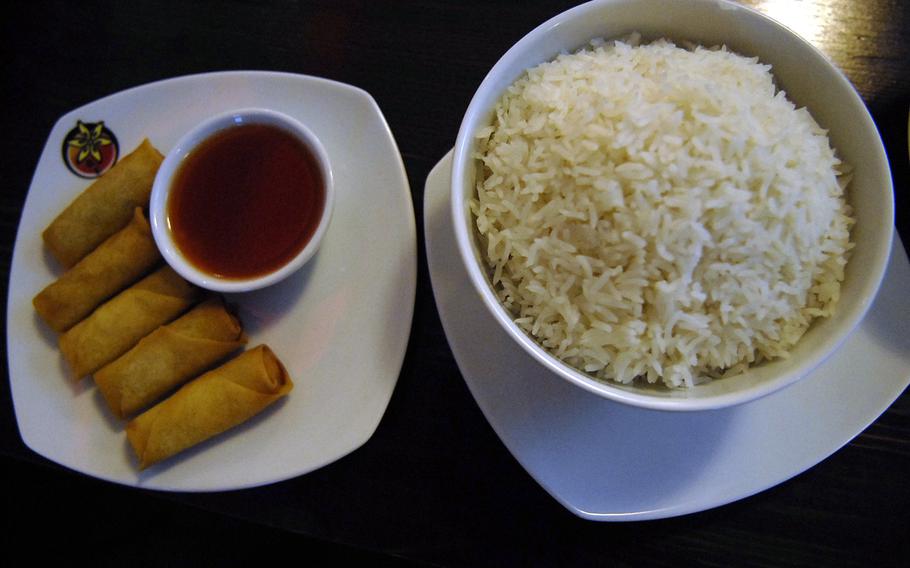 Vegetarian spring rolls sit next to a steaming bowl of rice at Zimtblüte, an Asian food restaurant in Einsiedlerhof, Germany. (Jennifer H. Svan/Stars and Stripes) 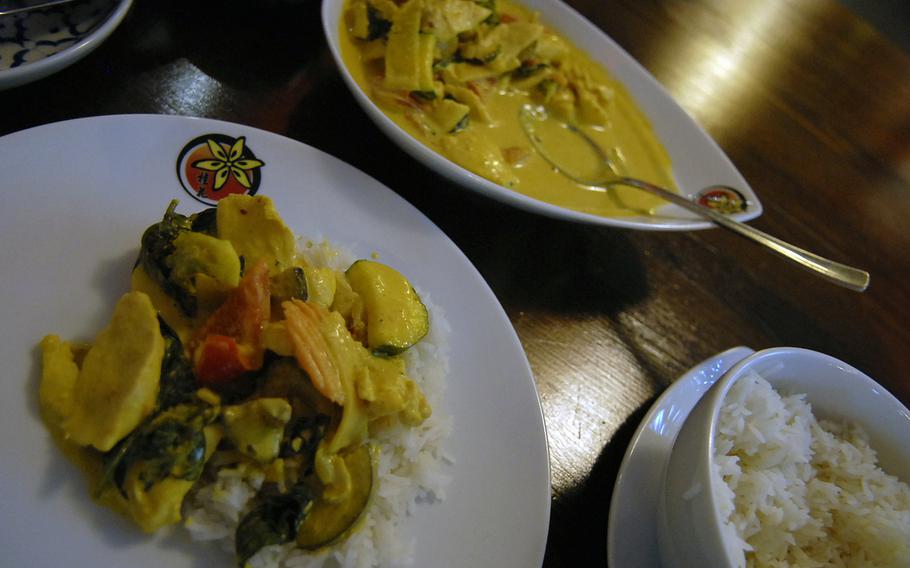 Zimtblüte restaurant in Einsiedlerhof, Germany, serves a variety of Asian food, including chicken and vegetables in a yellow sauce of green curry and coconut milk. (Jennifer H. Svan/Stars and Stripes) Zimtblüte, or "cinnamon blossom" in German, is a restaurant in Einsiedlerhof, Germany, specializing in Asian food. (Jennifer H. Svan/Stars and Stripes) 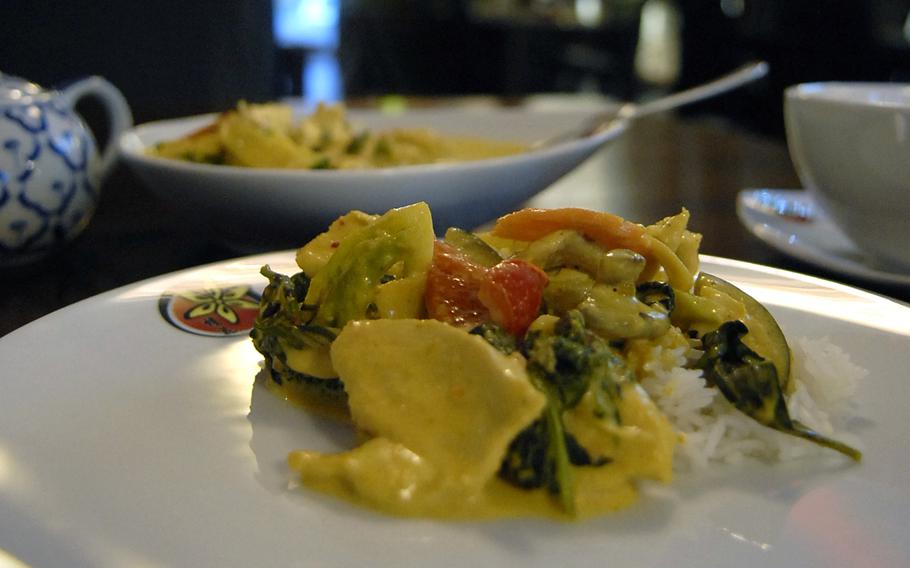 The chicken breast with green curry, coconut milk and vegetables with rice is one of several Thai dishes available at Zimtblüte, a restaurant specializing in Asian food in Einsiedlerhof, Germany. (Jennifer H. Svan/Stars and Stripes)

The two red chili peppers pictured on the menu next to the chicken curry entree gave me reason to pause.

I like curry with a bit of a kick but not the “Help, my tongue is on fire!” kind.

Staring back at me on the two-page “Thai dishes” section of the menu at Zimtblüte, an Asian food restaurant in Einsiedlerhof, Germany, were columns of double red chili peppers. Apparently there was no such thing as mild curry. Happily, I was told by one of the servers that the spice level of most dishes can be adjusted, up or down.

So I requested “medium spice” and waited — all of about 10 seconds.

That’s how fast the food arrived. Ten seconds might be an exaggeration, but it was definitely less than 10 minutes, causing me to wonder what sort of magic just happened in the kitchen to make the food appear seemingly moments after I shut the menu.

The speediness of service is one of the best things about Zimtblüte, as certain as the sweetness of the restaurant’s signature homemade iced tea.

It’s possible to get in and out in less than an hour, making Zimtblüte a good option for lunch during the work week — and a not-so-fearsome undertaking for families with small children.

Of course, if the food tasted bad, no one would care about the service.

But that’s not the case, from what I have experienced while dining at Zimtblüte on many occasions.

Zimtblüte means “cinnamon blossom” in German, named after a member of the restaurant owners’ family. For years, the place was called Lucky Chinese. But after it changed hands several years ago from mother to son, the establishment was reinvigorated with a new name, a renovation and a slightly updated menu.

The son is Gwo-Yueh Rudolf Kuo, who runs Zimtblüte with his wife, Thi-An Hong, along with extended family members and close friends, from the wait staff to the cooks. The family also runs an Asian food imbiss inside Globus also called Zimtblüte.

The Einsiedlerhof restaurant has been in the family since 1985, when Tsui-Lan Hu — Kuo’s mother — opened it after moving to Germany from Taiwan.

Anyone who frequented Lucky Chinese would remember Hu. She was a fixture at the front counter, taking (and often suggesting) orders and plying patrons waiting for takeout with her homemade sweet tea.

“Tell your friends we are open Thanksgiving,” I remember her telling me before the holiday several years when I was picking up food.

Once, when I was wavering over a “to-go” menu choice, she suggested the sesame chicken breast.

When the restaurant re-opened under its new name, I ordered the sesame chicken. This time, it didn’t knock my socks off, so, with a sad sigh, I concluded I was not a fan of the new restaurant.

But I returned. And on one of those subsequent visits, Zimtblüte bloomed a bit brighter in my eyes. Now I’m a Zimtblüte junkie.

Until recently, I was hooked on one dish, ordering the vegetarian fried rice every time. (With its spiceless quality, it was also kid-friendly.)

What’s amazing about this meal is that the plethora of vegetables — spinach, broccoli, bell pepper, bean sprouts and shredded carrots — mixed in with a sizable portion of scrambled egg made me forget there ever was such a thing as fried rice.

On my last visit to Zimtblüte, a kids-free work outing, I decided it was time to kick my fried rice habit and order something on the wild side.

I settled on the chicken with green curry, vegetables and coconut milk. It was spicy, to the point where I regretted having finished my oolong tea, but nothing I couldn’t handle.

The food tasted fresh and the creamy coconut milk, teamed with an array of vegetables from eggplant to bamboo shoots, made it my new favorite dish.

“We want to make it better,” Hong said of her family’s efforts to improve upon the Lucky Chinese era.

Hong, who speaks Vietnamese, German and English and is learning Chinese from her 5-year-old son, said Zimtblüte is popular among Americans, which comprise about 90 percent of the restaurant’s clientele.

“Americans love sweet tea,” she said. “My mom (in-law) is really proud about that.”

Directions: From Vogelweh, drive east on the L395, turn right on Jacob Pfeiffer Strasse and head toward Ramstein Air Base. Zimtblüte is on the left, next to Hacienda Mexican restaurant and before the entrance to the Mannheim-bound A6 highway.

Food: A variety of Asian food, including Chinese, Thai and Vietnamese.

Costs: Lunch specials from 11 a.m. to 2:30 p.m. Monday to Friday (except for German holidays) cost 5.90 euros to 7.50 euros. Meals from the regular menu range from 7.50 euros for fried rice to 16 euros for udon noodle soup with king prawns.