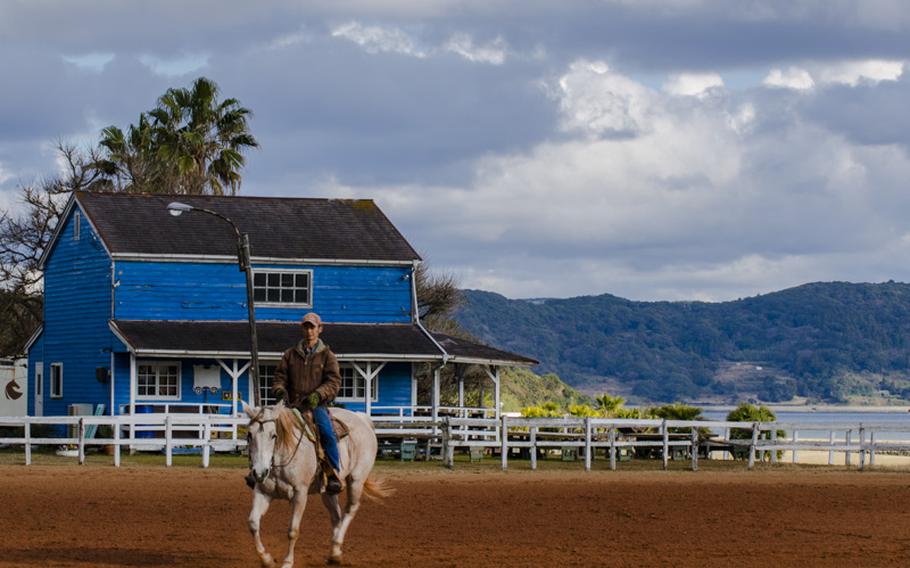 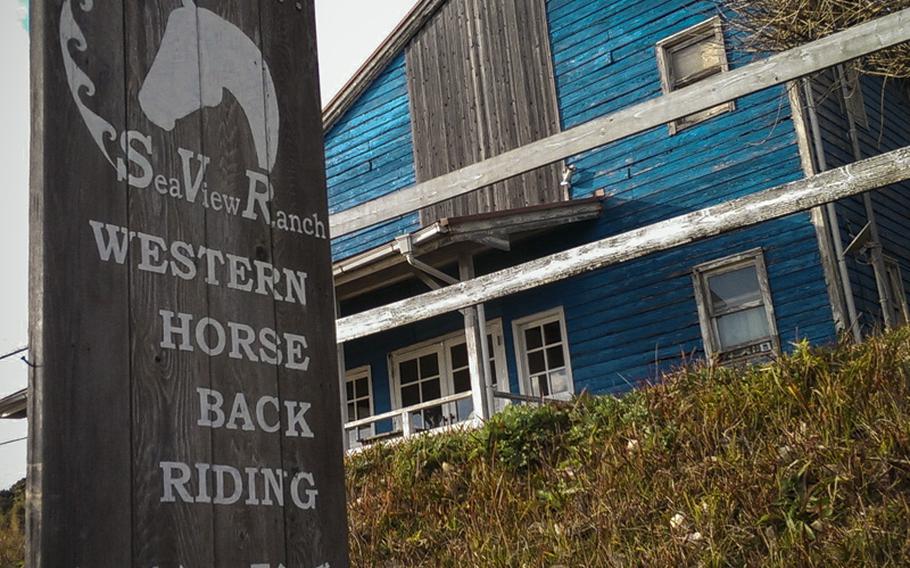 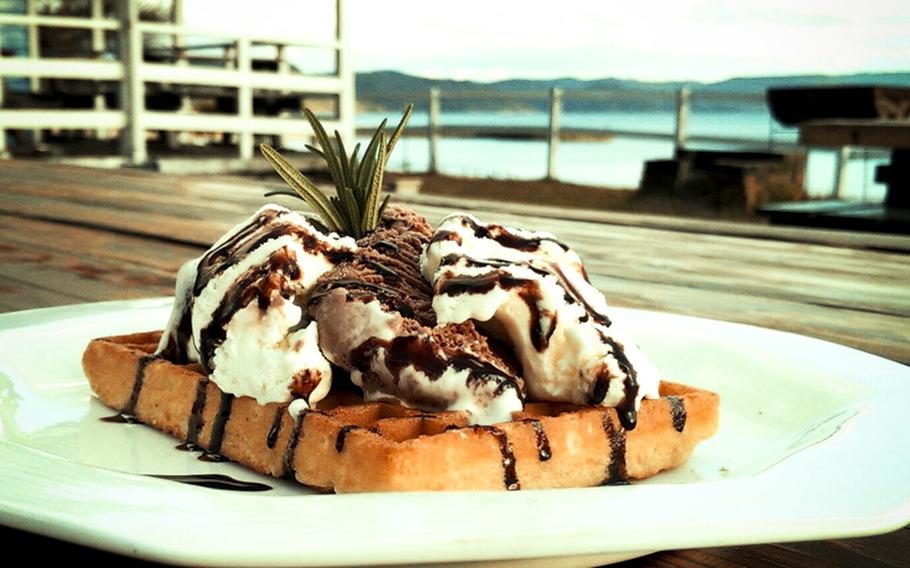 Homemade waffles and ice cream is one of the most popular dishes served by the Sea View Ranch in Hirado, Japan. The ranch also has a full family restaurant and saloon for its guests. (James Kimber/Stars and Stripes)

Hirado is a rather large island off the coast of Kyushu, near Sasebo. Given its sparse population, a hybrid of economies emerges with the unusually high percentage of land ownership by the acre here. Rice and vegetable farms blend in with churches on the horizon, contrasting with Buddhist temples and Shinto shrines. The smell of sea air and green tea plants mixes aromatically with steamed fish from the kamaboka shops that make Hirado famous. It’s in the middle of this unique environment that the Sea View Ranch can be found.

The Matsuishi family opened the ranch and saloon in 1986 in Hirado’s Ichikawa-cho. The rustic blue house looks like it belongs in Montana despite the beach across the street and the terraced rice fields to the east.

Owner Toshio Matsuishi is almost always wearing a plaid shirt and jeans as he greets his guests with a firm, rough grip only achieved by those who have spent decades on the range. In addition to offering horseback riding lessons and caring for the horses, he flies back and forth from Japan to Texas to import horses for the ranch, making his English impeccable. His wife, Akemi, runs the saloon and restaurant, preparing her own recipes ranging from steaks to cakes to mixed drinks. Though her menus are exclusively in Japanese, there’s no inconvenience for English-speaking diners despite the language barrier.

While Toshio’s horses bring people to the ranch, it’s Akemi’s menu that keeps everyone there, including my family. The handwritten menu features locally raised Hirado beef, which, like Kobe, Mishima and Matsusaka, comes from the Japanese black cattle, or kuroge washu, and is famous for its naturally occurring marbling of fat. (The peppered steak grabbed my attention.) Unlike the much more aggressively marketed Kobe beef, Hirado steak doesn’t generate the same hype or command the same price. Yet I can say from experience that each bite melts in your mouth just as the more expensive Kobe label does.

Having just eaten on the day we visited, the dream of enjoying the ranch’s beef would have to wait for another day. But dessert seemed a worthy consolation prize. I had the waffles and ice cream, my wife ordered the apple pie, and our girls, ages 2 and 4, each opted for chocolate ice cream.

If you can imagine Michael Landon’s character from “Little House on the Prairie” becoming a Texas oil man living in 1980s Dallas, then you can get a sense of the dining room. The floors creak with age and the handmade tables were crafted in Toshio Matsuishi’s garage. Leather hides drape over the railings, oil paintings of the old West hang above the tables and over-the-top sized skulls of Texas longhorns ensure there’s no square inch of wall left bare. Bourbons from Tennessee and Kentucky stand proudly behind the American beers on tap.

Our desserts came out quickly. The waffles, despite being homemade, were perfectly shaped rectangles dressed with two scoops of ice cream and skillfully drizzled chocolate syrup. You could taste every bit of care Akemi Matsuishi took in baking the simple treat. While she took years perfecting her recipe, I took seconds to inhale it.

The apple pie, also homemade, smelled exactly like my grandmother’s. Even as a true Southern church lady, she may have let a profane word slip after tasting Akemi’s version of the American classic. The ice cream, while not Akemi’s own recipe, is locally made. Our daughters didn’t seem to care either way as they devoured their frozen desserts in 0.64 seconds flat.

Serving: Locally raised Hirado beef, homemade desserts, mixed drinks and beer. Address: 35 Ichikawa-cho, Hirado, Nagasaki Prefecture 859-5132. The restaurant is about a 45 minute drive away from Fleet Activities Sasebo Google Map Phone: 0950-24-2338 Hours: 9 a.m. to 7 p.m. daily, though the place can stay open longer if there are still orders coming in Dress: Casual Cost: Lunch costs about $12-15; dinner runs about $20-40, as steak is essentially the only choice; dessert costs about $5-7. Access to the horses ranges from a simple feeding to competition training and prices vary significantly depending on the level of interaction. Website: svr.jpn.com (Japanese only, but it can be understood by running it through Google Translate.)