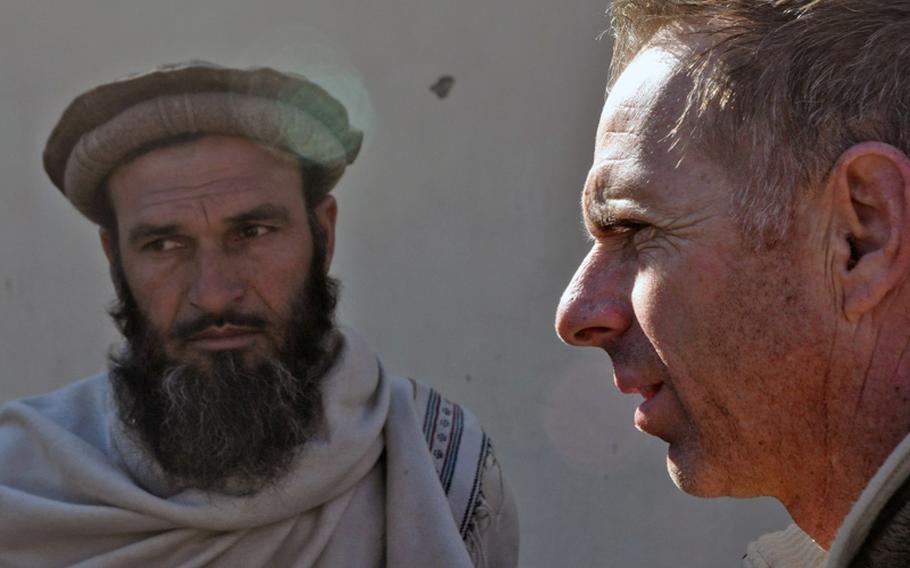 Lt. Col. Dan Wilson, right, met with local officials and tribal elders in the village of Nishigam in Kunar province days after a Dec. 9 suicide bombing outside a nearby mosque killed six people, including the police chief. (Martin Kuz/Stars and Stripes)

Lt. Col. Dan Wilson, right, met with local officials and tribal elders in the village of Nishigam in Kunar province days after a Dec. 9 suicide bombing outside a nearby mosque killed six people, including the police chief. (Martin Kuz/Stars and Stripes) 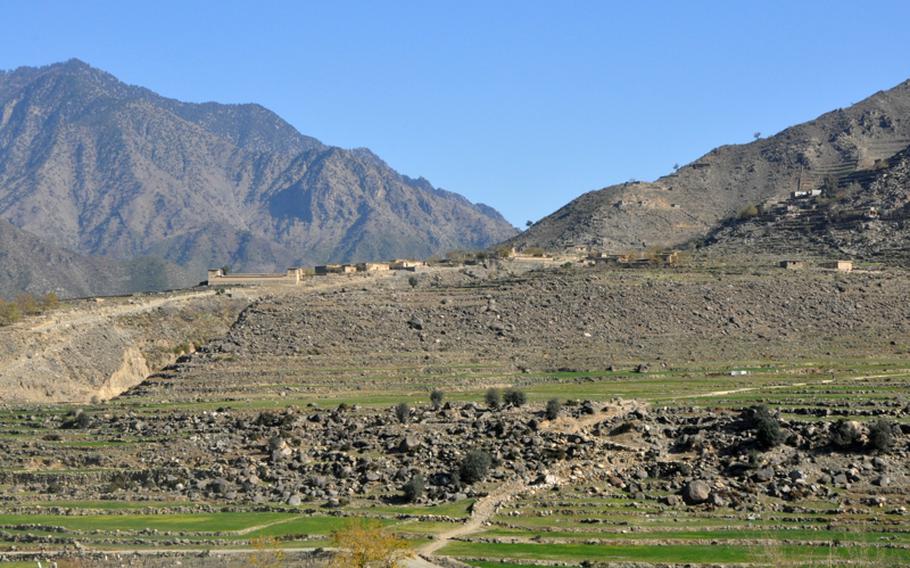 The village of Nishigam in the Kunar River Valley is five miles from Pakistan, which lies beyond the mountains in this photo. On Dec. 9, a 12-year-old Pakistani boy who had slipped over the border detonated a suicide bomb outside the village mosque, killing six people, including the police chief. (Martin Kuz/Stars and Stripes) 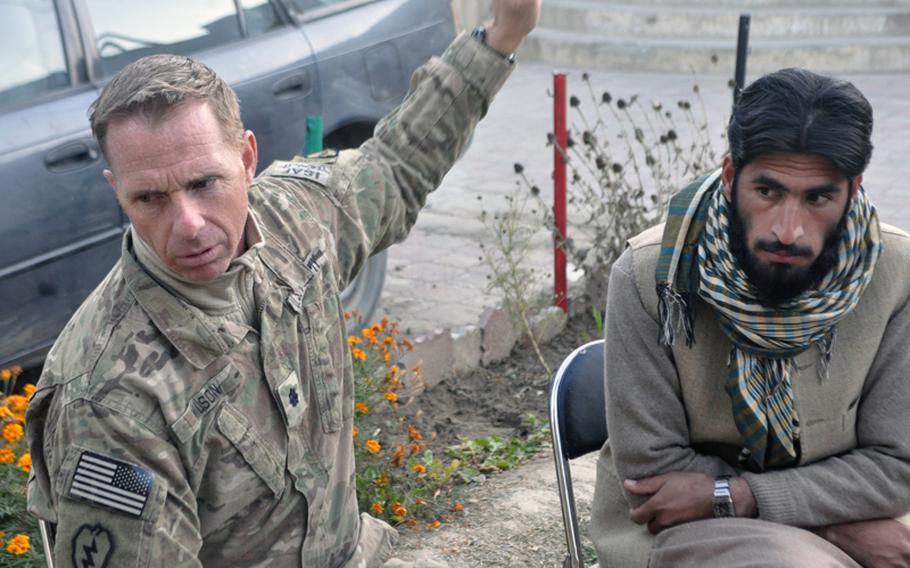 Lt. Col. Dan Wilson, left, met with Abdul Wahab, district subgovernor of Ghaziabad, and other local officials days after a Dec. 9 suicide bombing outside a mosque in the village of Nishigam in Kunar province killed the local police chief and five other people. (Martin Kuz/Stars and Stripes)

The 31-year-old police sergeant, works in the Nishigam government center in the Ghaziabad district of northern Kunar province, five miles from Pakistan. The region remains strangled by the insurgency a decade after the start of the U.S.-led war against the Taliban.

On Dec. 9, Mohammed Ishmael, the Ghaziabad police chief and Latif&rsquo;s boss, drove from the compound to the village mosque with Mali Khan, an Afghan intelligence officer.

They walked out together in the early afternoon after prayers ended. Lurking nearby was a 12-year-old Pakistani boy. It is unknown if either man saw him approach.

Latif had stayed behind at the district center a quarter-mile away. The walls trembled from the explosion. He soon learned of its location and rushed to the mosque.

Ishmael and Khan were among six people killed. An Islamic extremist group in Pakistan with ties to the Taliban and al-Qaida claimed responsibility.

The blast occurred three days after suicide bombings near a religious shrine in Kabul and a mosque in Mazar-e-Sharif killed more than 60 people.

The motive for the Nishigam attack remains unclear. The anger of police is transparent.

Ishmael, 37, seldom occupied his small office at the district center. He traveled to villages in Ghaziabad&rsquo;s capillary valleys, deep in the Hindu Kush mountains, trying to sow confidence in the fledgling Afghan police force.

Short and thin, with an ash-colored beard and vanishing hairline, he had an open, untroubled manner.

&ldquo;I always warned him about being out in public,&rdquo; Latif said. &ldquo;But he wanted to show he wasn&rsquo;t afraid.&rdquo;

The suicide bomber arrived in Nishigam from Pakistan. Someone in or close to the village provided refuge to the boy for at least several hours, and perhaps days, after he slipped over the border.

Kunar&rsquo;s tribal divisions and severe geography, combined with fraud at all levels of Afghan government, have stymied efforts to bring more roads, schools, health clinics and jobs programs to the province.

The Taliban exploits the conditions, bribing villagers to act as lookouts, store weapons and offer safe haven to insurgents.

&ldquo;People who live far back in the valleys haven&rsquo;t seen the government do a lot,&rdquo; Latif said. &ldquo;They don&rsquo;t see why they should work with us.&rdquo;

He shook his head. &ldquo;The Taliban knows this and they say, &lsquo;Help us and we will give you money.&rsquo;&thinsp;&rdquo;

I spoke to Latif with the help of Muhammad Iqbal, 23, an Afghan interpreter who faces his own kind of duress from the Taliban.

Iqbal works with the 2nd Battalion, 27th Infantry Regiment stationed at Forward Operating Base Bostick, about 15 miles north of Nishigam. He has served as an interpreter with Army units in the area since 2005.

His job has brought threats from the Taliban against him and his family, who live in northern Kunar. He refuses to quit.

&ldquo;All the Afghans who are helping coalition forces deal with this kind of danger,&rdquo; he said. &ldquo;If everybody gives up, nothing will ever change.&rdquo;

His long tenure as an interpreter has made him a bridge between outgoing and incoming Army battalions.

He thinks U.S. forces have made gradual progress in the province.

&ldquo;But it will be hard for the Afghan military when the U.S. goes,&rdquo; he said.

&ldquo;I am worried there will be more violence.&rdquo;

Iqbal, who wore a brown North Face hoodie, has dark, feathered hair, a speed-of-sound style of talking and an animated nature more typical of Americans than his countrymen.

Alas, Afghans seeking a U.S. visa must endure a process almost as complex and prolonged as the war.

&ldquo;It is very, very difficult to get one,&rdquo; he said. &ldquo;There is so much paperwork. But I am not giving up.&rdquo;

I joined Latif, Iqbal and Capt. Matt James of the 2-27 to drink green tea on a cold night in the unheated district center. As we talked about the insurgency, Latif pulled out his cellphone to show us a Taliban promotional video.

They shot .50-caliber machine guns in the desert, crawled through a drainage pipe on an obstacle course and dived fully clothed into the glass-smooth water of a tiled pool that you might see at a Monaco spa.

All of us laughed when masked men dressed in black ninja-like pajamas appeared on the screen and began pummeling one another with martial arts moves. James, 30, of Lititz, Pa., supplied the punch line.