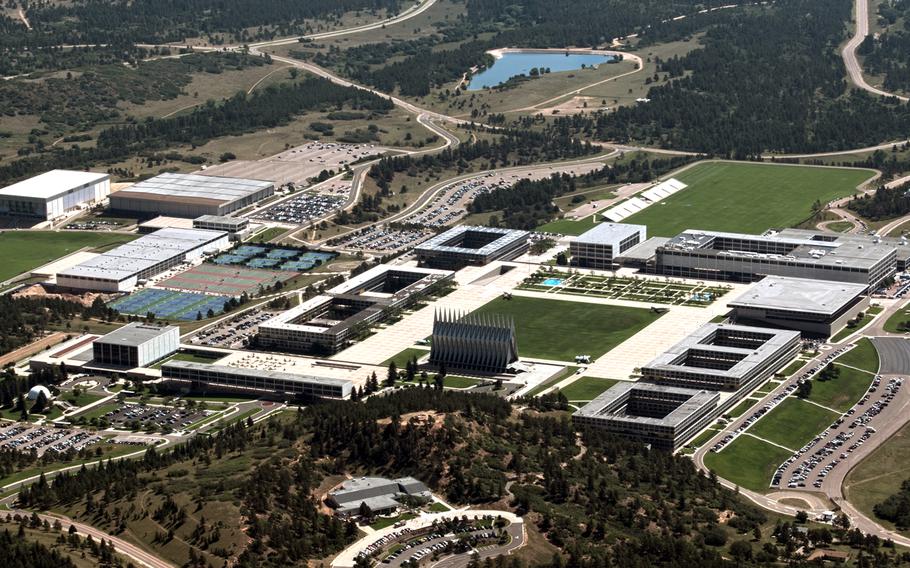 The Air Force Academy's Cadet Area, as seen from the summit of Eagle Peak. (Don Branum/USAF)

WASHINGTON -- Air Force Academy officials will review their hiring procedures to ensure practices are “legally sound, equitable and unbiased” in response to news that the institution employs a controversial anti-gay activist within its ethics program.

But academy leaders insist that officials have found no problems with his employment record or performance, and heard no complaints from cadets about his presence at the school.

Mike Rosebush, who works as a research analyst for the academy’s Center of Character and Leadership Development, was hired by the academy in 2009, before the military’s “don’t ask, don’t tell” law was repealed.

Academy officials said that Rosebush has no direct contact with students and is not crafting ethics lessons for cadets. His job is behind-the-scenes research, to determine the effectiveness of the courses.

But gay rights advocates have questioned that role, and said his mere presence at the school is an insult to gay students, faculty and alumni. Several groups have called for his immediate firing.

On Friday, officials from the American Military Partner Association -- a gay-rights advocacy group focused on servicemembers and their families -- called for an independent investigation of Rosebush’s hiring and the culture at the academy.

“We have grave concerns about how these gay and lesbian cadets are being treated, whether the Academy leadership is truly committed to creating a non-discriminatory culture, and whether an effective reporting and investigative system exists to give these future military leaders a proper avenue of redress,” group president Stephen Peters said in a statement.

In a statement Friday, Academy Superintendent Lt. Gen. Michelle Johnson called Rosenbush’s employment “a raw and emotional issue” and said the school “prides itself on its inclusive environment and is absolutely a safe and validating place.”

“By fostering a culture of dignity, respect and inclusion for all we continue to positively mold these young men and women and properly prepare them to defend our nation’s freedoms,” she said.

On Friday, Academy officials coordinated a media call with several members of the school’s gay-straight alliance, Spectrum. They refuted reports of problems with the academy’s culture toward gay students, saying they believe their fellow cadets and school leadership are supportive.

Three cadets -- whose identities were withheld by the academy, for privacy reasons -- said they have had no interaction with Rosebush.

“It disappoints me that someone like that is on our faculty,” one of the cadets said, “but he is allowed to think what he wants. As long as he doesn’t pressure others, that’s fine.”

The cadets said they have faced homophobic and discriminatory individuals at the academy, but characterized those interactions as isolated events that have little to do with military life. They bristled at suggestions that the academy has fostered an anti-gay culture.

But outside rights advocates maintain the school has serious discrimination problems, and labeled that media availability as a nothing more than show.

The Military Religious Freedom Foundation on Thursday released a letter purportedly from a closeted cadet who said that being openly gay at the academy “would be devastating for our cadet and future Air Force careers.”

The cadet called Rosebush’s employment unsettling, and said many gay cadets “live in the worst fear of being outed at any moment and suffering for it.”

Other rights advocates said they heard similar concerns from gay cadets before they claim academy officials warned the students not to speak to media or outside groups.

He also said many of the critics of the academy have been heightening tensions by spreading false information about Rosebush’s job and the academy’s response.