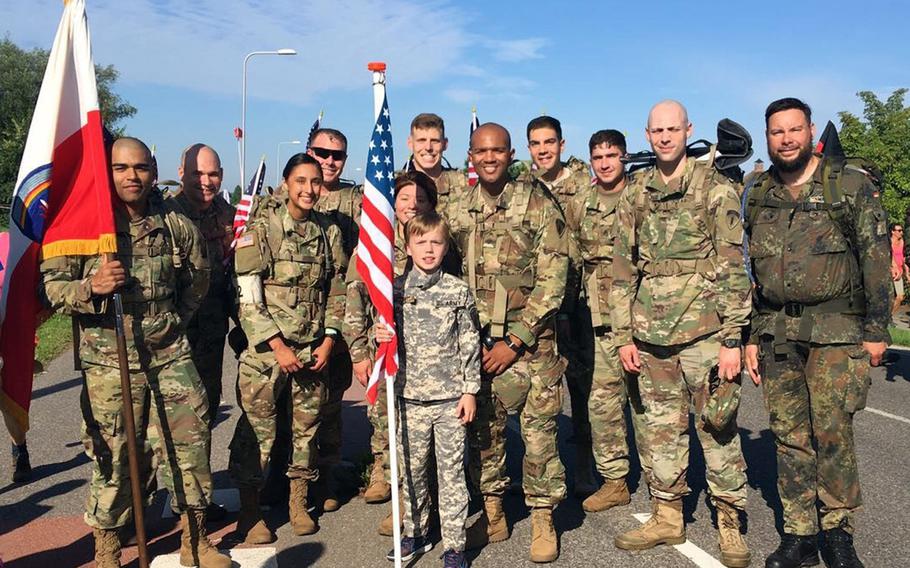 Stan Buurman, center, a ten-year-old Dutch boy, poses with U.S. and German soldiers from U.S. Army Europe along the Four Days of Nijmegen march route near Elst, the Netherlands, Tuesday, July 18, 2017. Buurman is an avid fan of history and the military, and has had a U.S. uniform since he was seven. (Courtesy of Wendy Buurman)

WIESBADEN, Germany — A young Dutch boy, wearing his personalized U.S. Army uniform, got quite the thrill as he met a group of U.S. Army soldiers participating in Europe’s largest international road march, which is set to end Friday.

Stan Buurman, 10, was watching the Vierdagse, or Four Days of Nijmegen, on Tuesday with his aunt in the town of Elst, through which Nijmegen’s nearly 50,000 marchers passed on the first of the four days. Seeing him in his Army Combat Uniform, or ACU, was a pleasant surprise for the USAREUR marchers.

“I think he was the most excited kid to see us today. It was good to see him, get a couple pictures and spread a little joy.” said 1st Lt. Justin Gray, a fire support officer from the South Carolina National Guard assigned to U.S. Army Europe.

Stan said he was able to acquire patches and unit insignia to go along with his uniform. Interested in history, he said he’s always looked up to soldiers.

“(In) World War I and II, and what the Americans did then, they did much for the world,” he said. It was “very, very exciting” to see the 11 soldiers from USAREUR. “They gave me badges, flags,” he said.

It was a welcome respite from the 25-mile march.

“This is marching for 11 1/2 hours a day, and we have more days of this, so it’s mentally strenuous, and it’s definitely a physical challenge,” Gray said. “I think that challenge is awesome. A lot of us were coming into it thinking we’d just walk for a while and get a ribbon, but completing it and being a part of this ... There are thousands of other soldiers here, it’s much bigger scale than I imagined.”

Some 5,000 military personnel from across Europe and North America are participating in this year’s march. While the more than 40,000 civilian marchers can carry little or no weight and wear comfortable shoes, military marchers are required to be in uniform with and combat boots and to carry a rucksack of no less than 10 kilograms, or 22 pounds, for the duration.

Looking to get his share of that camaraderie, Stan and his aunt Wendy woke early on Tuesday to get a good spot along the road between Nijmegen and Elst, arriving about 6:30 a.m. Four hours later, he was able to meet and speak with Gray and his fellow marchers.

“He had a smile from ear to ear the whole day,” Wendy Buurman said.