A nervous night, then a brutal battle in unrelenting summer heat 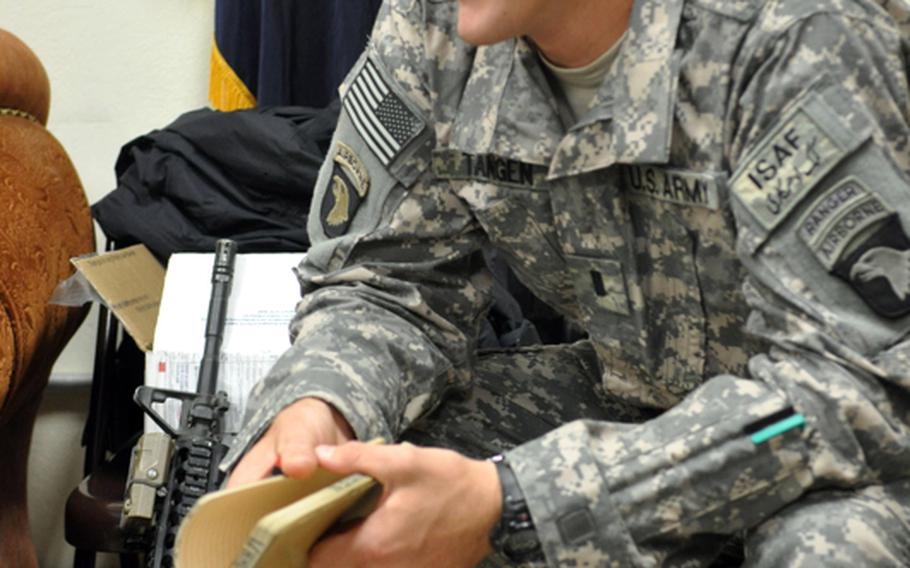 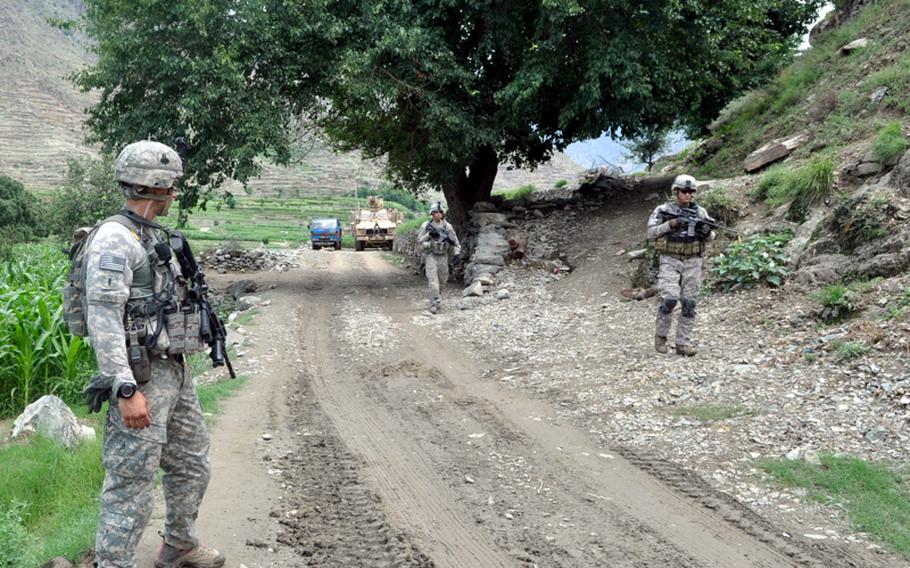 Buy Photo
First Lt. Doug Jones, left, stands on Aug. 9 near the tree that marked the start of a huge battle to rout insurgents from Ghaki Valley in Kunar province on June 27. (Dianna Cahn/Stars and Stripes) 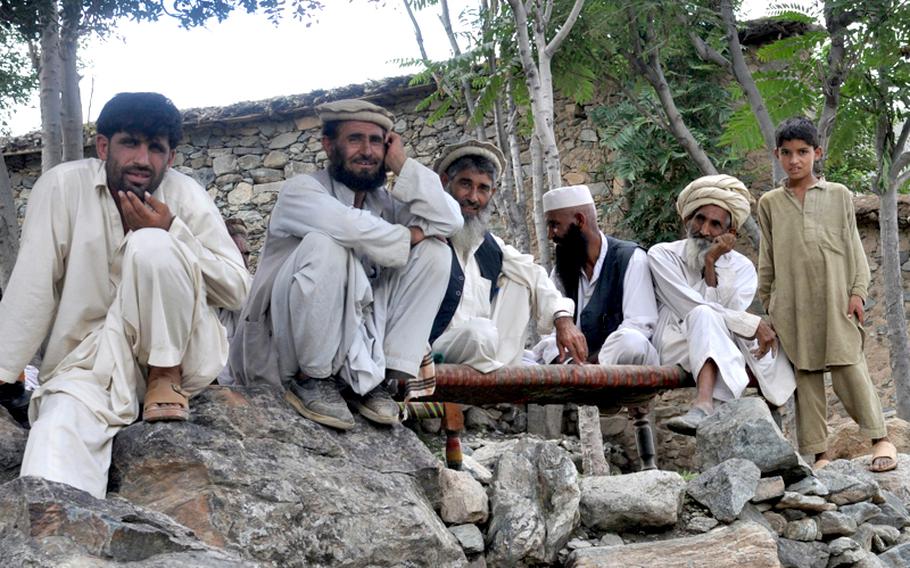 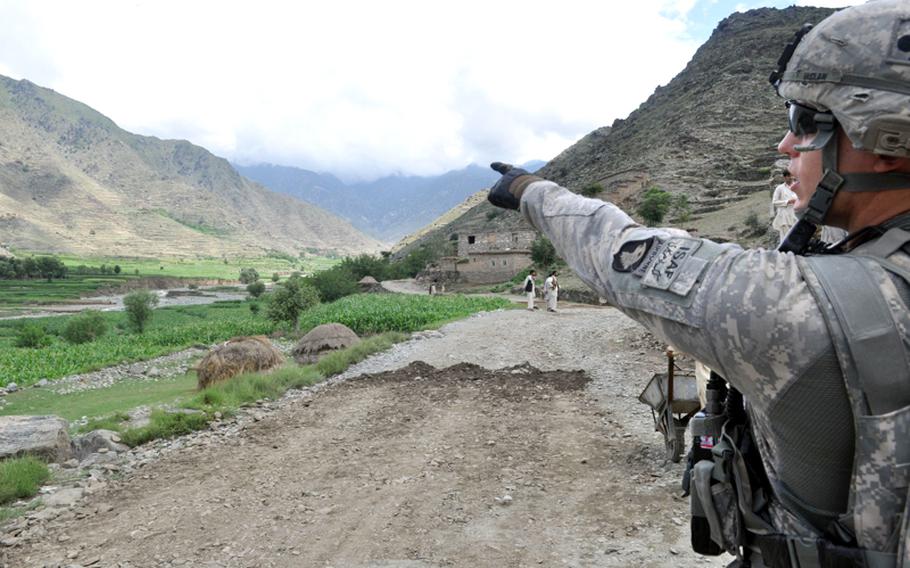 Buy Photo
Sgt. Cole McClain stands outside Sangam on Aug. 9 and points to the area on Ghaki Valley Road where he and his platoon mates were nearly killed by a friendly bomb during an offensive in Kunar province on June 27. (Dianna Cahn/Stars and Stripes) 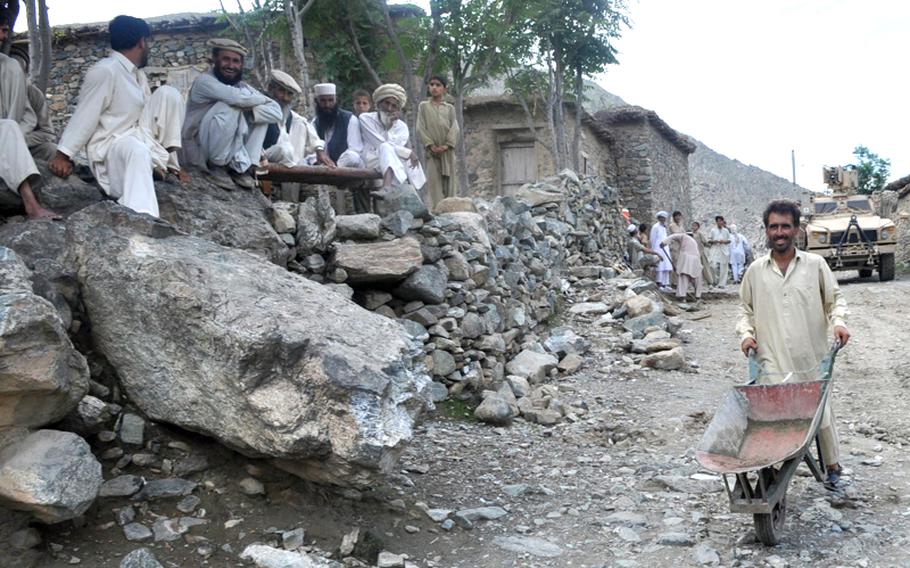 (Day one of a three-day serial)

SANGAM, Afghanistan &mdash; The Afghan soldiers reached the tree first, rounding the bend of the bouldered valley road shortly after 7 a.m., the Americans bringing up the rear.

The heat was already settling in and Sangam villagers, seeing the long arm of warfare snake toward them, began a hasty exodus into the mountains north and south.

As 1st Lt. Stephen Tangen and 15 men from his Headquarters Company, 1st Platoon neared the back of the tree, gunfire and rocket-propelled grenades exploded across the valley floor like a meteor shower tearing through the advancing forces.

One Afghan soldier fell dead. Another was shot in the stomach, a third in the head. In all, five Afghan soldiers took bullets or shrapnel. One of Tangen&rsquo;s men, machine gunner Pfc. Stephen Palu, was shot in his arm and in his leg. Men recalled bullets flying by their heads.

&ldquo;At least we had a little bit of cover,&rdquo; said Spc. Adam Schwichtenberg, 20, of Morristown, Minn., who was a squad point man. &ldquo;The ANA (Afghan National Army) were pinned down at the tree.&rdquo;

For many of the men in the 2nd Battalion, 327 Infantry Regiment, 101st Airborne Division, the opening volleys of Operation Strong Eagle on June 27 marked their first foray into battle &mdash; a combat baptism meted out by an entrenched enemy.

The battle would last far longer than anyone imagined, ranking as the longest and largest fight that this battalion could recall since Vietnam. It would turn young soldiers into warriors, cost men their lives and leave a newborn girl without a father.

And the fight would lay bare every major challenge that U.S. troops face in the ninth year of America&rsquo;s longest war: a committed enemy, a terrified local populace and wavering Afghan security forces still unable or unwilling to defend their own nation.

Insurgents had been massing for months in the mountainous maze of Marawara district&rsquo;s Ghaki Valley in eastern Kunar province. By June, they occupied nearby villages and were closing in on government centers in Marawara and the nearby provincial capital, Asadabad. Lt. Col. J.B. Vowell, whose battalion took over the Kunar River valley in late May, knew that Marawara was his first priority.

&ldquo;It was staring everybody in the face,&rdquo; Vowell said.

Meetings with frightened village elders, intimidated by the insurgents in their midst, proved fruitless.

&ldquo;We are Taliban,&rdquo; one elder from Chinar village told Vowell. &ldquo;The Taliban is our government. Do not expect us to cooperate with you.&rdquo;

Vowell saw the villagers as hostages, held by Taliban forces who focused their efforts on Kunar after the U.S. began its surge in the southern provinces. In addition, Pakistan&rsquo;s military was now denying the Taliban havens they&rsquo;d long enjoyed across the border. Suddenly, this region of Afghanistan, devoid of any functioning government, became the ideal sanctuary for a Taliban surge, Vowell said.

The plan was to take Daridam. This would block the insurgent advance and target the top commander, Qari Zia ur Rahman, who was holed up in Chinar, the next village over. At a minimum, it would give the Afghan government a foothold in the valley.

Much hinged on the unreliable Afghan forces. They would be in the lead to clear Daridam. They would march up the road first, knock down doors first, clear the homes first. And they would be the ones to ultimately hold onto the village once it was cleared.

Vowell knew they were the weak link. He didn&rsquo;t dare tell them about the operation until shortly before, fearing a leak would cost him the element of surprise needed for his men to seize the high ground.

The night before they pushed off, Tangen, a 24-year-old from Naperville, Illinois., offered his men a circle of prayer, said Sgt. 1st Class Gabriel Monreal, the platoon sergeant who, at 32, had seen combat. Squad leaders told the men it was normal to be scared.

&ldquo;It means you have something to lose,&rdquo; Monreal, of Corpus Christi, Texas, recalled one saying. &ldquo;But once the rounds start flying, your bodies will react naturally and your training will kick in.&rdquo;

Early on the morning of June 27, under the cover of darkness, units arrived by helicopter on three peaks surrounding the road, seizing the terrain advantage from the insurgents, though the Taliban still held the key ridge line along the Ghaki Valley road.

Headquarters Company Capt. Steven Weber, 32, of Winthrop, Minn., and his men staged at the Marawara District Center at the entrance to the Ghaki Valley. Tangen&rsquo;s platoon, along with 60 Afghan soldiers, led Weber&rsquo;s armored vehicles up the valley road on foot, while 2nd Platoon, teamed with Afghan Border Police, walked the ridge line to the north.

The men knew the tree outside Sangam could mark the start of the fight. The Taliban were dug in at Daridam and had fortified positions overlooking the road. The voracity of the insurgent assault surprised the Americans. The initial wave didn&rsquo;t let up for more than two hours. The lead route-clearance vehicles fired so many rounds that they required a resupply in the first hours of combat.

Fire came at them from three different ridges. When Palu was shot, two sergeants leaped into action, ignoring the stream of bullets to bandage him and pull him out of danger.

With the vehicles offering protection, the men pushed forward. But the fire was overwhelming. Staff Sgt. Eric Shaw, one of Tangen&rsquo;s squad leaders, ran up to alert the Afghan soldiers that they were stopping and to find cover.

Shaw, originally of Exeter, Maine, was a father of three girls, the youngest a newborn whose birth kept her 31-year-old dad back home when his battalion deployed in late May. But he was eager to join his men and arrived in Kunar a week before Operation Strong Eagle.

As Shaw maneuvered back behind the truck where Tangen was standing, a bullet found its way under his helmet, shattering his face.

For the first time in his command, Tangen watched one of his men die.

Tangen&rsquo;s distraught call went over the radio. &ldquo;We have a KIA!&rdquo; he shouted. &ldquo;Shaw is dead! We need to evacuate his body!&rdquo;

For Tangen it was a moment of deep reckoning. Shaw had been his mentor during training at Fort Campbell, Ky., a sergeant with the experience that Tangen was training for. They were friends, brothers, and teacher and student. Now he put aside his own shock and grief to lead a group of shocked and grieving men in battle, gripped by the knowledge that it could have been any one of them.

It was a loss many of the men would deal with only later. Shaw was a devoted leader who adored his family but saw his squad as family, too. He&rsquo;d rushed to join his men in Afghanistan, but he would lie in bed each night staring at a picture of his daughters, Tangen said.

Tangen, who&rsquo;d never seen battle before this day, returned his attention to the fight. In a matter of minutes, he&rsquo;d become a combat veteran and a leader who would take his men through the fiercest fight and the hardest day they might ever know.

By midday, the men on the ridges were mired in their own fights.

The early summer heat in this mountain valley was well over 100 degrees and the sun was unrelenting. After five hours of battle, the men had gone through all their water. Soldiers were fainting and vomiting. But there was no time to refit. Medics in the field were pumping men full of IV fluids and sending them back into battle.

&ldquo;It was a knockdown, drag-out, brutal fight, and it was close,&rdquo; Vowell said. &ldquo;It lasted a long time.&rdquo;

Second Platoon, led by 1st Lt. Doug Jones, was fighting hard on the ridge line, while on a peak behind them, Company A was in face-to-face combat to regain the high ground.

Across the valley, on a peak to the south, a platoon of scouts was fighting insurgents on all sides. Company B was southwest of them, in a fight similar to Company A&rsquo;s, battling insurgents trying to attack from the rear.

On the road, air support helped suppress the insurgent fire, allowing the men to evacuate their wounded. Sgt. Joseph Moore, a 22-year-old from Pittsburgh, escorted the body of his close friend Shaw to the helicopter landing zone at the Marawara District Center, where Shaw would begin his journey home.

Weber, hoping to ease the pressure on the scouts, pushed his element forward.

But the Afghan army soldiers, alarmed by the withering fire and their casualties, had had enough. As the wounded were evacuated, the rest of the Afghan soldiers retreated with them. They were done.

The Americans were left to fight alone.

Upcoming:Day 2: The air in the truck was so hot, the men could barely breathe. Around them, RPGs landed in a hail of explosions. They were sitting ducks.Day 3: On a ridge across from Daridam, the scouts were taking fire from as many as nine positions. Suddenly, their leader was down.