A day by many names, celebrated all the same 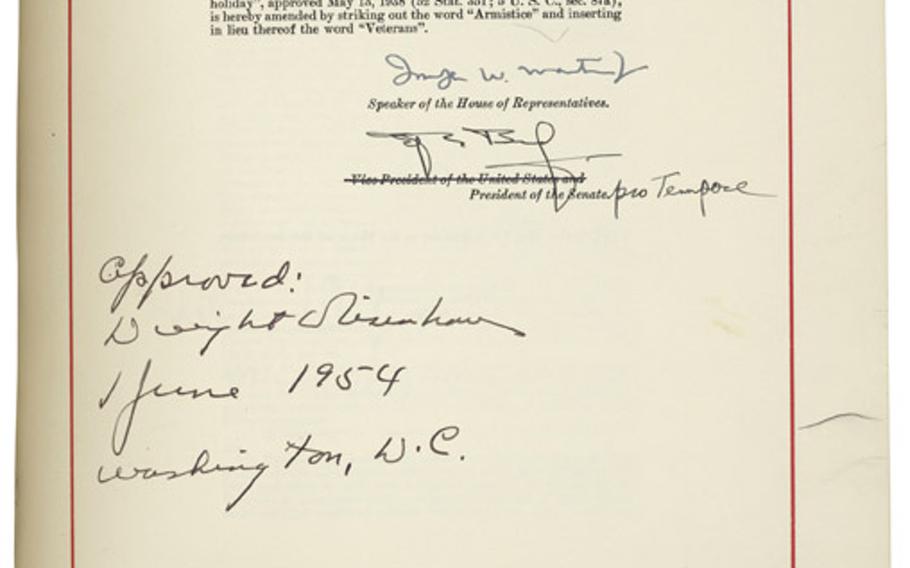 AVIANO, Italy — It’s a day celebrated by many throughout the world. It doesn’t have the same name in most countries, but the reason for this “holiday” is the same: to honor military veterans.

On the 11th hour of the 11th month in 1918, a ceasefire agreement was signed by the Allied powers with Germany, ending the fighting of World War I. The war would not officially be declared over until June 28, 1919, with the signing of the Treaty of Versailles, but most consider Nov. 11, 1918 the day that ended “the war to end all wars,” according to the U.S. Department of Veterans Affairs website.

Britain, France, Australia and Canada also commemorate the veterans of World Wars I and II on or near November 11th, according to the History Channel. Canada has Remembrance Day, while Britain has Remembrance Sunday (the second Sunday of November). In Europe, it is common to observe two minutes of silence at 11 a.m. every November 11.

After 19 months of fighting between the United States and Germany, President Woodrow Wilson would announce a new national holiday in the U.S. “To us in America, the reflections of Armistice Day will be filled with solemn pride in the heroism of those who died in the country’s service and with gratitude for the victory, both because of the thing from which it has freed us and because of the opportunity it has given America to show her sympathy with peace and justice in the councils of the nations …” according to the VA site.

In a June 6, 1919, edition of Stars and Stripes, a staff writer captured the speech given by President Wilson at Mount Valerien, just west of Paris.

“These men did not come across the sea merely to defeat Germany and her associated powers in the war,” Wilson said. “They came to defeat forever the things for which they meant to establish; and they came, moreover, to see to it that there should never be a war like this again.

“So it is our duty to take and maintain the safeguards which will see to it that the mothers of America and the mothers of France and England and Italy and Belgium and all the other suffering nations shall never be called upon for this sacrifice again. This can be done. It must be done. And it will be done.”

But it wasn’t until June 4, 1926, that the end of World War I was recognized by the U.S. Congress. And on that day, Congress called upon officials to display the American flag on all government building and invited the American public to observe the day in schools, churches and other suitable places.

Amristice Day — which became a legal federal holiday on May 13, 1938 — is a day to break free from our daily routine, to pause for a few moments of silence and to recognize the many service members who fought during World War I, according to the VA site.

Two more wars would pass before the Act of 1938 would be amended by President Dwight D. Eisenhower, striking out the word “Armistice” and replacing it with “Veterans,” according to an Oct. 12, 1954, Federal Register.

In 1968, the Uniform Holiday Bill allowed the government to observe federal holidays on Mondays, ensuring three-day weekends for federal employees for Washington’s birthday, Memorial Day, Columbus Day and Veterans Day. It was thought that these extended weekends would encourage travel, recreational and cultural activities and stimulate greater industrial and commercial production, according to the VA site.

The first Veterans Day under the new law was observed with much confusion on October 25, 1971.

But many states did not agree with this decision and continued to celebrate the holidays on their original dates.

It became apparent that the commemoration of Veterans Day was a matter of significance to a great number of our citizens, according to the VA site, and so on September 20th, 1975, President Gerald R. Ford signed Public Law 94-97 (89 Stat. 479), which returned the annual observance of Veterans Day to its original date of Nov. 11, beginning in 1978.

Veterans Day continues to be observed on Nov. 11, regardless of what day of the week on which it falls.