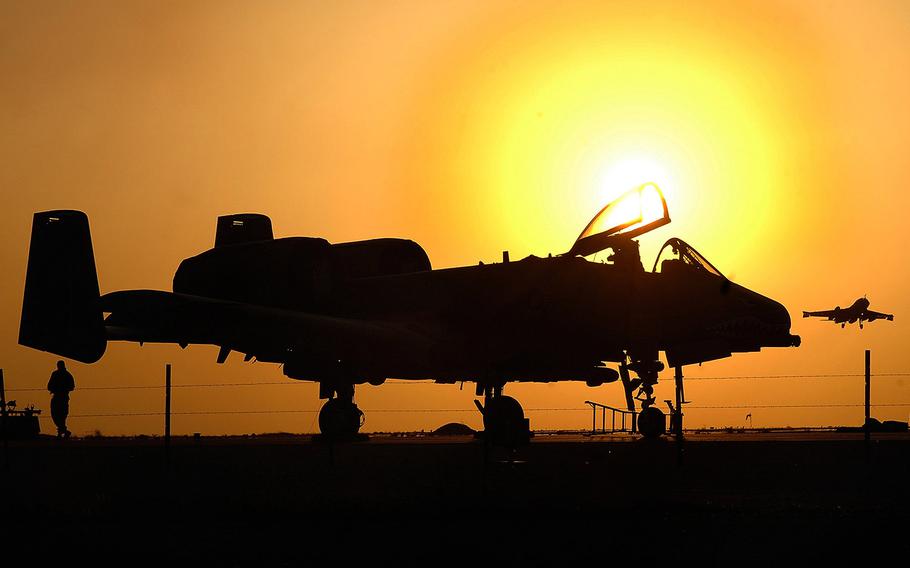 WASHINGTON — Efforts to keep the A-10 Thunderbolt flying passed a key hurdle Thursday when a House military oversight committee voted to bar its retirement.

An amendment by Arizona Republican and former A-10 pilot Martha McSally blocking any moves by the Air Force was approved by the Armed Services Committee and is now part of an annual defense bill headed to the chamber floor in the coming weeks.

The Capitol Hill battle over the A-10 is likely to stretch through this year and will soon move to the Senate as lawmakers again weigh a controversial plan by the Air Force to retire the close-air-support stalwart and save about $4.2 billion by 2019. Troops and many in Congress — including Senate Armed Services chairman John McCain, R-Ariz. — have decried the plan, saying it will endanger infantry troops.

“Not only does [the amendment] prohibit the retirement of any A-10s, it prevents any additional back-door attempts at mothballing these aircraft, such as placing them in backup status,” said McSally, whose district includes Davis-Monthan Air Force Base, home to most of the Warthog fleet.

The amendment is included in the current version of the National Defense Authorization Act, a key budget document that sets the military agenda and gives a blueprint for annual funding.

The bill was passed in the predawn hours Thursday after over 18 hours of debate. It covers a wide range of military issues this year and includes a historic overhaul of the retirement system offered to troops, modifying the 20-year cliff pensions into a 401(k)-style system available to all servicemembers throughout their careers.

Rep. Mac Thornberry, R-Texas, chairman of House Armed Services, had written significant protections for the aircraft into the NDAA bill, including full program funding and a reduced cap on how many A-10s can be moved into backup status, but on Monday he also requested amendments such as McSally’s that would go further.

He said he plans to bring the bill to the House floor soon, though no date for a vote had been set.

After a heated political battle last year, Congress struck a compromise on the defense budget that allowed the Air Force to reduce flying time and maintenance on A-10s, despite strong opposition from Thornberry’s predecessor on the Armed Services Committee.

But the House insistence that the Warthog be spared the budget ax was overcome during Senate negotiations headed by Carl Levin, a retired Michigan Democrat and then-chairman of that chamber’s Armed Services Committee, who backed the military’s plans.

Now, the Air Force says it wants to sideline 18 of the aircraft at Hill Air Force Base in Utah — half of the 36 allowed under last year’s defense budget — but A-10 supporters in the Senate said the move amounted to a back-door retirement.

The service recently warned the armed services committees in the House and Senate that blocking the A-10 retirement at Hill Air Force Base will mean sending the F-16s there to the boneyard in Arizona and could delay the rollout of the high-tech F-35 joint strike fighter, which is slated to arrive there later this year.