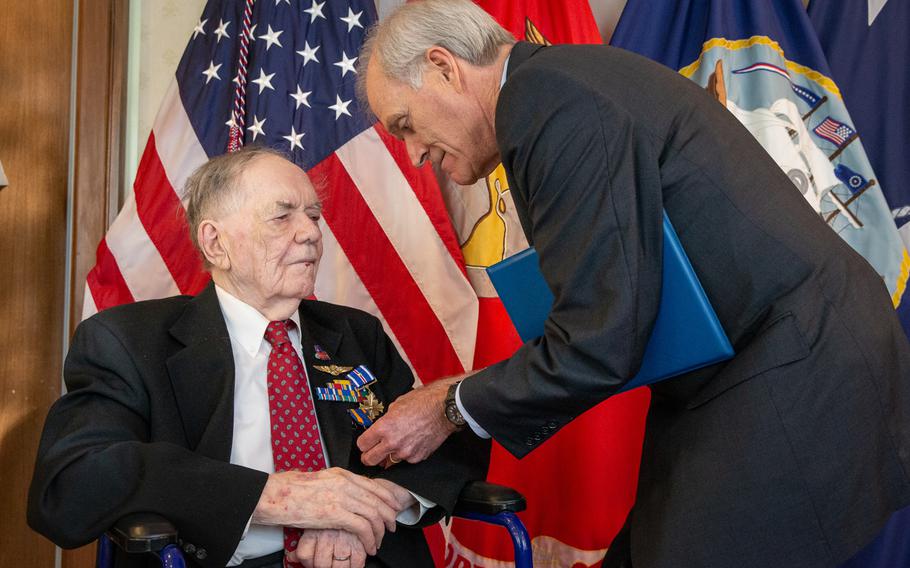 Secretary of the Navy Richard V. Spencer, right, awards retired aviation machinist mate 1st class Bernard B. Bartusiak, 95, with two Distinguished Flying Cross medals and the Air Medal, at a ceremony at the Pentagon on Tuesday, Sept. 10, 2019. Bartusiak earned the awards for dozens of missions he flew as part of a bomber crew during World War II, but "for reasons unknown," never received them until three-quarters of a century later. (Paul L. Archer/U.S. Navy)

A 95-year-old Navy veteran was presented with several combat decorations at a Pentagon ceremony this week for missions he flew as part of a bomber crew during World War II.

Bernard Bartusiak of Chicago earned more than one Distinguished Flying Cross and several Air Medals during the war, but, “for reasons unknown,” didn’t receive them, said Lt. Samuel Boyle, a Navy spokesman.

But on Tuesday, Navy Secretary Richard V. Spencer put that right when he awarded Bartusiak the medals he had earned on dozens of missions in European skies between April 1943 and August 1944 – many before he turned 20.

Bartusiak sat in a wheelchair as Spencer pinned the medals to his lapel, next to the veteran’s other ribbons and aircrew wings.

“This honor may be overdue, but I am humbled by the opportunity to present it,” Spencer told the audience, which included Bartusiak’s two daughters and his congressman, U.S. Rep. Dan Lipinski, D-Ill.

Born in 1924, Bartusiak joined the Navy in May 1941 at age 17 and served as a petty officer first class aviation machinist’s mate on the aircrew of a PB4Y Consolidated Liberator patrol bomber in the European theater.

Also known as the B-24, the Liberator was used by the Navy for anti-submarine warfare against German U-boats in the Bay of Biscay and the English Channel, the Naval History and Heritage Museum says on its website.

After the war, Bartusiak became a corporate accountant and raised a family with his wife of 65 years, Dolores. In 2018, with help from Lipinski’s office, the WWII veteran submitted documentation substantiating the sorties he’d flown some three-quarters of a century earlier, Boyle said.

On the basis of that evidence, Spencer awarded Bartusiak a Distinguished Flying Cross for 20 combat missions he completed between April 20 and April 30, 1943, and a gold star in lieu of a second award for another 20 missions from May 1943 to August 1944.

Spencer also awarded him seven strike/flight awards of the Air Medal for maintaining “superior professionalism, perseverance, and devotion to duty in the face of hazardous flying conditions” on 45 combat missions during the war, according to an award citation provided by the Navy.

In return for Lipinski’s assistance, Bartusiak named him an honorary member of his crew and gave him a set of framed aircrew wings, which the congressman posted a photo of, along with a thank you card from the veteran, on social media.

“Receiving these medals has made the climax to my career,” Bartusiak said in the handwritten card. “Thank you for helping me complete this final mission.”