7 US troops killed in separate attacks in Afghanistan 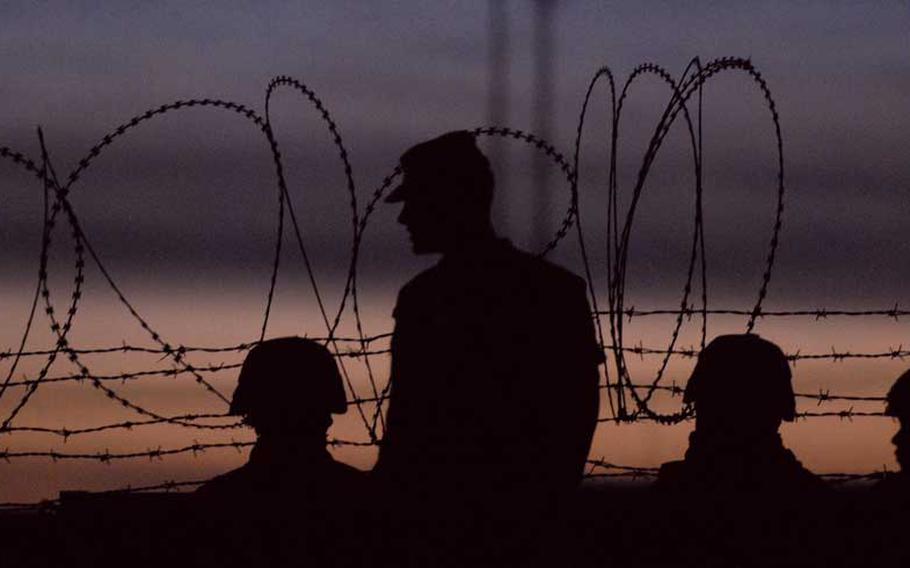 A group of soldiers are silhouetted against the evening sky, Saturday, Jan. 15, 2011, in Kandahar, Afghanistan. (Haraz Ghanbari/U.S. Navy)

KABUL – Eight coalition troops, including at least seven Americans, and one Afghan interpreter were killed in separate attacks across Afghanistan, reflecting a rising death toll in the country.

Five Americans and an Afghan interpreter were killed Saturday when their vehicle hit a roadside bomb in Afghanistan's Kandahar province, according to the NATO-led International Security Assistance Force (ISAF) and local officials.

David Lakin, a spokesman for the U.S. military in Afghanistan, confirmed the U.S. deaths in the bombing.

Two more ISAF troops were killed Saturday in a so-called insider attack in western Afghanistan, according to a coalition news release. The two victims were Americans who died after an Afghan National Army soldier fired on coalition troops, an ISAF statement reads. Another coalition servicemember was killed in northern Afghanistan, though ISAF did not immediately say where the attack took place or which country the servicemember is from.

Insider attacks, where Afghan troops turn their weapons on their international counterparts, have been an increasing problem over the last year and accounted for about 15 percent of coalition deaths in 2012.

The bombing, which occurred in Maiwand district, according to a statement from the Kandahar provincial government, comes just four days after three British troops were killed by a bomb in Helmand province.

While the U.S. and its allies have been ramping up the armor on military vehicles over the years, better protecting troops from bombs, insurgents have been trying to keep pace by making bigger, deadlier bombs. The bombs, or improvised explosive devices --- often plastic jugs filled with fertilizer --- have been the biggest killer of international troops in Afghanistan since the U.S. invaded the country in 2001.

The massive blast that killed the British troops also killed nine Afghans and injured six more British troops. The deaths were met with shock in Britain because the troops were traveling in a 15-ton Mastiff troop carrier, one of the most heavily armored vehicles in the British fleet. It was the first time British troops in Afghanistan were killed in a Mastiff.

Helmand and Kandahar provinces are considered the cradle of the Taliban and have been by far the deadliest provinces for coalition troops over the course of the war.

While coalition deaths are down significantly from the same time period last year, they have been rising steadily with the traditional start to Afghanistan’s fighting season. Saturday’s blast brings the total number of international troops killed since the beginning of April to 23, and 50 for the year.

An additional seven civilians were also killed when a Boeing 747-400 hauling cargo in support of the NATO mission in Afghanistan crashed Monday at Bagram Airfield, one of the main military logistics hubs for the country.