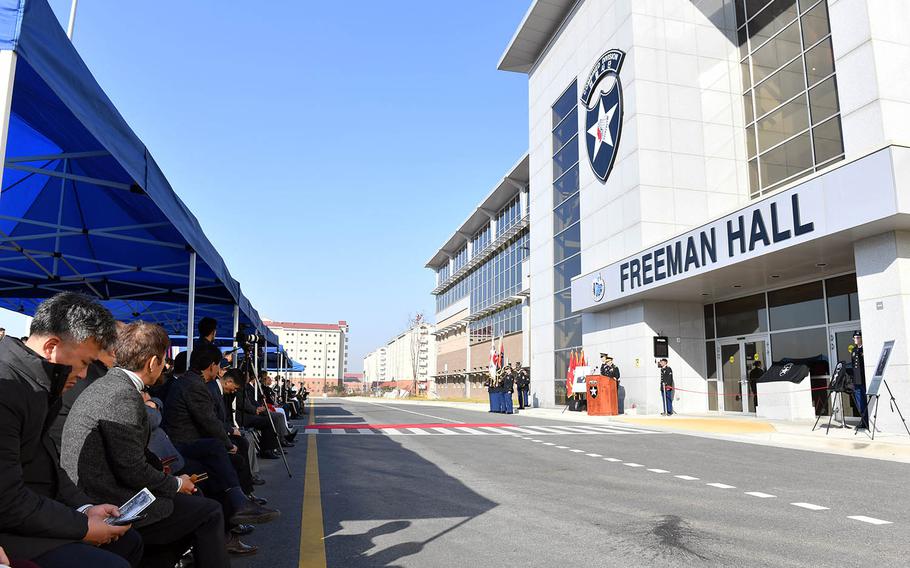 The ceremony took place at the entrance of the new Freeman Hall, which retains the name of the previous headquarters on Camp Red Cloud in Uijeongbu.

The Indianhead Division has been stationed near the front lines with North Korea since the 1950-53 Korean War, which ended in an armistice instead of a peace treaty.

Commander Maj. Gen. Scott McKean vowed to maintain readiness from the new base in Pyeongtaek, some 40 miles south of Seoul.

“We bid farewell to Uijeongbu and Camp Red Cloud, where so much of our story was written,” he said.

“As we begin our newest chapter here let there be no doubt we will continue to be steadfast and ready in our responsibilities to defend the Republic of Korea,” he added, using the formal name for South Korea.

The 2nd ID command moved to Camp Humphreys earlier this year, following U.S. Forces Korea and the Eighth Army as a long-delayed agreement to relocate most U.S. forces south was implemented.

Some 28,500 U.S. servicemembers are stationed in South Korea.