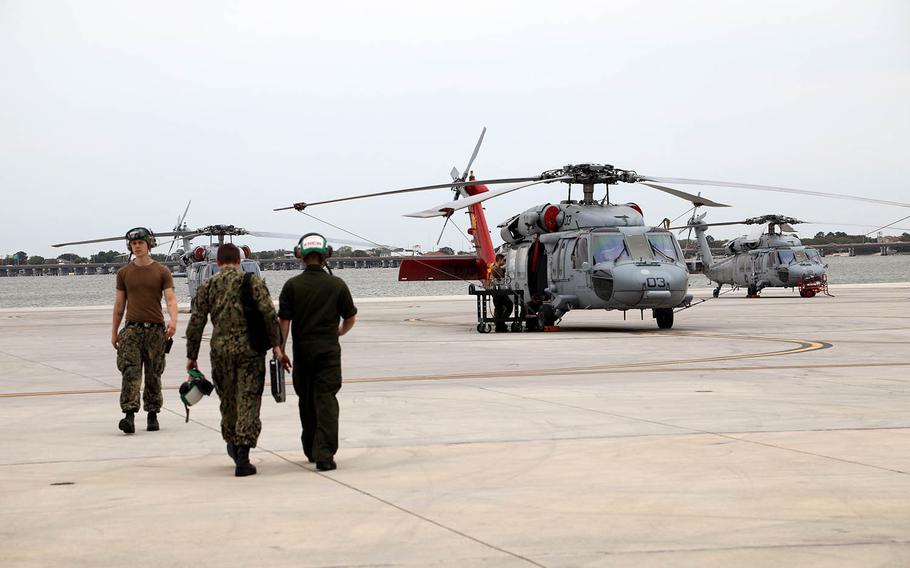 Sailors walk on the flight line near MH-60S Knighthawk helicopters with the Helicopter Sea Combat Squadron two, the "Fleet Angels," at Naval Station Norfolk in Virginia on April 26, 2019. (CAITLIN M. KENNEY/STARS AND STRIPES)

Sailors walk on the flight line near MH-60S Knighthawk helicopters with the Helicopter Sea Combat Squadron two, the "Fleet Angels," at Naval Station Norfolk in Virginia on April 26, 2019. (CAITLIN M. KENNEY/STARS AND STRIPES) NAVAL STATION NORFOLK, Va. — Lurking beneath the surface of the Atlantic Ocean is a threat that has not been the focus for national security strategists in the United States since the end of the Cold War: Russian submarines.

The vessels are quiet, hard to detect, and an asset in which the Russian military has continued to invest. During the last several years, Russia has sent submarines farther into the North Atlantic and Mediterranean and Black seas. They are a growing concern for the United States as Russia attempts to stretch its power and influence around the world.

The U.S. Navy’s answer to the increased maritime competition with Russia is the re-establishment of its 2nd Fleet, which declared initial operational capability this week, meaning it can start commanding and controlling forces in the Atlantic Ocean.

The U.S. military has pivoted in the last two years from focusing on a counterterrorism to what the Pentagon calls “great-power competition” with several nations. The biggest challengers to the United States are the Russians and Chinese. With Russia’s increasingly aggressive posturing, the feeling in the U.S. military has been to meet this new challenge with a mindset similar to its Cold War stance when the two nations went head to head around the world.

2nd Fleet’s return marks the Atlantic Ocean as an operational area, instead of just an area of transit for ships.

“That is, that there may be real world, peace time and war time operations going on there. And that tracks to the revival of Russian military activity in the Atlantic,” said Mark Cancian, a senior adviser with the Washington think tank Center for Strategic and International Studies. “You know they’re sending submarines out again. You can see that they are reasserting military power again. So the Navy felt that it needed to recreate this fleet in order to be able to respond operationally.”

Vice Adm. Andrew Lewis, the 2nd Fleet commander, told an audience at a CSIS event in November that “the Russian undersea threat is real and they are very competent and very operationally capable,” adding a U.S. submarine group had also been re-established on the East Coast and he is working in coordination with the commander on the anti-submarine warfare mission.

The Fall and Rise of 2nd Fleet

Why 2nd Fleet was shut down in 2011 and then had to be brought back seven years later is a story very familiar to the military: downsizing and changing priorities.

Former President Barack Obama’s administration was pivoting to the Pacific Ocean as it was pulling forces out of Europe, and drawing down forces in the wars in Iraq and Afghanistan, Cancian said.

“Well if you’re going to do that, then of course the Atlantic becomes much less important,” he said.

That drop in importance also affected its standing when former Defense Secretary Robert Gates wanted to cut Pentagon overhead costs, so the military looked to reduce its number of headquarters, according to Cancian. The Atlantic was a major focus of anti-submarine warfare during the Cold War, but that threat had been diminishing, so 2nd Fleet was disbanded, with its personnel, responsibilities, and assets moved under U.S. Fleet Forces, according to a Navy release at the time.

But in early 2014, Russia invaded Crimea and started a war in eastern Ukraine. Europe once again became an area of heightened concern for the United States and its NATO allies, as Russia looked to re-assert itself in Eastern Europe.

“So the thinking in the Obama administration about Russia changes at that point. Previously Russia had been seen as you know sort of partly adversary, partly partner, depending on the issue,” Cancian said. “And after 2014 it was clear that the Russians were going to be very aggressive and they were not going to be partners.”

More so, by 2018, the counterterrorism strategy of the past 15 years was surpassed by the growing concern for Russian resurgence as well as China’s desires to unseat the United States as the preeminent power in the Indo-Pacific. The Pentagon under President Donald Trump’s administration, then led by former Defense Secretary Jim Mattis, drew up the National Defense Strategy that put Russia and China front and center of the military’s renewed focus on great-power competition.

Last August, the Navy held a re-establishment ceremony to bring back 2nd Fleet officially to meet the needs of defending the Atlantic Ocean as far north as the Arctic. It was also tasked to develop concepts that test the Navy’s warfighting abilities in various scenarios and conditions.

2nd Fleet is again based at Naval Station Norfolk on the coast of Virginia, considered the largest U.S. naval base. Lewis said during a recent visit by reporters to the Norfolk base that the fleet has been designed to be “lean, agile and expeditionary.” The fleet’s staff of officers and sailors will stay relatively small, currently at about 100, and will likely double as it reaches full operational capability in December, according to Lt. Marycate Walsh, a 2nd Fleet spokeswoman.

“But the ultimate size of the staff will be a number that is fit for its purpose and fit for its time,” she added.

Unlike other fleet commands, 2nd Fleet will not be constrained to a specific geographic area, operating missions in the Atlantic Ocean and up to the Arctic and reporting to either U.S. Naval Forces North or U.S. Naval Forces Europe.

The commands of NAVNORTH and NAVEUR divide the Atlantic Ocean along an imaginary line from the southern tip of Greenland down to about the Caribbean Sea. But 2nd Fleet will be able to conduct a change of operational control, or CHOP, shifting the control of a ship between NAVNORTH and NAVEUR based on mission requirements and not geography, according to the Navy.

NATO and the Arctic

Lewis is also commander of Joint Force Command Norfolk, which is a command in NATO. The partnership between 2nd Fleet and NATO is important to its mission, especially because it will operate alongside these allies in the northern Atlantic.

With 2nd Fleet marking its initial operating capability, the fleet’s command will now travel to the Baltic Sea region to lead the 47th annual Baltic Operations exercise, otherwise known as BALTOPS. The maritime exercise will train participants from 18 nations, strengthening the partnerships through learning how to work together, according to a Navy statement in April.

The BALTOPS exercise, which has been designed to train on responding to a near-peer competitor, will demonstrate 2nd Fleet’s expeditionary capability by relocating “out onto a command ship in the Baltic in order to command and control this exercise,” said Cmdr. Shaun Servaes, the deputy of plans and policy at 2nd Fleet and the lead BALTOPS planner.

2nd Fleet also will focus on the Arctic, an area that is becoming a greater strategic concern as more ice is melting, opening more routes to travel through the region. The Arctic has energy and mineral resources, according to a story by the BBC. And the Russians have increased their presence in the region by establishing military bases and operating a large icebreaker fleet, according to Cancian.

This has raised concerns in the U.S. government with keeping those trade routes open to all but also the need to have an American presence, such as 2nd Fleet, in the Arctic “to maintain freedom of the seas, freedom of navigation within international norms,” Lewis said.

The Arctic is a “very complex situation,” with the ice moving and fisheries, he said.

“We have to be able to deliberately have a capability to operate there. So as really to maintain a peaceful existence of the Arctic, because the Russians are very clear about their intent to use the Arctic and to some degree militarize it,” Lewis said.

Even as the Navy embraces 2nd Fleet’s new position among the other commands, Cancian believes the fleet is going to face a challenge getting ships, including for training and exercises.

“Navy ships are limited and there are a lot of claimants. And there will always be demands to send ships to the Middle East like right now,” he said. “…A lot of demands to send them off to Europe to face the Russians. Of course, then there’s the Pacific with the Chinese. So there are way more demands than the Navy can meet.”

Earlier this month, the USS Abraham Lincoln Carrier Strike Group expedited its transit from the 6th Fleet’s area to the 5th Fleet’s area in the Middle East as the Trump administration pointed to credible threats by Iran and its proxies against Americans and U.S. interests. Iran is mentioned in the 2018 National Defense Strategy as a rogue regime.

2nd Fleet will also have to prove that it’s making an impact where the Navy needs it or else it could find itself on the chopping block again.

“I would emphasize that 2nd Fleet is going to be challenged to make a place [for] itself and it’s going to have to show its value. It was disestablished once, it could be disestablished again,” Cancian said. “So I think that they will feel some pressure to show that they’re adding value.”