Despite nickname, Mount Tanigawa in Gunma prefecture is suitable for all on warmer days Buy Photo
A hut near the summit of Mount Tanigawa in Gunma prefecture, Japan, sells food, drinks and souvenirs. (Seth Robson/Stars and Stripes) 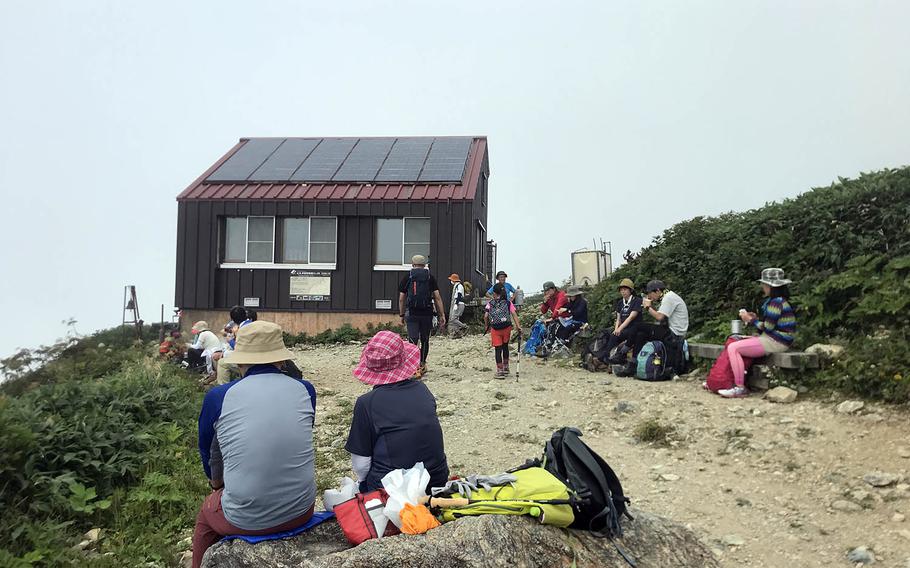 Buy Photo
The climb to the summit of Mount Tanigawa in Gunma prefecture, Japan, should take about 2.5 hours at a moderate pace. (Seth Robson/Stars and Stripes)

Scaling Mount Tanigawa, a 6,486-foot peak bordering Japan’s Gunma and Niigata prefectures, is a risky adventure in winter. More than 800 people have died from exposure, avalanches and falls attempting to climb the “Mountain of Death” since the 1930s, about four times as many as have perished on Mount Everest, according to local news reports.

On warmer days, however, the climb is something that even some children can accomplish in relative safety, although their parents might have to put up with a few tears and complaints about sore feet along the way.

From Yokota Air Base in western Tokyo, the quickest way up to the top of the mountain starts with a drive to Minakami, a resort area about 90 minutes away if there are no traffic snarls. The area has a number of hot springs, some nice-looking cafes and restaurants and quite a few advertisements for outdoor activities such as whitewater rafting, mountain biking and skiing.

Park at the bottom of the Tanigawadake Ropeway. There’s a big indoor garage connected to the gondola that will whisk you up to the Tenjindaira ski area at an altitude of 4,334 feet.

If you don’t feel like climbing the mountain, you can ride a double chair lift for under $8 to the top of the ski area and check out the view, which includes Tanigawa, nearby Mount Naeba and the Yuzawa resort area.

The climb to the summit, which runs to the right after you exit the ropeway, is about 2 ½ miles and should take about 2 ½ hours at a moderate pace.

Remember to put on sunscreen and to take enough to drink. On the day I hiked, the temperature was about 90 degrees in Tokyo but only about 75 degrees on the mountain, and I drank about a half-gallon of water along the way.

I was wearing shorts, a T-shirt, a sunhat and hiking boots, but saw a few hikers wearing sneakers. I also carried a wool base layer and a raincoat in case the weather turned bad.

The path up takes you along a ridgeline that’s covered in trees for about the first mile. After that, the foliage is only about waist high and you can check out stunning mountain scenery that’s on par with what you might find in Austria or Switzerland.

The track ranges from wooden walkways and steps to steep rocky slopes where somebody has installed ropes and chains that you can haul yourself up with.

There are a few large rocky outcrops that are good spots to stop for a rest.

Near the top there’s a small hut and some outdoor toilets. The hut sells food, drinks and souvenirs.

The actual summit is about another five minutes’ climb. On the day I was there it was shrouded in mist, and there were about a dozen other climbers up there taking photos and eating lunch.

The route down is slightly easier than going up, but it takes a decent amount of energy to navigate the steeper slopes.

Back at the ski area, there’s a much larger restaurant selling everything from ramen noodles to ice cream. While you replenish your energy, you can stare out some massive windows at another fantastic mountain view.

DIRECTIONS: Take the Kanetsu Expressway, exit at Minakami and follow the signs to the Tenjindaira ski area.

COSTS: The ropeway costs just under $20 for a round trip.

FOOD: Coffee at the top of the mountain costs under $4, and lunch at the ski area restaurant is about $10.