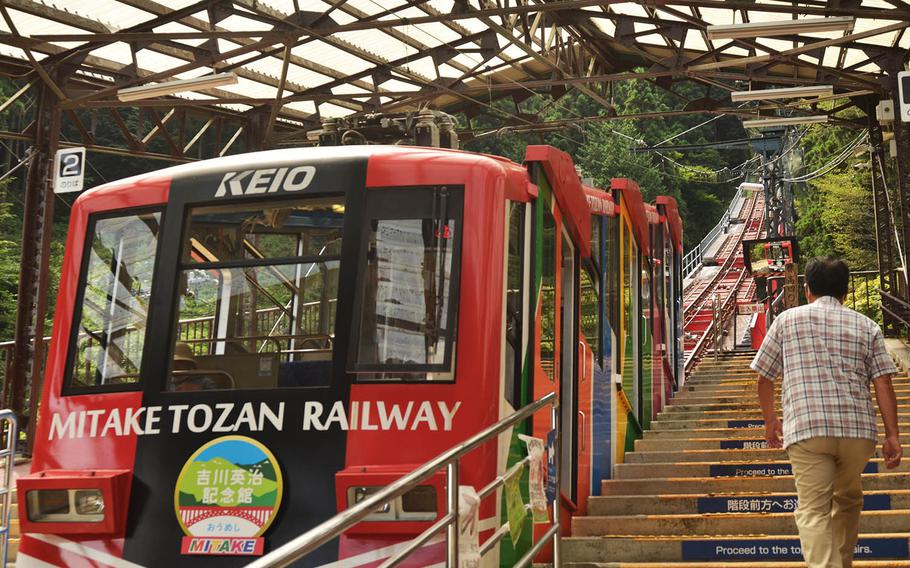 Buy Photo
Visitors to Mount Mitake in Japan can take a six-minute funicular ride to reach the hiking trail. (Erica Earl/Stars and Stripes)

Buy Photo
Visitors to Mount Mitake in Japan can take a six-minute funicular ride to reach the hiking trail. (Erica Earl/Stars and Stripes) 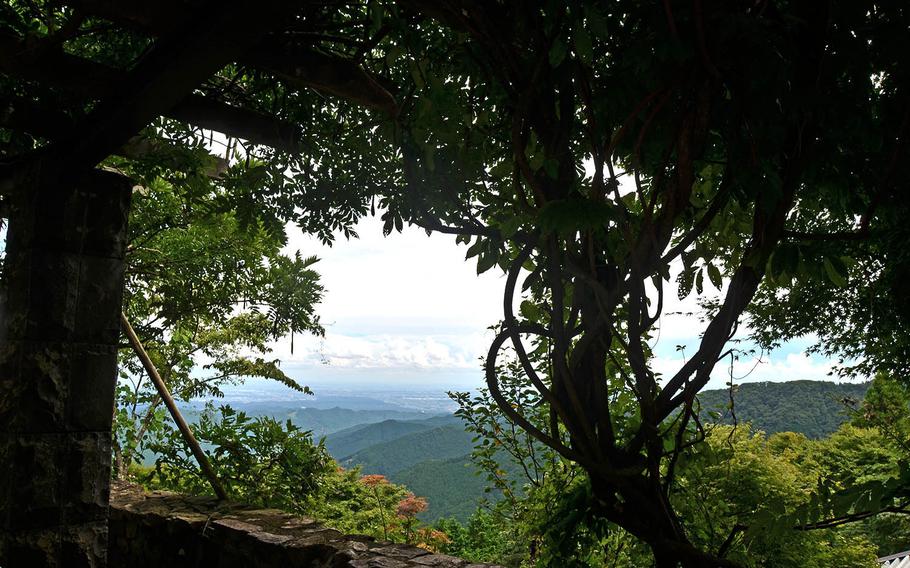 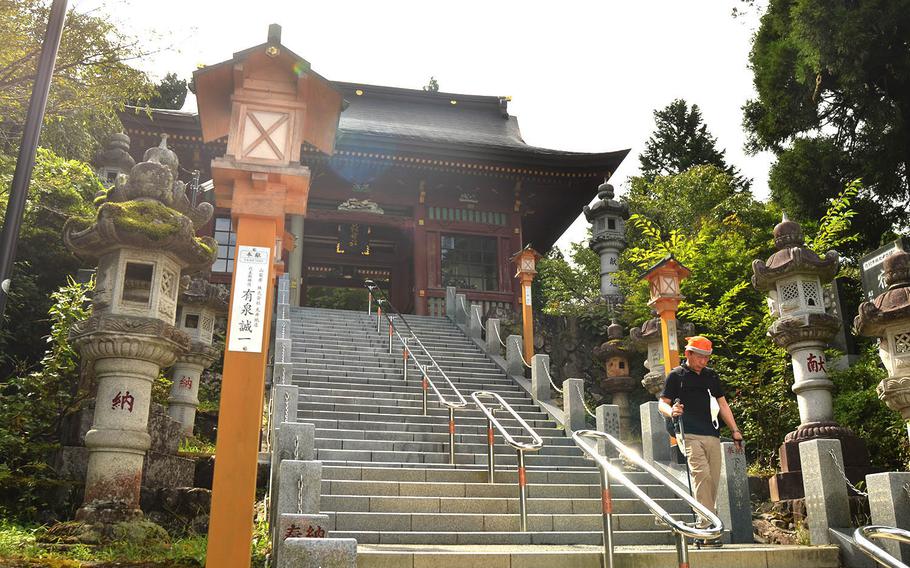 Buy Photo
The shrines on Mount Mitake have been known in Japanese lore as spirtual pilgrimage sites since the Edo period. (Erica Earl/Stars and Stripes) 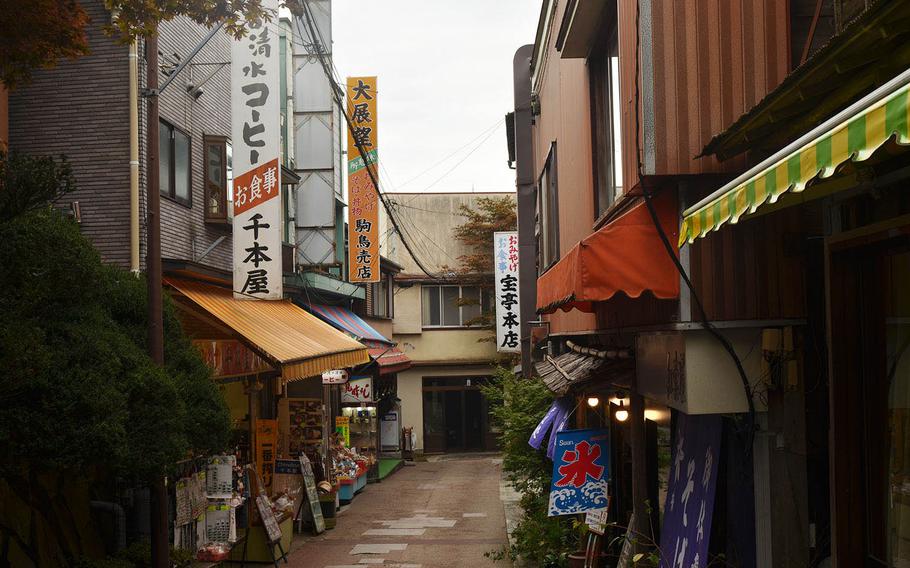 Buy Photo
Visitors can shop and eat at the small village that sits along the journey to the top of Mount Mitake, Japan. (Erica Earl/Stars and Stripes) 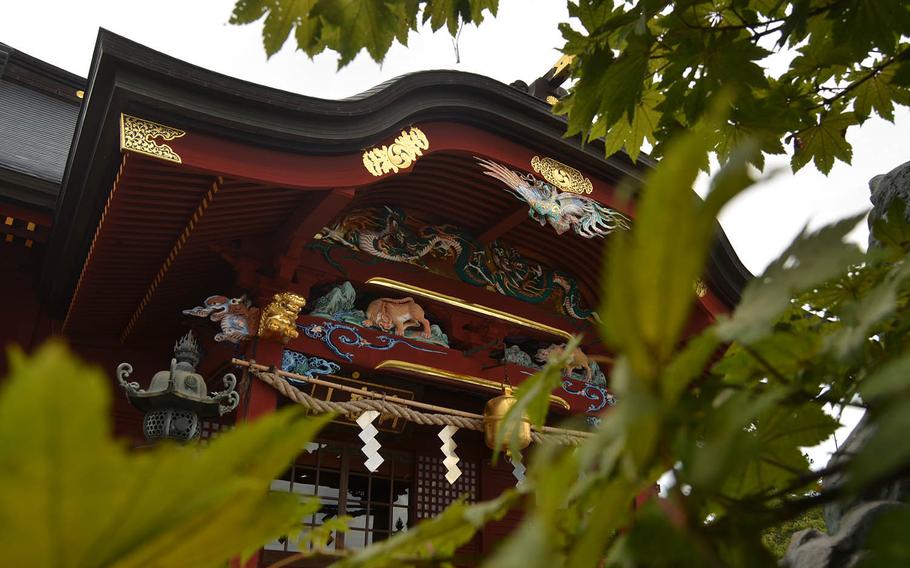 Buy Photo
Musashi Mitake Shrine on Mount Mitake in Japan is intricate in design and features depictions of wolves in its details. (Erica Earl/Stars and Stripes) 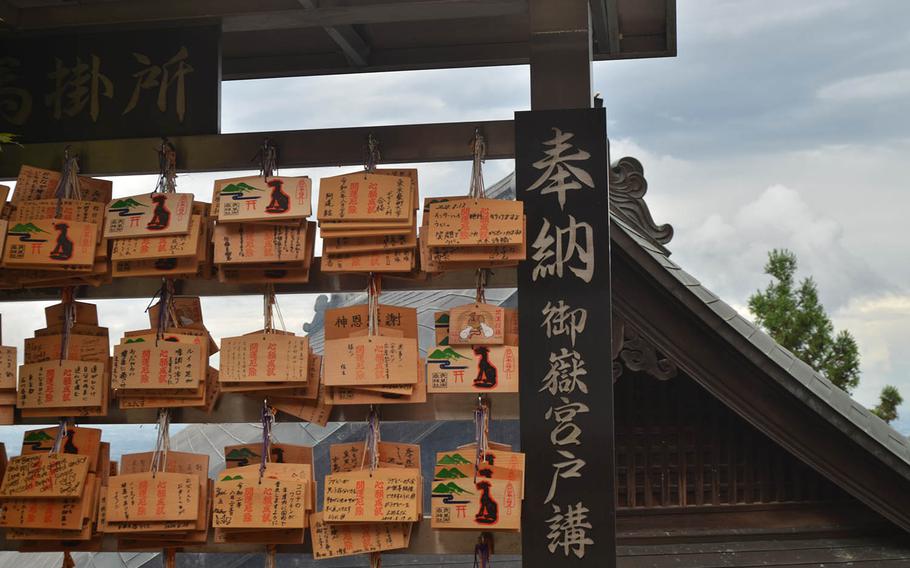 Buy Photo
Visitors to Musahi Mitake Shrine can write on planks of wood either their prayers and wishes or their grievances they would like to leave behind. (Erica Earl/Stars and Stripes)

As you make your way on a hilly trail canopied by greenery, you come across a small village. After a traditional Japanese tea, the winding path leads you to a beautiful staircase to a scene of statues, vibrant architecture and misty mountain views.

While it might sound like a dreamscape, this outing is an easily accessible day trip in the Okutama region, just one hour away from Yokota Air Base in western Tokyo, and tends to be less crowded than the popular Mount Takao.

Mount Mitake, one of the many highlights of the Chichibu-Tama-Kai National Park, features a railway and hiking path that takes visitors on a journey through a tranquil forest, a charming small village and a shrine.

A trip to Mount Mitake can easily be made into a full-day visit, starting with the funicular up the steep incline.

The Mitake Tozan Railway costs 1,130 yen, about $10.75, for a round-trip ticket and takes six minutes to make its way to the base of the trail. Visitors can purchase tickets with either cash or their Suica or PASMO transit cards.

I suggest sitting toward the back of the car facing outward to get the most of the sweeping views, as the sides and back of the train offer more of a sightseeing opportunity than the very small window to the tracks at the front of the train.

Much of the appeal of the winding, meandering 1 ½-mile hike from the train station to Musashi Mitake Shrine is the whimsical sensation of feeling like you are walking somewhere untouched and unexplored by outsiders rather than on a pre-determined path.

In addition to the natural beauty, the mountain and its shrine have historical and spiritual significance.

About two-thirds of the way to the shrine, the trail leads through a small, two-street village. The homes in the village and on the path to the peak of Mitake are mostly occupied by Shinto priest families who are caretakers for the park and shrine. Since the Edo period, locals have considered the hike up Mount Mitake to be a sacred pilgrimage.

The shrine and spaces around it boast a variety of wolf statues, making it a popular spot for visitors to bring their dogs. The appearances of wolves around shrines dates to a legend from year A.D. 150. In the story, Imperial Prince Yamata Takeru was saved by a large, mysterious white wolf while battling an evil spiritual entity.

Mount Mitake’s dedication to wolves is curious, however, because it was allegedly established before the legend of Takeru’s otherworldly acts of heroism.

In addition to the stunning red and gold Musashi Mitake is the Ubuyasusha, a humble yet beautiful wooden shrine believed to bring health, ease and happiness to families raising a child.

After paying respect to the shrines and appreciating the views from the mountaintop, visitors can rest and meditate in the rock garden on the back side of the mountain before making the trip back down.

On the trip, keep an eye out for Japanese giant flying squirrels, although a sighting is rare. I was not fortunate enough to see one in the flesh and had to settle for painted and carved depictions of them in the village shops.

While the shrines are said to nourish the soul, there are several options on Mount Mitake for nourishing the body. On the sojourn to the summit, it is recommended to stop in one of the tea or noodle shops in the village.

DIRECTIONS: About an hour by car from Yokota Air Base in western Tokyo. Google Plus code: Q4MX+5R Ome, Tokyo

FOOD: Tea shops and noodle shops are available in the village toward the top of Mount Mitake. Shops at the train station at the base of the trail offer snack options.