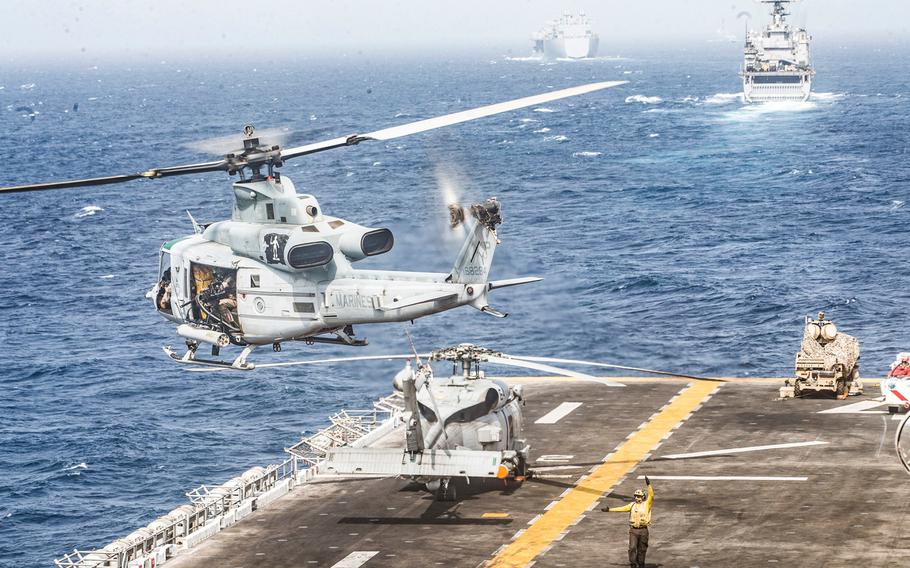 A UH-1Y Venom helicopter takes off from the flight deck of the amphibious assault ship USS Boxer (LHD 4) on July 18, 2019, while transiting through the Strait of Hormuz (Dalton Swanbeck/U.S. Marine Corps)

WASHINGTON — A U.S. Navy ship destroyed a drone in the Strait of Hormuz, the Pentagon announced Thursday.

The USS Boxer, an amphibious assault ship, was in international waters traveling into the Strait of Hormuz when a drone approached the ship and “closed within a threatening range,” according to a statement by Jonathan Hoffman, chief Pentagon spokesman.

“The ship took defensive action against the [drone] to ensure the safety of the ship and its crew,” according to the statement. The incident occurred at approximately 10 a.m. local time.

U.S. Marines from the 11th Marine Expeditionary Unit aboard the USS Boxer used “counter-drone jamming equipment” to take down the drone, according to a CNN report citing a U.S. official.

President Donald Trump said Thursday at the White House that it was an Iranian drone that threatened the ship.

“The drone was immediately destroyed,” he said, adding the drone came within about 1,000 yards of the ship and ignored “multiple calls to stand down.”

The drone was “threatening the safety of the ship and the ship's crew,” Trump said.

According to Cmdr. Rebecca Rebarich, a Pentagon spokeswoman, the drone “was assessed to be Iranian.”

Iran on Friday denied that it had lost a drone, but the country’s top military spokesman appeared to confirm that one had approached the Boxer.

Calling Trump’s claim “delusional and groundless,” Iran’s Brig. Gen. Abolfazl Shekarchi said on Friday to the semi-official Mehr news agency that all of Iran’s drones in the area had returned safely to their bases after completing scheduled surveillance and control operations, “including the one mentioned by the U.S. president.”

In another denial, one senior Iranian official tweeted out a theory Friday that the American warship had downed its own unmanned aerial system.

“We have not lost any drone in the Strait of Hormuz nor anywhere else,” said Seyyed Abbas Araghchi, Iran’s deputy foreign minister. “I am worried that USS Boxer has shot down their own UAS by mistake!”

Trump called on all nations to condemn Iran’s attempts to disrupt “freedom of navigation and global commerce.” He also called on other nations to protect their ships going through the strait, a major thoroughfare for the world’s oil, which Iran has threatened to block.

“This is the latest of many provocative and hostile actions by Iran against vessels operating in international waters,” Trump said. “The United States reserves the right to defend our personnel, our facilities, and interests."

Since May, six oil tankers have been damaged in attacks in the Gulf of Oman that the United States has blamed on Iran. Tehran has denied any involvement.

Last week, a British warship in the Persian Gulf prevented three Iranian patrol boats from stopping a British merchant ship as it was entering the Strait of Hormuz.

The Trump administration has been pressuring Iran through sanctions since the United States withdrew last year from a 2015 international agreement restricting Iran’s nuclear program. Tehran has protested against the pressure campaign and has recently said it would increase its uranium enrichment beyond levels allowed under the nuclear accord.

The United States is sending about 2,000 troops to the Middle East to bolster security for American personnel and interests in the region. In May, the White House announced the Unites States was sending the USS Abraham Lincoln Carrier Strike Group, along with a B-52 bomber task force, to the region, citing unspecified Iranian threats.

Tensions escalated further in June after Iran shot down a U.S. drone. Trump approved retaliatory military strikes but halted them minutes before they were launched.