Navy kicks off its latest multinational exercise in the Western Pacific Buy Photo
A helicopter pilot walks the runway at Andersen Air Force Base, Guam, during the inaugural Pacific Vanguard exercise, Friday, May 24, 2019. (Caitlin Doornbos/Stars and Stripes) 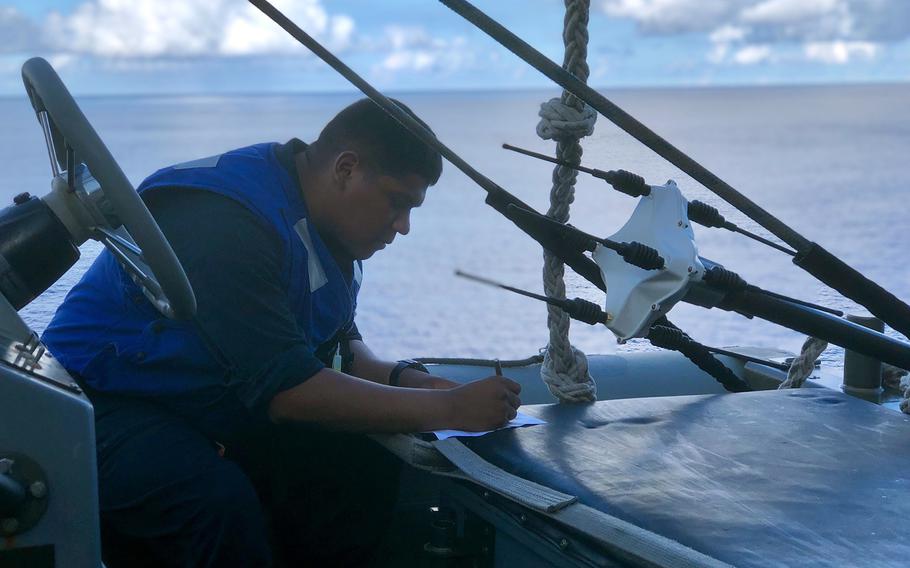 Buy Photo
A sailor works aboard the USS Antietam guided-missile cruiser during a Pacific Vanguard drill near Guam, Friday, May 24, 2019. (Caitlin Doornbos/Stars and Stripes) 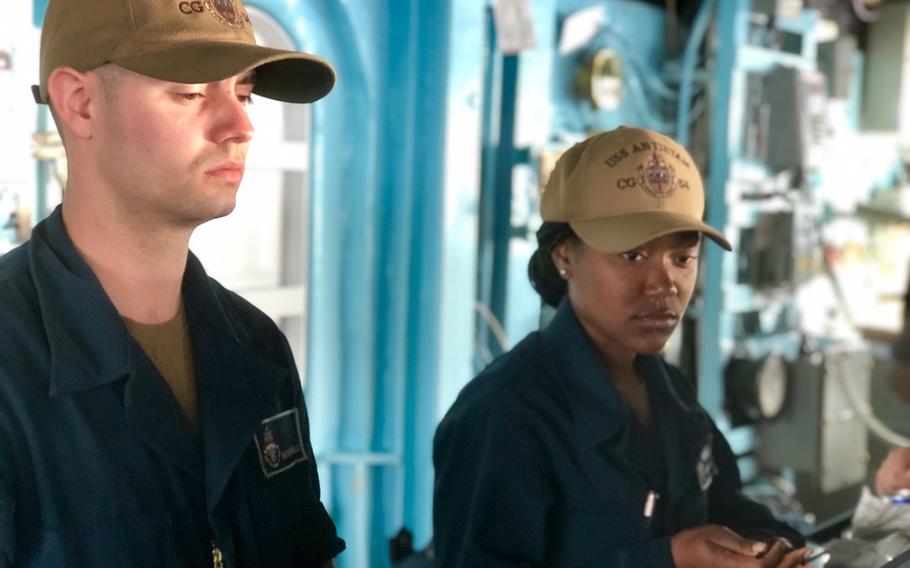 Buy Photo
Sailors aboard the USS Antietam work in the bridge of the guided-missile cruiser during the Pacific Vanguard exercise near Guam, Friday, May 24, 2019. (Caitlin Doornbos/Stars and Stripes) Buy Photo
Sailors meet aboard the USS Antietam to discuss an operation during the Pacific Vanguard drill near Guam, Friday, May 24, 2019. (Caitlin Doornbos/Stars and Stripes)

ABOARD THE USS ANTIETAM — Ships from four partner nations maneuvered around each other in waters near Guam Friday morning, working together on a common goal: Find the submarine.

Helicopters flew ahead of the ships, which kept their distance from the imagined submarine, just as they would in actual combat, said Capt. George Kessler, commander of the guided-missile cruiser USS Antietam. Once they found the sub, the helicopters then “prosecuted” — or fired at — the hypothetical target.

The submarine hunt was one portion of the inaugural, six-day Pacific Vanguard exercise involving naval vessels from the United States, Japan, South Korea and Australia.

Although armed forces from the four nations have previously exercised together in some combination, the Navy described Pacific Vanguard as a “first of its kind event” in a statement issued Wednesday.

“It’s unique in that it’s an exercise focused on those four allies,” Kessler said. “These are our allies that we operate with on a consistent basis.”

The exercise, which is slated to conclude Tuesday, involves 3,000 sailors and 10 ships in the waters off Guam. The drills include live-fire exercises, defensive counter-air operations, anti-submarine warfare and replenishment at sea, according to the Navy statement.

Conducting two exercises per year “is indicative to the strength of the partnership and the desire that we have to work together and continue to push forward to ensure that we can operate seamlessly,” Kessler said. The beauty of the Northern Marianas served as a backdrop to the exercise. Rainbows formed in Guam’s sunny skies above ships from the four nations.

The idea for the multilateral event was generated at a meeting of the four nations’ fleet commanders last year. The Pacific allies each work to maintain a “free and open Pacific,” Kessler said.

“The United States has been focused on maintaining the global commons, and Australia, Japan and Korea also have that same focus,” he said. “What that means is we need to be prepared to address any contingency … and in order to do that you have to practice and work together.”

Pacific Vanguard is the latest multilateral exercise in the Western Pacific, where the allies are working to counter territorial claims that China asserts on islands, reefs and reclaimed land in the South and East China seas.

Since April, U.S. Navy vessels have joined on several occasions with ships from one or more countries for maneuvers in the Indo-Pacific region.

For example, the destroyer USS Preble and Australian frigate HMAS Melbourne trained together April 19 in the Philippine Sea.

In early May, the guided-missile destroyer USS William P. Lawrence, the JMSDF helicopter carrier JS Izumo and destroyer JS Murasame took part in a naval exercise with ships from India and the Philippines in the South China Sea.

On May 16, the Lawrence, Izumo and Murasama joined three other ships from France and Australia for maneuvers in the Bay of Bengal.

The same day, during a press briefing from Manila, U.S. Chief of Naval Operations Adm. John Richardson called for new chances to work alongside partner nations to preserve international access to the Indo-Pacific.

“Opportunities to work together, exercise together, be present together — those, I think, are things that we’re constantly looking for,” he said.

When four nations that speak three different languages work together, communication, aside from warfare maneuvers, is a main focus, Kessler said. The countries do not use translators to communicate, but instead use English, a second language to the Koreans and Japanese.

“[We are] working together with the ability to communicate across four different countries and pass the information across each unit that’s necessary for us to operate at sea,” Kessler said.

U.S. Navy Capt. Hans Sholley, chief of staff for Joint Region Marianas, said it’s beneficial to hold Pacific Vanguard in Guam, which “has long been a strategic location in the Western Pacific.”

“Anytime you have sailors from different navies operating together, sharing tactics, techniques and procedures … ensures we are prepared for any challenges that may arise in the region,” he said.