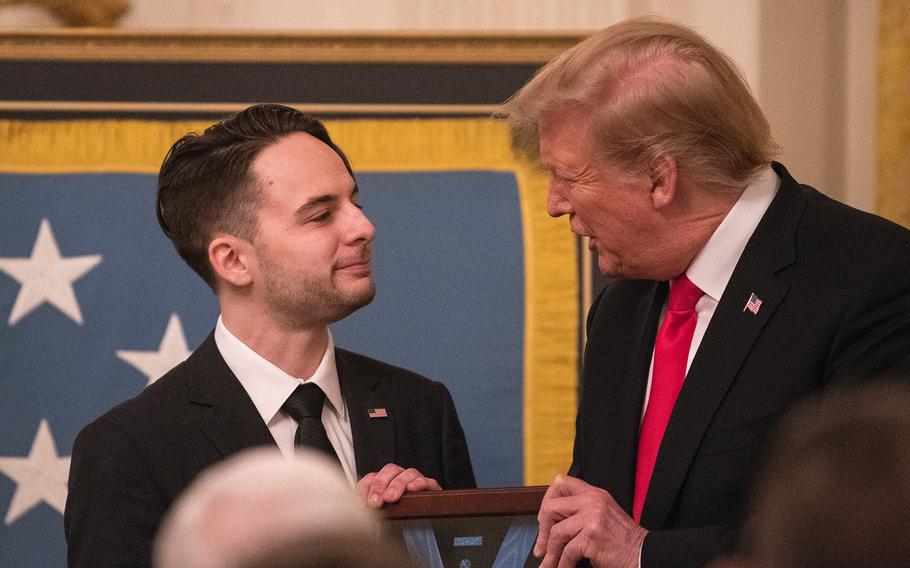 Buy Photo
President Donald Trump presents, during a ceremony at the White House on Wednesday, March 27, 2019, the Medal of Honor to Trevor Oliver who accepted the posthumous recognition on behalf of his father Staff Sgt. Travis Atkins who was killed in action in Iraq in 2007. (Carlos Bongioanni/Stars and Stripes) 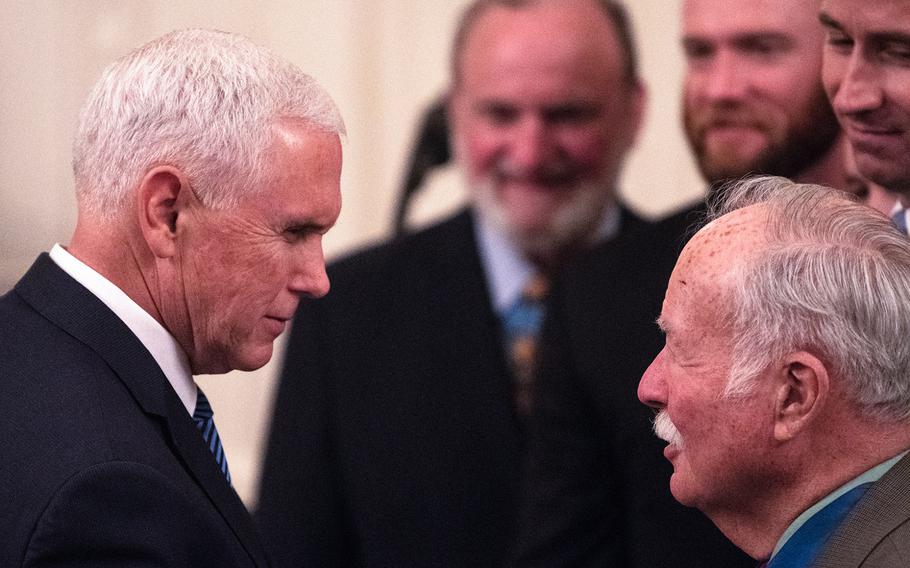 Buy Photo
President Donald Trump speaks during a Medal of Honor ceremony at the White House as Trevor Oliver, who accepted the posthumous recognition on behalf of his father Staff Sgt. Travis Atkins, listens, on Wednesday, March 27, 2019. (Carlos Bongioanni/Stars and Stripes ) Buy Photo
The family of Staff Sgt. Travis Atkins join President Donald Trump during a Medal of Honor ceremony at the White House on Wednesday, March 27, 2019. Atkins' son Trevor Oliver, standing to the left of the president, accepted the posthumous recognition on behalf of his father who died in Iraq in 2007. (Carlos Bongioanni/Stars and Stripes)

WASHINGTON — Trevor Oliver stood before a standing-room only crowd in the White House East Room on Wednesday and listened intently as President Donald Trump praised his father and his decision some 12 years ago to trade his own life to spare three other Americans on a dusty road in Iraq.

Oliver, the 22-year-old son of late Army Staff Sgt. Travis Atkins, took a deep breath moments before Trump was to present him with the Medal of Honor, the nation’s highest military honor, for his father’s actions in June 2007 — tackling a suicide bomber and using his own body to shield three other soldiers from the blast.

As Oliver prepared to accept the medal Wednesday afternoon, Trump turned to him. In an unscripted moment, the president asked the young man to speak about his late father.

Receiving the Medal of Honor for his dad was “an absolute honor” and a “surreal moment,” Oliver said over a standing ovation of uniformed servicemembers and civilians.

“I still haven’t fully accepted it yet,” he said. “Just all over appreciation for his men, and all of the things you all have said to me over the past couple of days. It has meant the world to me, and it changes my life. The medal is something that I take a lot of pride in, but it is your words that mean the most to me.”

Those words were the stories regaled in recent days to Oliver and other members of the Atkins family of Travis Atkins’ actions in Iraq and the anecdotes that told of the fallen sergeant's impressive military service and his, at times, R-rated sense of humor.

Trump, who made the decision last year to elevate the Distinguished Service Cross that Atkins’ family initially received in 2008 for his actions to the nation’s top military honor, thanked the fallen soldier's family for his willingness to make “the supreme sacrifice” for other servicemembers.

“In his final moments on Earth, Travis did not run,” Trump said. “He didn’t know what it was to run. He did not hesitate. He rose to the highest calling, and he laid down his life to save the lives of his fellow warriors.”

Among the attendees Wednesday at the White House were the three men who were only a few feet away when the suicide bomb went off that instantly killed Atkins. Another 50 some soldiers who served in the Army’s 10th Mountain Division also attended, Trump said.

‘He saved my life’It was not immediately clear to former Army Sgt. Sand Aijo what his squad leader was doing as he watched Atkins body slam a young man onto that dusty road known as Route Caprice in rural Iraq on June 1, 2007.

From the turret of his Humvee, Aijo watched as Atkins, who earned respect through his actions and attention to detail, methodically moved his body directly between the pinned-down man and that of Aijo and two other American soldiers. Then came the explosion.

“He saved my life and the life of several others,” Aijo said Tuesday at the Pentagon, recalling Atkins’ act on that hot day near the village of Abu Samak in a stretch of Iraqi territory known at the time as the Triangle of Death. “I would not be here today without him.”

At 31, it was Atkins’ second tour in Iraq. He initially enlisted in the Army from his hometown in Bozeman, Montana, in 2000. Less than three years later, he fought during the invasion of Iraq with the 101st Airborne Division as an Army fire team leader. He would earn a Combat Infantryman Badge and other awards during that tour. After returning home, he decided not to re-enlist, choosing instead to go to college.

But after two years at the University of Montana at Missoula, Atkins found his classmates immature, his mother Elaine Atkins said. In late 2005, he re-enlisted in the Army and was sent to Fort Drum and, eventually, back to Iraq.

Atkins’ unit – the 10th Mountain Division’s 2nd Battalion, 14th Infantry Regiment – was about 10 months into its tour when the soldiers received the radio call of four “military-aged males” acting oddly along Route Caprice, an off-limits-to-locals supply route that had become a favorite target of insurgents for emplacing roadside bombs.

The improvised explosive devices were often successful, mangling the soldiers’ Humvees. Atkins’ own vehicle had recently been struck. But suicide attacks were unusual.

Atkins' battalion commander at the time of his death, now retired Col. John Valledor, said the unit had not seen such an act through its entire deployment before June.

When Atkins spotted two of the four males acting erratically, he left his Humvee unarmed, yelling directions at the men, Aijo recalled. As Atkins moved toward one of the men, the team’s medic moved toward the second man.

“It all happened so quickly,” Aijo said. “My initial thought was that maybe they had rolled onto a [roadside bomb]. It didn’t become more clear to me until the second man came around and he also detonated. That’s when it clicked for me that this is what had happened.”

An upgradeThe award is an upgrade of the Distinguished Service Cross that Atkins’ family received in a 2008 ceremony at Fort Drum in New York, where the soldier had been stationed.

That upgrade, part of a Defense Department-wide review of post-9/11 valor awards ordered by former Defense Secretary Chuck Hagel in 2014, is long overdue, soldiers who served with Atkins have said for years.

Valledor recognized what the soldier had done almost immediately. He interviewed Aijo and the two other soldiers who had witnessed the attack and walked the scene in the hours after Atkins’ death. He quickly drew his conclusion – Atkins had committed an exceptionally valorous act. It was an act that in his mind clearly deserved the military’s top honor.

“It occurred to me there’s a similar pattern here to Medal of Honor recipients who had jumped on grenades,” Valledor said. “The only difference here is it was a living grenade that Travis had overpowered and then used his body to protect his fellow soldiers. I thought for sure that others would see it, or read it the same way that I did.”

But somewhere along the long line of approvals needed to secure a Medal of Honor nomination, someone did not agree. The Army has never made public who decided to downgrade the award to the Distinguished Service Cross, the second highest award for battlefield valor. Valledor and others have speculated the decision to downgrade the award might have occurred because Atkins never verbally told the other soldiers around them what his intent was.

Aijo and other soldiers who knew Atkins have no doubt that he knew he was shielding his battle buddies from the explosive vest.

Former Army Staff Sgt. Stuart Hollingsworth, a member of Atkins’ platoon who was about 100 yards away when the attack occurred, described Atkins as an expert at recognizing weapons and would have quickly realized the insurgent was wearing the grenade-laced suicide vest.

Aijo credited Atkins not only with saving his life by shielding him from the blast, but with instilling in him the skills and maturity needed to deal with such a deadly clash.

The former soldier said he and others were not initially pleased when Atkins showed up to their unit. Aijo described himself as a “cocky, 19-year-old kid” who was not thrilled to have a new noncommissioned officer who set high expectations for his troops.

“I hated it,” Aijo said. “I thought I knew everything. He came in, and he put me in my place. He did it in the best way possible, and when that day came, I was prepared and I acted appropriately. I don’t know if I would have with anybody else leading me.”

That trait in Atkins comes as no surprise to Elaine and Jack Atkins, the late soldier's parents. They said Tuesday that they were aware their son had once been considered for the Medal of Honor but were caught by surprise when they were informed of the upgrade.

More important to them, said Jack Atkins, was the respect their son’s fellow soldiers have shown for him in the months since they learned of the award upgrade.

“I am not surprised to hear what Travis did,” Jack Atkins said. “This award is one thing. The real award for us is that these guys showed up.”