Jane McCarthy, left, hugs Janis Nark, right, at the Vietnam Women's Memorial on Sunday, Nov. 11, 2018. Both women were part of the Army Nurse Corps. Nark began to cry while recounting some of the patients she treated in Vietnam. (NIKKI WENTLING/STARS AND STRIPES) 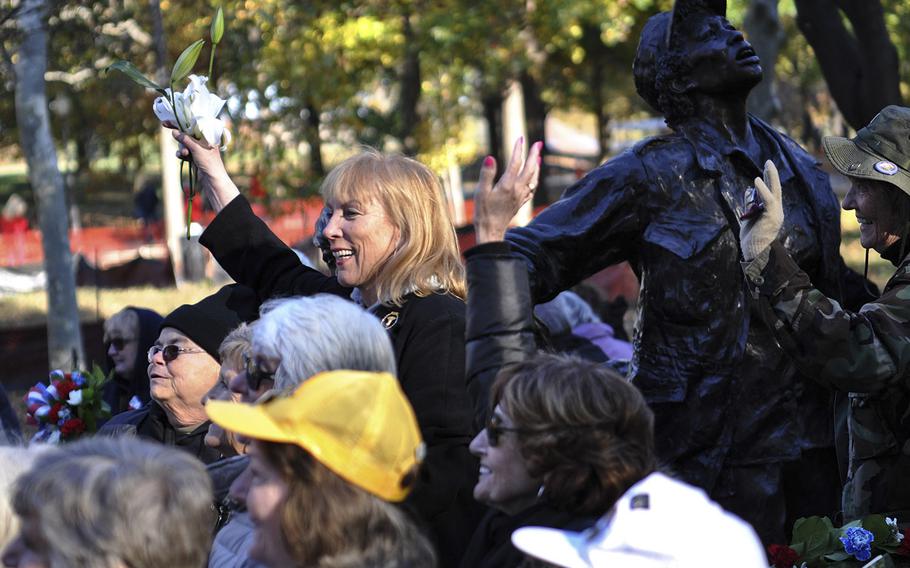 Janis Nark of Aspen, Colo., holds up flowers during a group photo at the Vietnam Women's Memorial on Sunday, Nov. 11, 2018. About 60 Vietnam nurses traveled from across the country to attend the event, which marked 25 years since the memorial was established on the National Mall. (NIKKI WENTLING/STARS AND STRIPES) 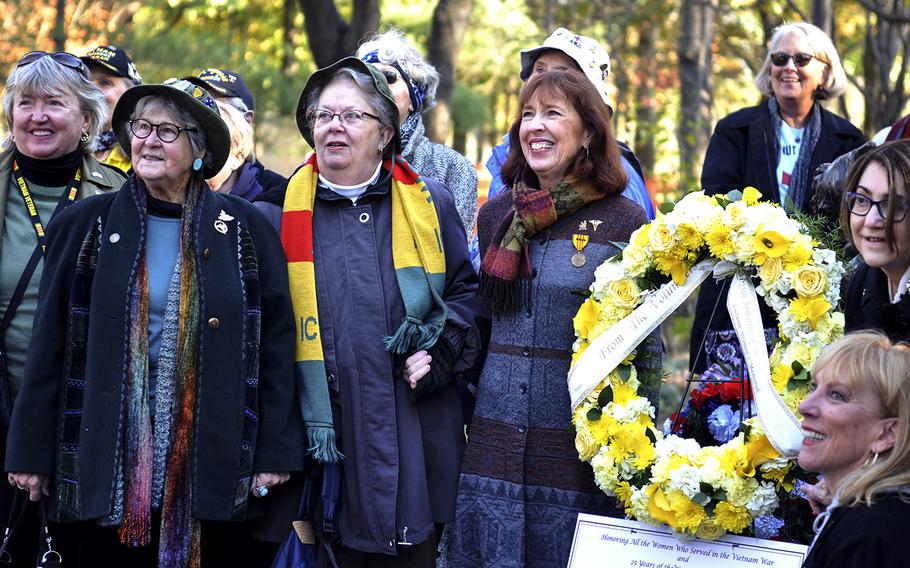 Diane Carlson Evans, left, and Amelia Jane Carson, left, pose for a photo in front of the Vietnam Women's Memorial on Nov. 11, 2018. The two women, both Army nurses in Vietnam, led the charge to establish the memorial. It was dedicated 25 years ago, on Nov. 11, 1993. (NIKKI WENTLING/STARS AND STRIPES) 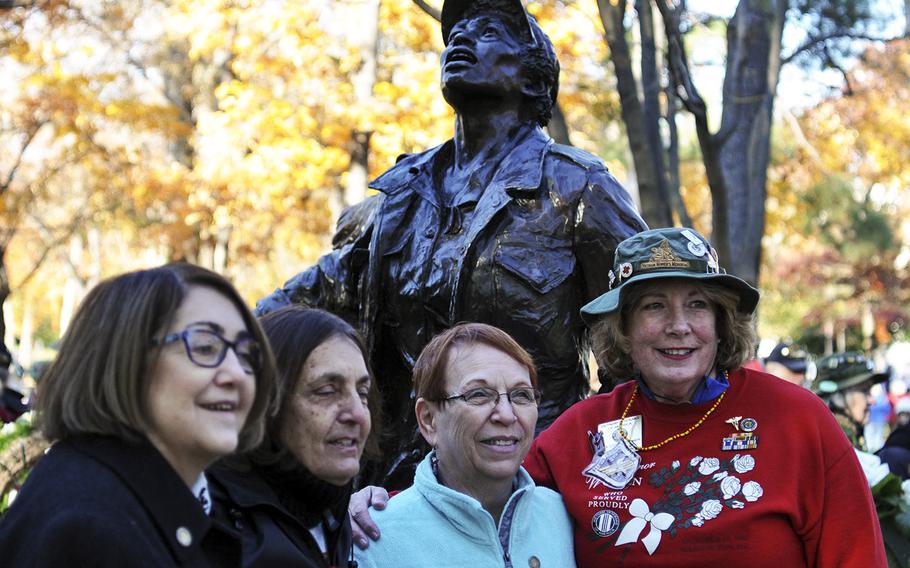 Women pose in front of the Vietnam Women's Memorial following a Veterans Day ceremony on Sunday, Nov. 11, 2018. About 60 Vietnam nurses traveled from across the country to attend the event, which marked 25 years since the memorial was established on the National Mall. (NIKKI WENTLING/STARS AND STRIPES)

WASHINGTON – Dozens of former Army nurses from across the country gathered Sunday around the bronze sculpture dedicated to their service in the Vietnam War.

While encircling the Vietnam Women’s Memorial, some of the women flipped through old photos from Vietnam or began to cry while remembering servicemembers they treated there. Most of them draped their arms around each other, smiled and snapped photos.

Sunday marked the 25th anniversary since the memorial was established on the National Mall – the result of a nine-year fight to recognize the women’s service.

A total 265,000 women served in the armed forces during the Vietnam War, 10,000 of whom were nurses. Eight female nurses died in the conflict.

“Twenty-five years ago, we came here to dedicate a long-awaited monument honoring the achievements, sacrifices and devotion to duty of women who served during the Vietnam era,” said Diane Carlson Evans, a Vietnam nurse. “The monument has placed an image of American women in uniform firmly in the American conscious.”

Evans founded the Vietnam Women’s Memorial Foundation and spearheaded the campaign in the 1980s to create the national monument. She spoke Sunday during a Veterans Day ceremony at the Vietnam Veterans Memorial.

In the 1980s and early 1990s, Evans and others who helped with the effort to build the Vietnam Women’s Memorial struggled against pushback from some congressional lawmakers and the news media.

“The sculpture arrived following years of controversy and outright rejection by government agencies and public figures,” Evans said. “Yet, these women had shouldered the war together with our brother veterans. We saved lives. We sustained their mission by working together in many roles.”

Retired Army Col. Amelia Jane Carson helped see that it was built. Evans enlisted the help of Carson, a former Vietnam nurse who was then working in the Pentagon.

“All the wars and the multitude of statues in Washington, D.C., and not one – not one – recognized the service of women to our military,” Carson said Sunday.

The memorial has been a source of healing for Carson, who struggled with depression after returning from Vietnam.

“So what does the memorial mean to us who carry so much grief from so many years ago? To me, this is a place of healing, hope, compassion and love,” she said. “It is a reminder that no veteran, regardless of their gender, will ever be forgotten.”