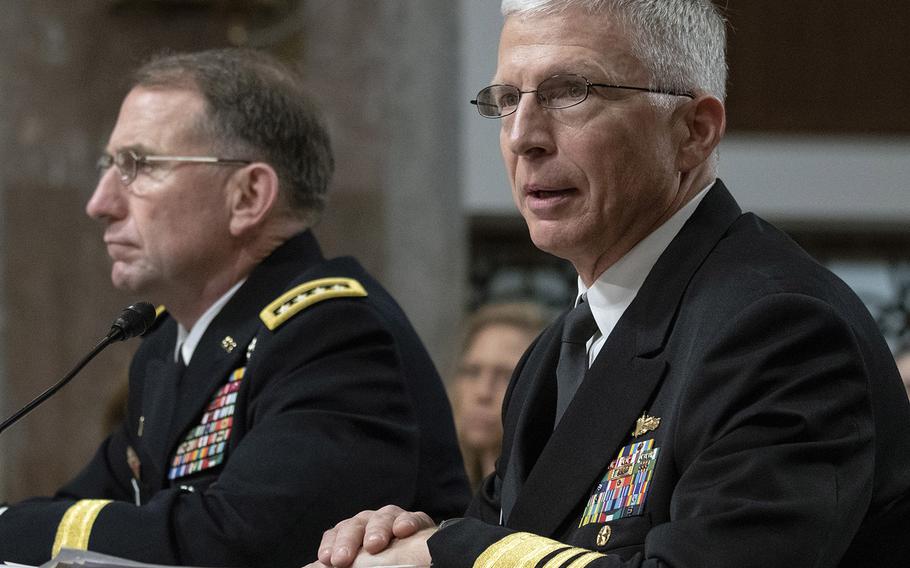 Vice Adm. Craig S. Faller, right, answers a question during a Senate Armed Services Committee confirmation hearing on Capitol Hill, Sept. 25, 2018. At left is Gen. Robert B. Abrams, who was nominated to serve as the next commander of U.N. Command, Combined Forces Command and U.S. Forces Korea. (Joe Gromelski/Stars and Stripes) 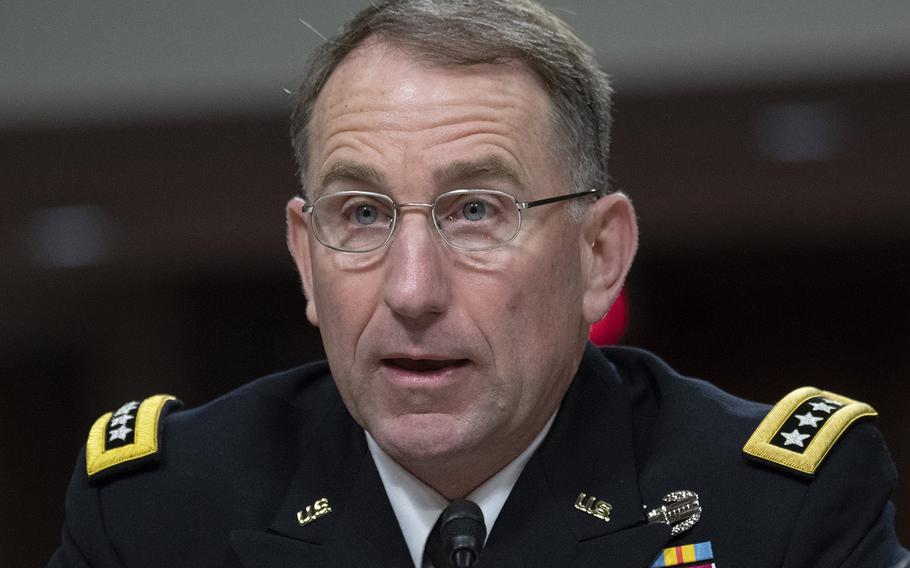 Gen. Robert B. Abrams, at a Senate Armed Services Committee hearing in 2018. (Stars and Stripes)

WASHINGTON — Army Gen. Robert B. Abrams was confirmed to become the next commander of U.S. Forces Korea in a series of Senate approvals for military nominees during a marathon session Thursday.

Vice Adm. Craig S. Faller was also confirmed as commander for U.S. Southern Command after fending off concerns of his ties to the so-called “Fat Leonard” scandal.

Abrams and Faller were among Defense Department nominees confirmed by the Senate in a long day for the upper chamber Thursday. The Senate was racing to leave for October recess ahead of the midterm elections in November. The House left earlier this month and isn’t slated to return until after the elections.

“Each of these nominees deserve confirmation, and I would urge our colleagues to approve all of them,” Senate Majority Leader Mitch McConnell, R-Ky., said ahead of the Thursday session.

Abrams and Faller testified before the Senate Armed Services Committee last month about their nominations.

Since August 2015, Abrams has led Fort Bragg-based Army Forces Command, the largest command in the service. His responsibilities included ensuring combat soldiers are trained and prepared to deploy. Abrams, nominated as commander of U.S. Forces Korea, United Nations Command and Combined Forces Command in Korea, told senators last month that addressing a pause in U.S.-South Korea military exercises would be a top priority under his watch.

The joint exercises were stopped following the June summit in Singapore between President Donald Trump and North Korea’s Kim Jong Un, a move that drew criticism that the lack of training would hurt military readiness on the Korean Peninsula. The United States and South Korea conduct two major sets of military exercises each year — Foal Eagle and Key Resolve in the spring and Ulchi Freedom Guardian, which was slated for August and then cancelled.

“I think that there was certainly degradation to the readiness of the force for the combined forces. [Ulchi Freedom Guardian is] a key exercise to maintain continuity and to continue to practice our interoperability,” Abrams said of the pause.

In his Senate testimony, Faller who has served as the senior military assistant to Defense Secretary Jim Mattis since January 2017, said he was cleared of any wrongdoing in connection with companies tied to Leonard Glenn Francis, the infamous defense contractor from Singapore known as “Fat Leonard.” Francis confessed to bribing dozens of U.S. Navy officials with expensive gifts, wild parties and prostitutes.

Last month, the Washington Post reported Faller accepted dinners from Francis. At the time, he was captain and commanding officer of the USS Shiloh, a guided missile cruiser.

“I’ve never solicited, accepted or asked for a gift from Glenn Marine Defense [one of several companies affiliated with Francis] and every decision I made, event I attended, I had had ethics counsel review,” Faller said during the Sept. 25 hearing.

McConnell made special note of Stewart’s nomination on the floor Thursday.

“The president’s choice to serve as assistant secretary for manpower, Mr. Stewart’s experience managing military manpower runs deep through his distinguished career in the U.S. Air Force from which he retired as major general,” McConnell said.

Stewart most recently served on the North Carolina military affairs commission and on the secretary of defense’s reserve forces policy board, McConnell added.

The Senate also approved for the Navy, Vice Adm. Andrew L. Lewis, who has served as deputy chief of naval operations, to serve as commander of the 2nd Fleet, which serves the East Coast of the United States and north Atlantic Ocean.

In May, the 2nd fleet was reactivated in the midst of new tensions with Russia.