From Norway to Spain, fifth-generation fighters fly for defense of Europe A U.S. Air Force F-22 Raptor comes in for an aerial refueling from a KC-135 Stratotanker of the RAF Mildenhall-based 100th Air Refueling Wing, over Norway, Wednesday, Aug. 15, 2018. (MICHAEL ABRAMS/STARS AND STRIPES) A U.S. Air Force F-22 Raptor of the 325th Fighter Wing flies off the wing of a KC-135 Stratotanker of the 100th Air Refueling Wing after taking on fuel on its way to Norway, Wednesday, Aug. 15, 2018. Two Raptors were joined in the air by two Norwegian air force F-35s. (MICHAEL ABRAMS/STARS AND STRIPES) 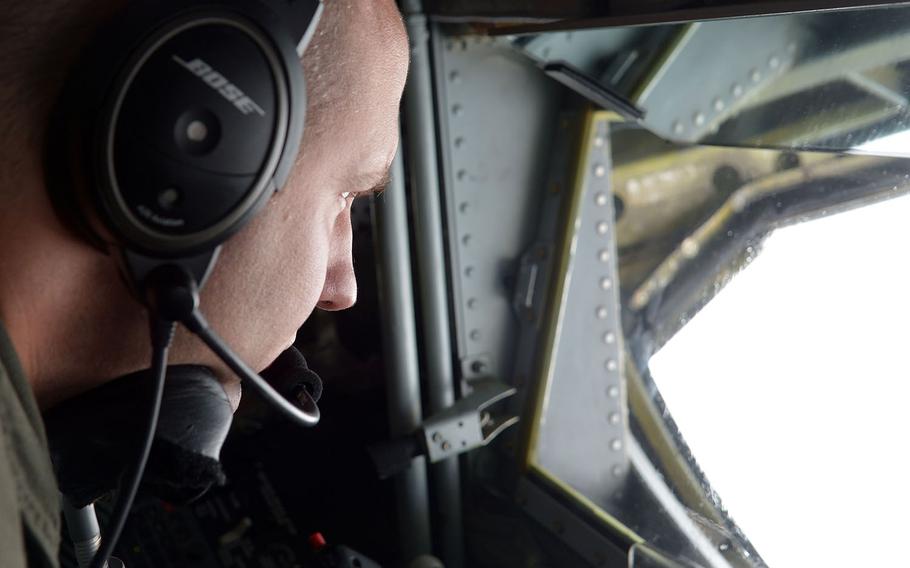 Tech Sgt. Justin Miller, a boom operator on a RAF Mildenhall-based KC-135 Stratotanker of the 100th Air Refueling Wing, waits for a F-22 Raptor to show up for an aerial refueling over Norway, Wednesday, Aug. 15, 2018. (MICHAEL ABRAMS/STARS AND STRIPES) 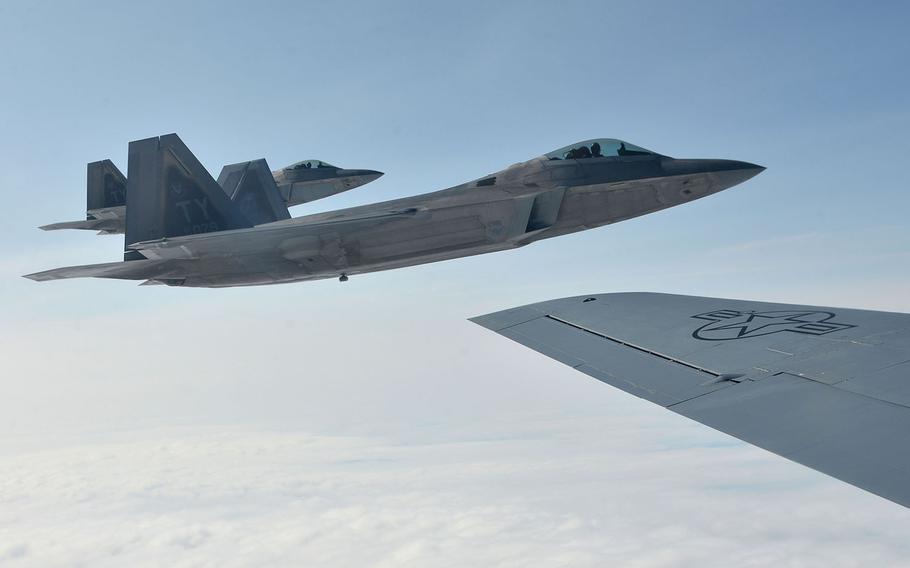 Two U.S. Air Force F-22 Raptors of the 325th Fighter Wing fly off the wing of a KC-135 Stratotanker of the 100th Air Refueling Wing after taking on fuel on their way to Norway, Wednesday, Aug. 15, 2018. Two Raptors were joined in the air by two Norwegian air force F-35s. (MICHAEL ABRAMS/STARS AND STRIPES) 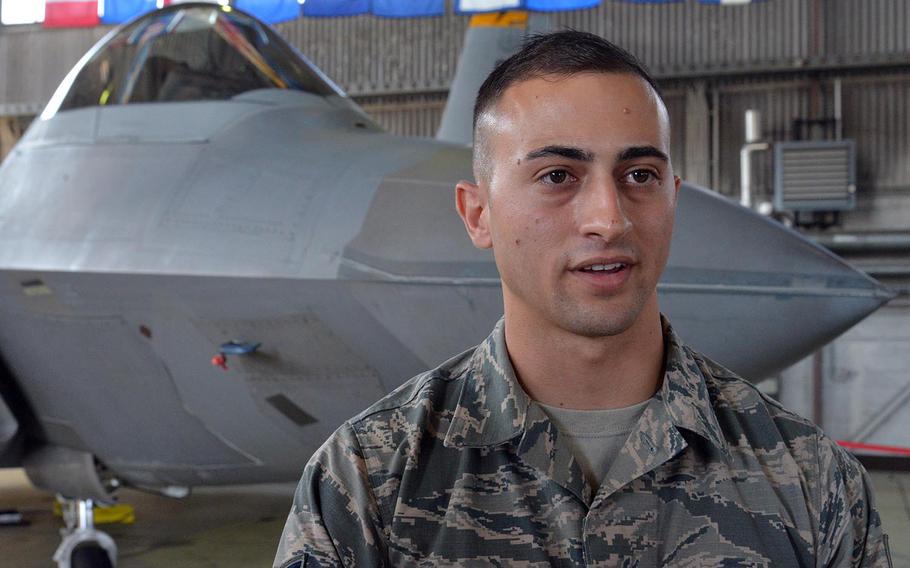 Staff Sgt. Nicholas Chaplin, a F-22 avionics technician talks about taking care of the fifth-generation aircraft while deployed. Behind him is one of the Raptors that are deployed to Spangdahlem Air Base, Germany from Tyndall Air Force Base, Florida. (MICHAEL ABRAMS/STARS AND STRIPES) 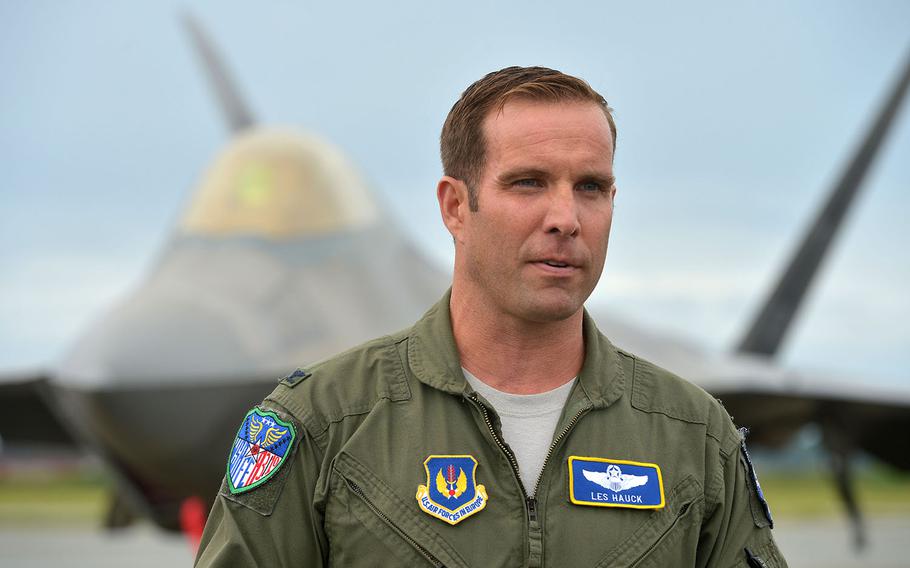 U.S. Air Force Col. Les Hauck talks to reporters at Orland Main Air Station, Norway, Wednesday, Aug. 15, 2018. Behind him is a USAF F-22 Raptor that flew in from Spangdahlem Air Base, Germany. (MICHAEL ABRAMS/STARS AND STRIPES)

ORLAND MAIN AIR STATION, Norway — It took a deployment to Germany and a shorter hop to this remote Norwegian air base for Florida-based F-22 Raptor pilot Lt. Col. Matthew Tromans to get a close encounter with another premier fifth-generation aircraft.

But the two F-35s that Tromans and fellow F-22 pilot Capt. Ian Gregoire flew in overcast Nordic skies on Wednesday weren’t American. They belonged to the Norwegian air force, which is beginning to replace its aging F-16 fleet with the world’s most expensive and advanced weapons systems.

The two partners had the opportunity to train together because of the F-22’s recent deployment to Europe, part of a periodic rotation of fifth-generation aircraft from the States to Europe to support NATO allies and deter possible Russian aggression.

Tromans has trained occasionally with F-35s at Eglin Air Force Base, Fla., but mostly in situations “outside visual range,” he said. “So to come up and actually do visual maneuvering with these guys was a first for me in 10 years of flying the jet.”

A total of 48 aircraft will arrive in waves, and two squadrons will stand up at the F-15 U.K. base, said Hauck, chief of the U.S. Air Forces in Europe-Air Forces Africa fifth-generation integration division, a new office that oversees the transition of the F-35 into Europe.

“We realize there’s going to be around 130 F-35 aircraft (in allied service in Europe) before our first aircraft gets to Lakenheath,” Hauck said in Norway on Wednesday. “So it’s important for us to learn the aspects of the European theater and also learn from our partners. Today’s just the start of what we hope to do more of in the future.”

The Raptors’ visit to Norway was brief. By dinnertime, the pilots were back at Spangdahlem Air Base, Germany, where the 95th Fighter Squadron from Tyndall Air Force Base, Fla., deployed on Aug. 8. For a couple of weeks, 13 Raptors will train with Spangdahlem F-16s and partner air forces throughout Europe.

The deployment — the Raptors’ fourth to Europe since 2015 — is aimed at improving the fourth- and fifth-generation fleets of U.S. and allied aircraft that already operate in Europe, said USAFE-AFAFRICA commander Gen. Tod Wolters. The goal is “to the max extent possible we become a force that can deter to a greater degree, with greater” resilience, responsiveness and lethality, he told local and state government and military officials at Spangdahlem on Thursday.

Besides deploying to Norway, some of the Raptors have been to Poland, Greece, Italy and Spain for training. The squadron brought about 200 maintainers to Germany, said Staff Sgt. Nicholas Chaplin, an avionics technician. Though it’s been a busy deployment so far, the mechanics are catching a bit of a break, he said.

“Put an F-22 in Panama City, Fla. — swamp weather is difficult (for) aerodynamics,” he said, “and so they fly better out here. Dry and cold weather is really preferable for aircraft. We get a little bit of a break when we come out here.”

The deployment is partly paid for with European deterrence funds, Air Force officials said. Those funds became available after Russia’s 2014 annexation of Ukraine’s Crimean Peninsula, an act that has rattled NATO allies.

Maj. Morten Hanche, a Norwegian air force F-35 pilot who flew with the Americans in Norway this week, said training with allies was especially important for Norway. “As a very small nation in NATO, we are dependent on defense cooperation to be credible,” he said.

Norway is gradually expanding its F-35 program. The country is due to receive three more F-35s next month, bringing its total fleet to nine. It hopes to have 52 by 2024, Norwegian air force officials said.

The much-maligned F-35 fighter jet program has been hampered by soaring costs and technical problems. Earlier this year, the Pentagon, in response to a government watchdog report, agreed to fix deficiencies before moving to full production. The F-35 has also been criticized for supposedly not being as maneuverable as the Russian Sukhoi Su-35 Flanker-E air superiority fighter, which has impressed observers by its performance over Syria.

But Hanche said Norway so far has been satisfied with the plane.

“It’s very easy to learn how to operate, especially doing the tactics, it’s so automated,” he said. “You can deal with more threats and more advanced threats.”

“We can get closer to the enemy before they know we’re there,” he said.

For the former A-10 pilot at Spangdahlem, stealth was not an option. Schmidt was asked to switch over to the F-35 for his close-air-support expertise. Close-air support, the A-10’s forte, is also one of the F-35’s many mission sets.

“It was really important as we press into the future that we didn’t lose that particular mission set,” he said.

When European allies call with questions about F-35 operations, “now he can [give them] the true story of what he’s seen in the air,” said Hauck, an F-16 pilot.

How common are such inquiries? “It’s starting,” he said.