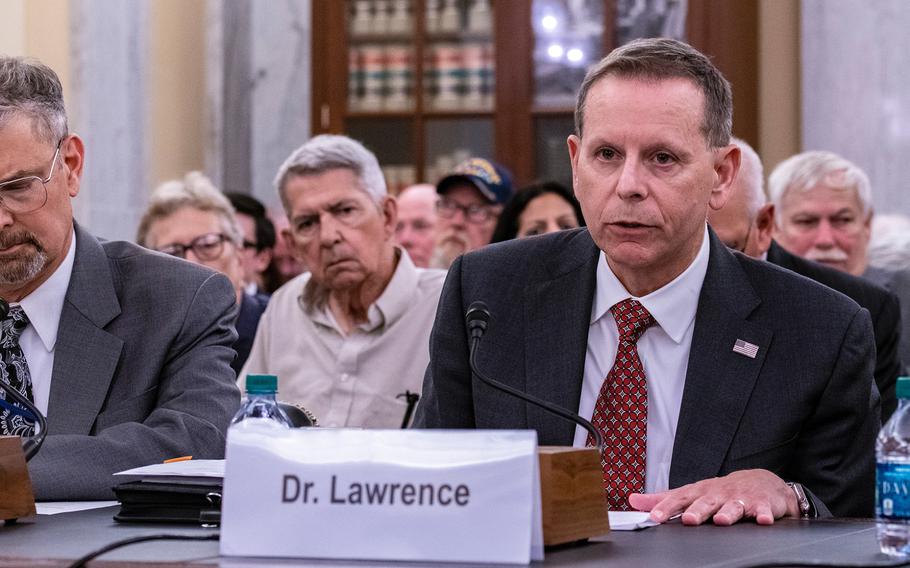 Buy Photo
Department of Veterans Affairs undersecretary of benefits Paul Lawrence testifies during a Senate Veterans Affairs Committee hearing on Wednesday, Aug. 1, 2018. Lawrence urged senators Wednesday to vote against legislation that would extend VA benefits to sailors who served off the coast during the Vietnam War and claim their illnesses were caused by exposure to Agent Orange. (Carlos Bongioanni/Stars and Stripes) 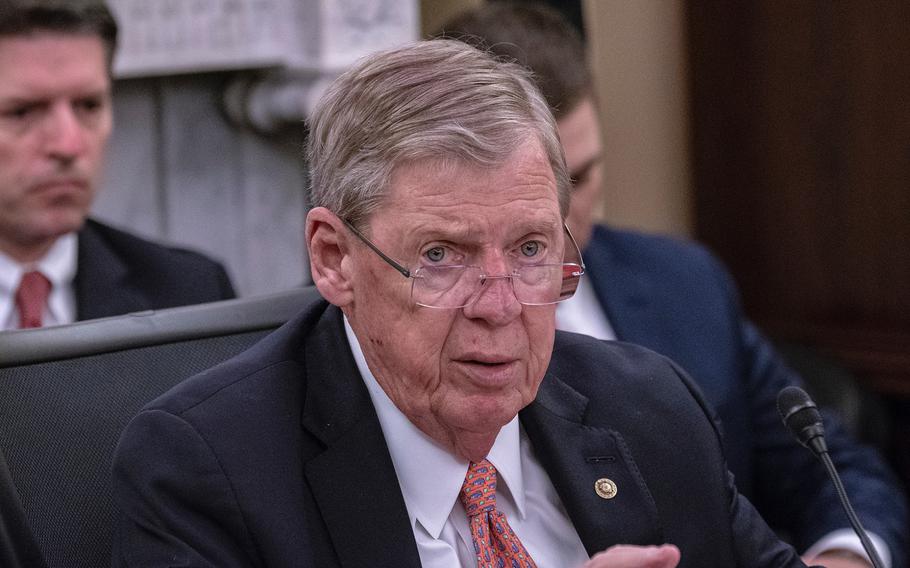 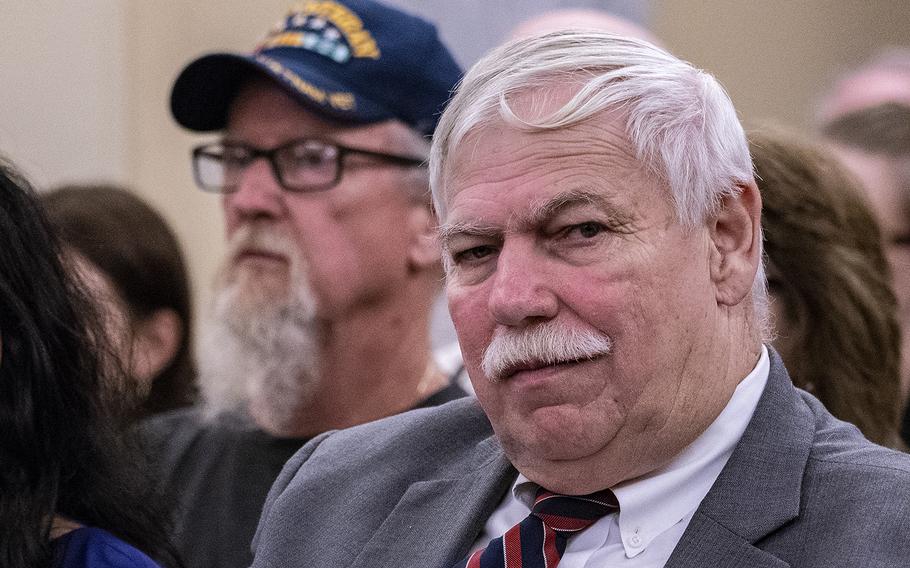 Buy Photo
Retired Cmdr. John Wells, executive director of the Military Veterans Advocacy, Inc., listens to testimony on Wednesday, Aug. 1, 2018, during a Senate Veterans Affairs Committee hearing on Capitol Hill in Washington. "We're disappointed in the testimony of the undersecretary," Wells said after the hearing. (Carlos Bongioanni/Stars and Stripes) 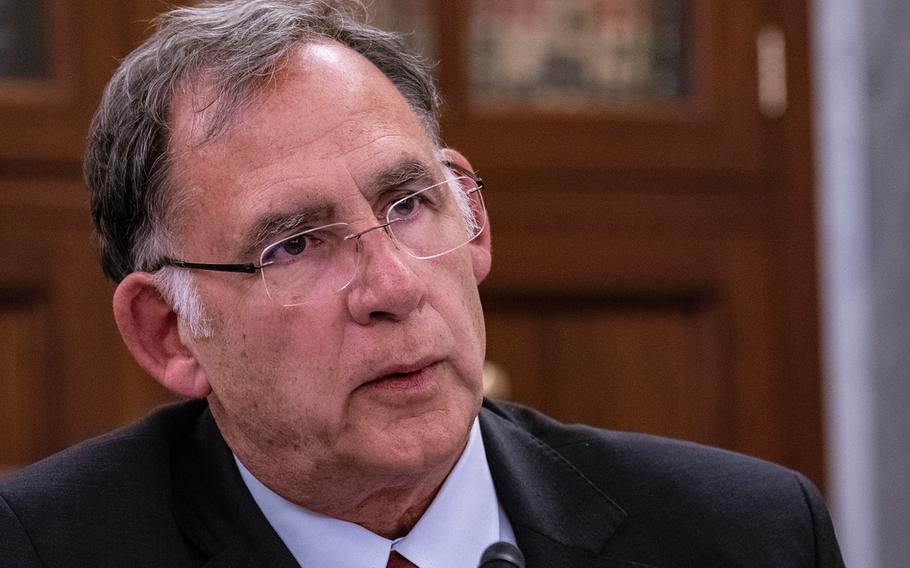 Buy Photo
Sen. John Boozman, R-Ark., speaks Wednesday, Aug. 1, 2018, during a Senate Veterans Affairs Committee hearing on Capitol Hill in Washington. Boozeman expressed support of a bill that would recognize Blue Water sailors of the Vietnam War era as possible victims of Agent Orange exposure. "This is an important piece of legislation that will allow many deserving veterans to receive care and benefits they've long sought," he said. (Carlos Bongioanni/Stars and Stripes) 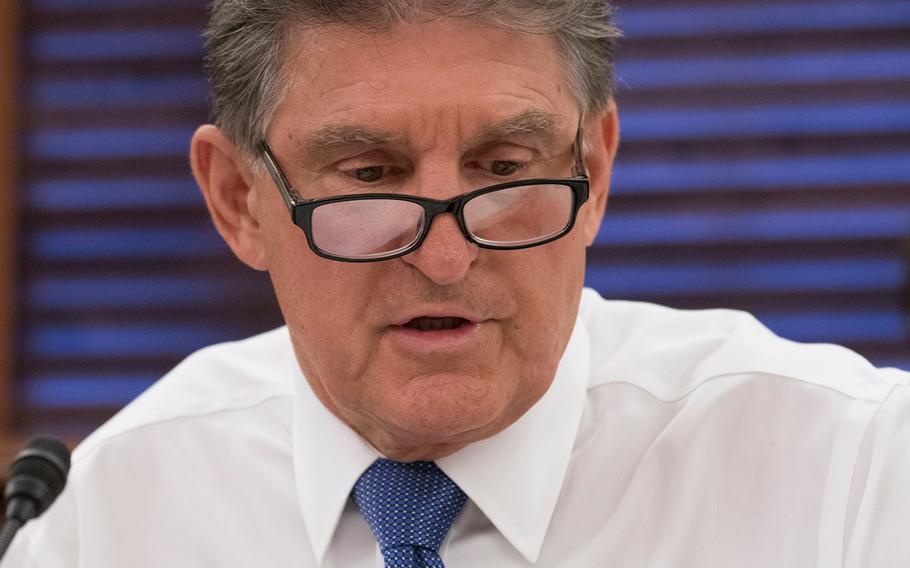 Buy Photo
Sen. Joe Manchin; D-W.Va. addresses witnesses on Aug. 1, 2018, during a Senate Veterans Affairs Committee hearing on Capitol Hill in Washington. "We shouldn't even be here talking about this." Manchin said of the hearing into legislation concerning Blue Water sailors who may have been affected by Agent Orange during the Vietnam War. "I don't think they're asking for much. If you're exposed; you're exposed." (Carlos Bongioanni/Stars and Stripes)

WASHINGTON — Department of Veterans Affairs officials urged senators Wednesday to vote against legislation that would extend VA benefits to sailors who served off the coast during the Vietnam War and claim their illnesses were caused by exposure to Agent Orange.

“We oppose this bill because the science is not there, and we depend on science,” he said. “We care, so we keep looking.”

The bill would set a bad precedence for approving benefits for illnesses without proof that they were caused by military service, Lawrence argued. He worried the move would “erode confidence in the soundness and fairness of the veterans benefits system.”

The bill that the committee considered Wednesday would make disability compensation available to approximately 90,000 “Blue Water” Navy veterans — those sailors aboard aircraft carriers, cruisers, destroyers and other ships who contend they were exposed to Agent Orange through the ships’ water systems. The dioxin-laden herbicide has been found to cause respiratory cancers, Parkinson’s disease and heart disease, as well as other conditions.

Former VA Secretary David Shulkin previously spoke out in support of the bill, saying “we have to do the right thing” even with lacking evidence.

“We were disappointed to see the reversal in the VA’s position,” said retired Navy officer John Wells, who’s been advocating for the bill for years. Wells said he plans to talk with new VA Secretary Robert Wilkie about the issue.

“We’re disappointed in the testimony of the undersecretary. We hope the Senate moves fast to pass this bill,” Wells said.

The House unanimously approved the bill in June with a vote of 382-0. It’s the furthest the measure has progressed in Congress after being introduced in 2011, 2013 and 2015.

Instead of taking the bill directly to the Senate floor, Sen. Johnny Isakson, R-Ga., scheduled the hearing Wednesday to hear from veterans service organizations and the VA. Veterans filled the committee room Wednesday afternoon, as more of them stood in line outside, waiting for a seat.

Besides the lack of funding, Lawrence argued the legislation would lead to an increased volume in veterans’ claims for benefits, which would grow the claims backlog unless more employees were hired to work on them. He said the VA would need an estimated $500 million during the next 10 years to boost their resources to handle the claims.

Then, there was the cost of the benefits themselves.

Extending the benefits for 10 years would cost $1.1 billion, according to estimates from the Congressional Budget Office. To make up the cost, the legislation raises fees for servicemembers and veterans who use the VA’s home loan program. The increase amounts to between $2.14 and $2.95 each month.

“Granting new benefits for some veterans at the expense of other veterans is counter to VA’s mission,” Lawrence said.

Despite the VA’s concerns, the senators who spoke about the bill Wednesday were mostly supportive.

“This is an important piece of legislation that will allow many deserving veterans to receive care and benefits they’ve long sought,” said Sen. John Boozman, R-Ark.

Sen. Joe Manchin, D-W.Va., said he thought the bill would get easy support if allowed on the Senate floor for a vote.

“We shouldn’t even be here talking about this,” Manchin said. “I don’t think they’re asking for much. If you’re exposed, you’re exposed.”

It was uncertain Wednesday when the committee might vote on whether to advance the bill to the full Senate. Senators were expected to leave at the end of the week for a short August recess.

Other bills that the committee discussed Wednesday were:

• The VA Hiring Enhancement Act aims to fill vacancies and improve the recruitment and retention of VA physicians by allowing the agency to make job offers up to two years before doctors finish their residencies.

• S 3184 allows more nonveteran spouses to live in state-run veteran homes. Under current law, if more than 25 percent of a home’s residents are not veterans, the home loses federal funding and certification. The bill would increase the amount to 40 percent.

• The Veterans Affairs Medical-Surgical Purchasing Stabilization Act requires the VA to use multiple vendors for its medical supplies. It would also mandate the employees who purchase supplies have medical expertise with them.

• The BRAVE Act of 2017 increases the amount the VA pays for burial and funeral expenses each year to match the percent increase in the Consumer Price Index.

• A bill to transfer management of the dilapidated Mare Island Naval Cemetery from the city of Vallejo, Calif., to the VA to be maintained as a national shrine.

• Legislation to increase the amount the VA will pay for dependency and indemnity compensation by about $300 each month. The payments go to survivors of veterans whose deaths resulted from a service-connected injury or disease.

• A bill to extend the special pension for deceased Medal of Honor recipients to their surviving spouses.

• A draft bill to improve counseling and other services for transitioning servicemembers starting one year before their date of separation.

• Legislation that would establish a VA grant program for people who provide suicide prevention services to veterans and their families.

• A bill to creating a one-year pilot program at the VA to provide devices veterans could use to share their medical histories with VA and community health care providers.