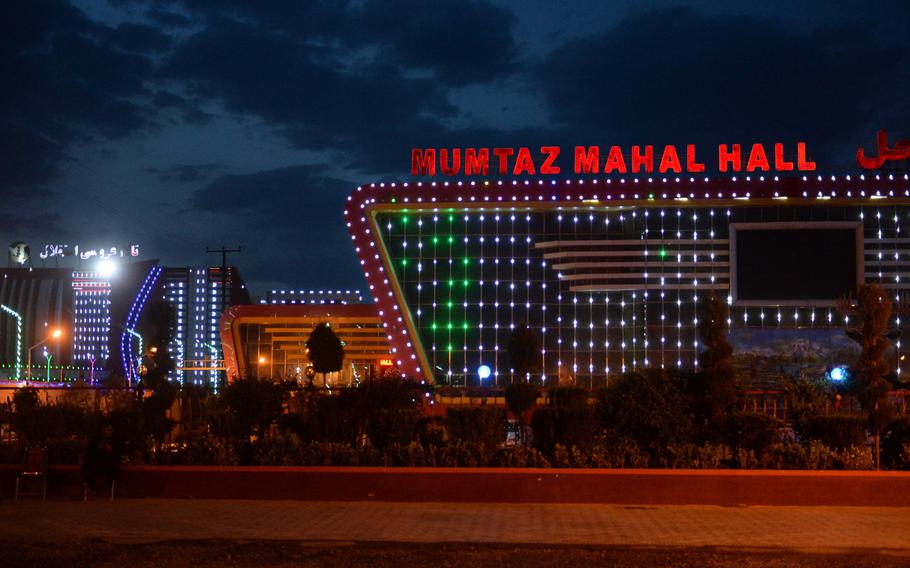 Buy Photo
Mumtaz Mahal Hall turns on its lights on Tuesday, April 18, 2017. It is one of approximately 140 wedding halls that illuminate the Kabul skyline. (Phillip Walter Wellman/Stars and Stripes) 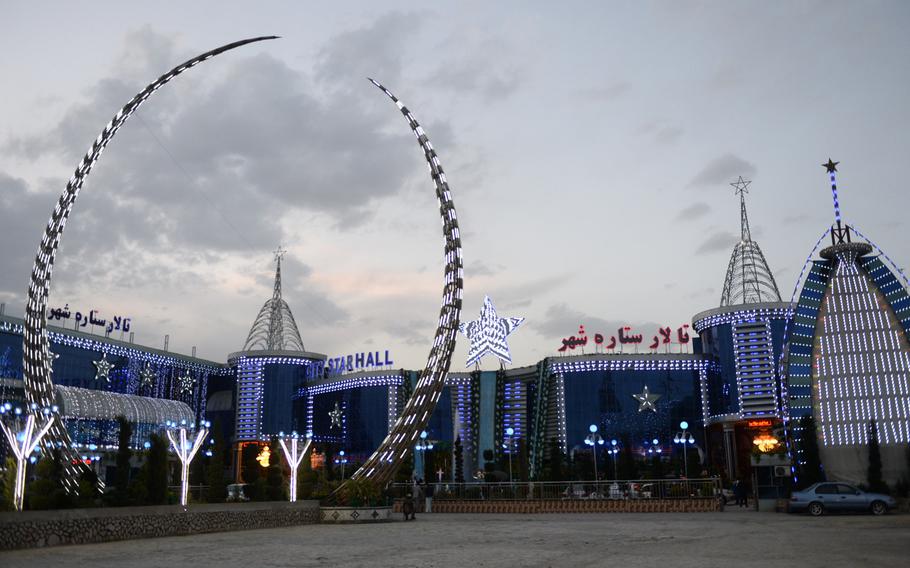 Buy Photo
Exterior lights of the City Star Hall in Kabul, Afghanistan, are turned on at dusk, a few hours before a wedding ceremony on Tuesday, April 18, 2017. (Phillip Walter Wellman/Stars and Stripes) 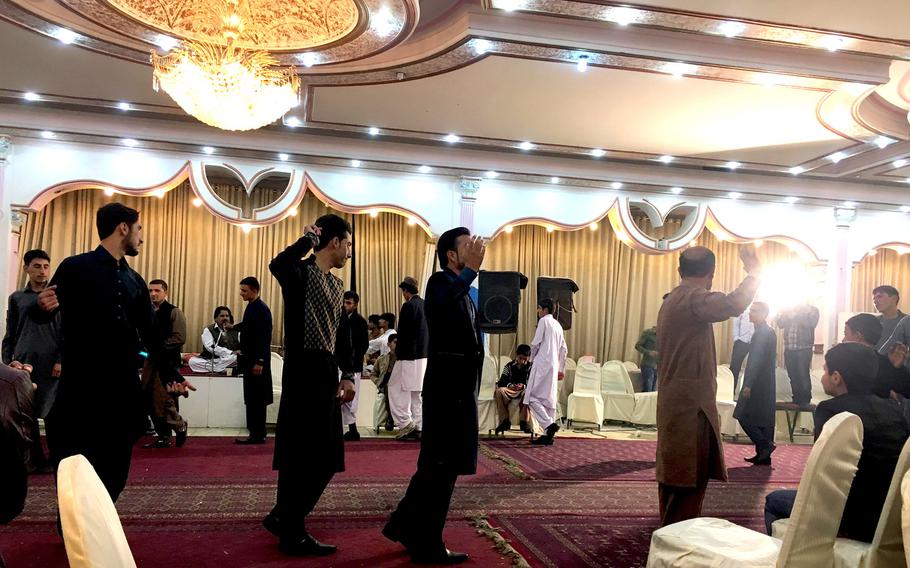 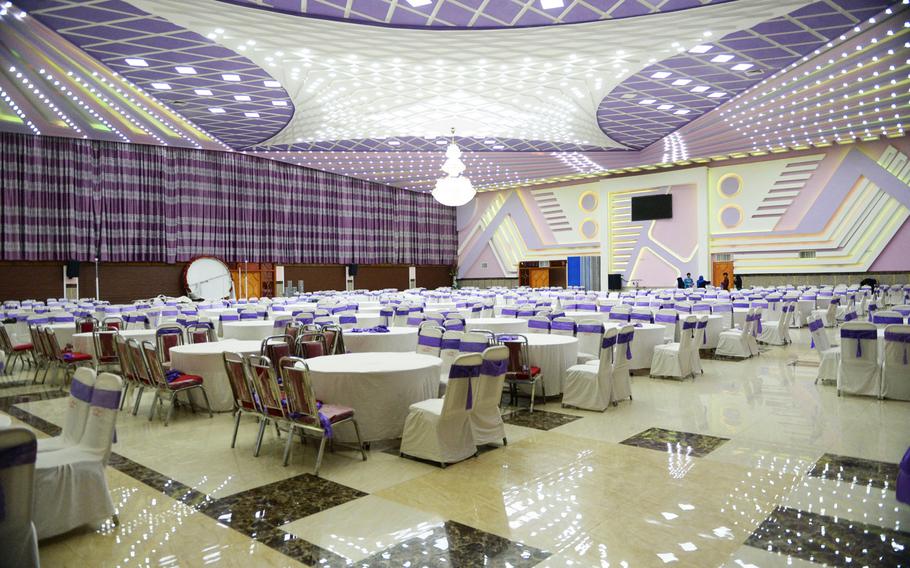 Buy Photo
Moula Mohammad Paiman, who heads the Kabul Wedding Halls Union, sits in the office of the City Star Hall, which he co-owns, on Tuesday, April 18, 2017. (Phillip Walter Wellman/Stars and Stripes) 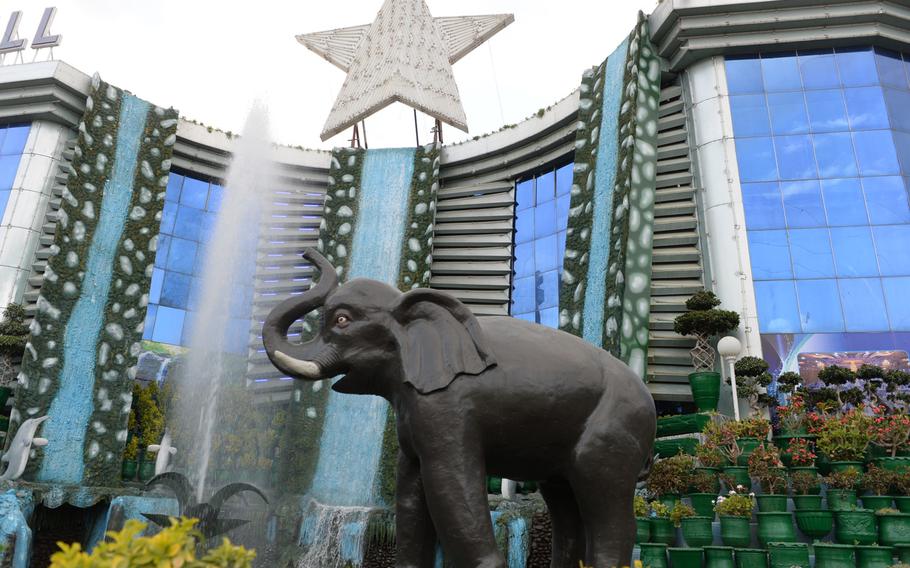 Buy Photo
Decorations, such as a large statue of an elephant, adorn the City Star Hall in Kabul, Afghanistan, on Tuesday, April 18, 2017. The hall is made up of four separate halls and can accommodate thousands of guests per night. (Phillip Walter Wellman/Stars and Stripes) 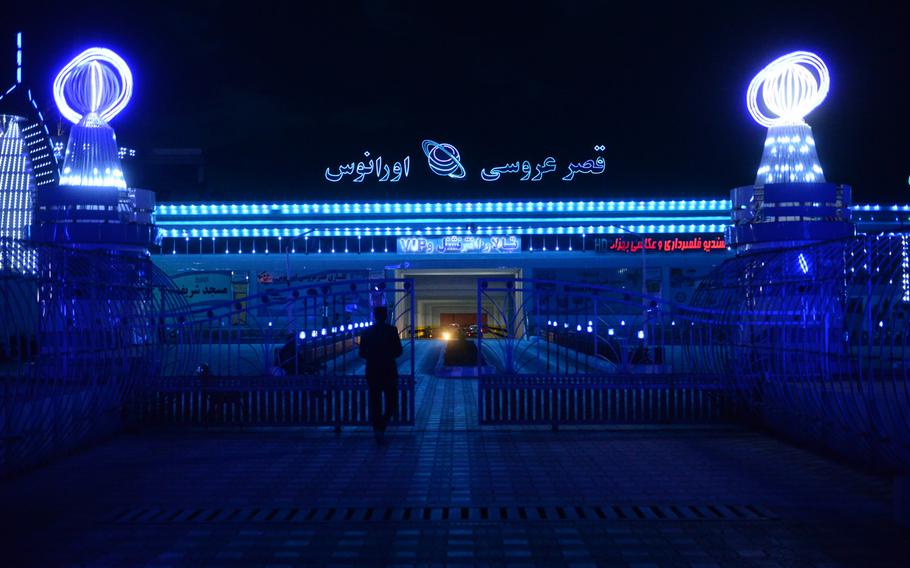 Buy Photo
The Uranus Wedding Hall is shown on Tuesday, April 18, 2017, in this file photo. (Phillip Walter Wellman/Stars and Stripes) 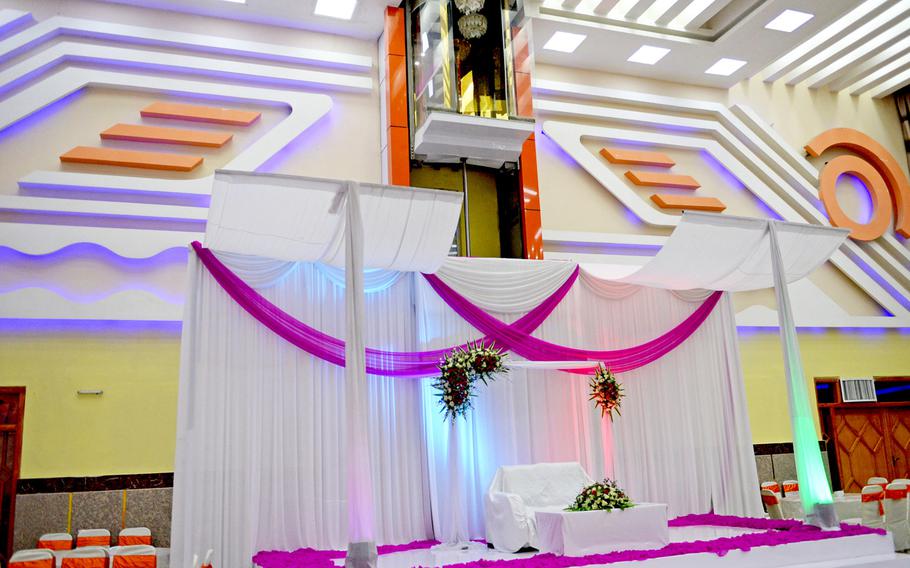 Buy Photo
Newlyweds at Atlantis Wedding Hall in Kabul descend in an elevator together on April 5, 2017. (Phillip Walter Wellman/Stars and Stripes) 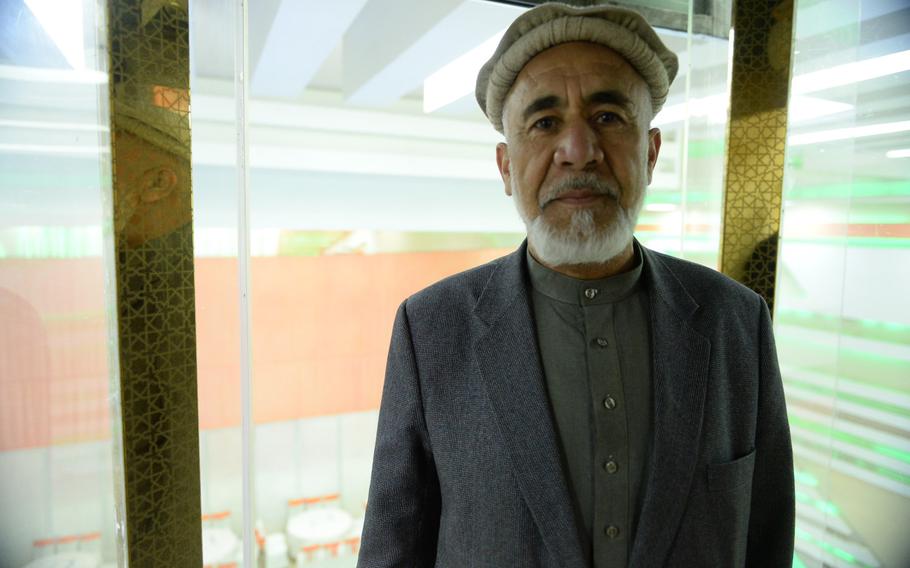 Buy Photo
Alhaj Mohammad Shoaib Niazi, co-owner of Atlantis Wedding Hall in Kabul, Afghanistan, stands inside an elevator at the hall, April 5, 2017. Newlyweds descend in the elevator during their wedding ceremonies. (Phillip Walter Wellman/Stars and Stripes) 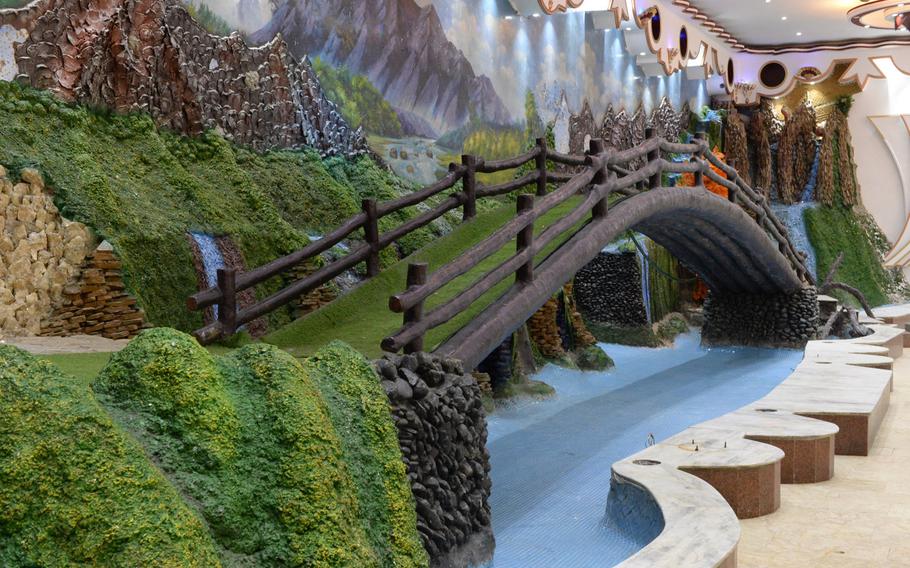 Buy Photo
A small, man-made river runs through one of four large halls that make up the City Star Hall in Kabul, Afghanistan, Tuesday, April 18, 2017. Newlyweds walk over the bridge. (Phillip Walter Wellman/Stars and Stripes) 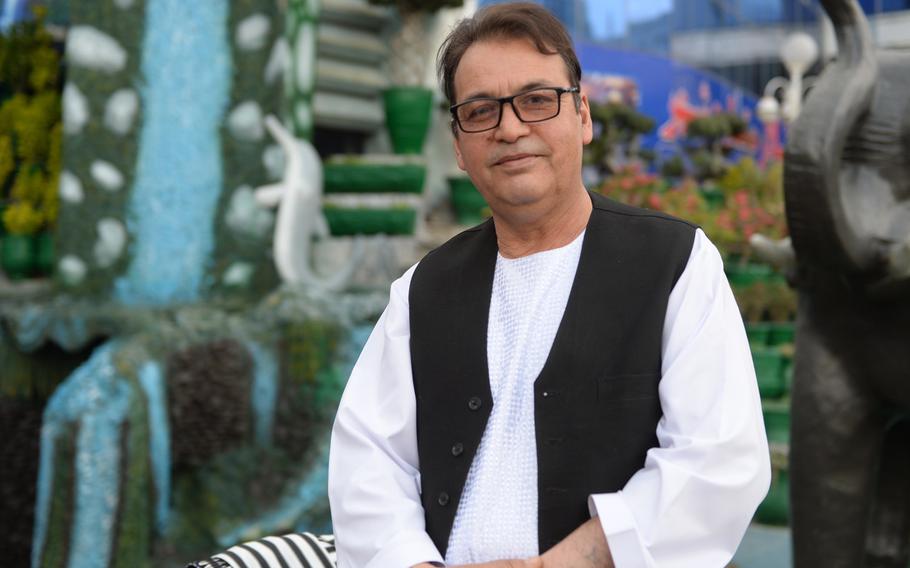 Buy Photo
Ahmad Farid Ashufta stands in front of City Star Hall in Afghanistan on Tuesday, April 18, 2017. He traveled to the hall from Balkh province in northern Afghanistan to attend his nephew's wedding. (Phillip Walter Wellman/Stars and Stripes)

KABUL, Afghanistan — “I’ve always wondered what all those flashing lights are down there,” an American servicemember said recently on a nighttime helicopter flight out of Kabul.

Each evening at sunset, huge buildings light up and bring the Afghan capital to life. The sight often puzzles international troops, who are usually confined to tightly secured bases and see the city only from above.

“They look like Vegas casinos,” the servicemember remarked. But the buildings are in fact giant wedding halls.

The structures are perhaps the most noticeable change to the landscapes of Kabul and other major Afghan cities since the U.S.’s 2001 invasion that removed the Taliban from power.

When the militants ruled the country from 1996 to 2001, music and dancing — essential parts of weddings at the modern-day halls — were outlawed, and most people were married at home.

But the influx of foreign forces, and the boost it gave to the local economy, helped build an industry centered on the biggest events on Afghans’ social calendars. Today, there are roughly 140 wedding halls in Kabul, and they constantly compete to outdo one another with novelty attractions both inside and outside their walls — from light shows to water fountains to large statues of animals.

“Owners of every hall want to provide good services and luxury,” said Alhaj Mohammad Shoaib Niazi, a co-owner of Atlantis Wedding Hall, whose latest attraction is an elevator that takes brides and grooms down to a stage where they carry out traditional wedding customs.

“We put a lot of focus on the latest technology, imported furniture, tiles, catering equipment and lighting,” Niazi said, adding that he and the other owners invested $3.5 million in the site.

Afghan weddings are usually big affairs, often with thousands of guests, including relatives, friends and fellow tribesmen. And they’re frequent. In Kabul, it’s not uncommon for someone to attend a half-dozen weddings each year. At most weddings, men and women are split up and celebrate in separate spaces.

Moula Mohammad Paiman, who heads the Kabul Wedding Halls Union, says roughly 90 percent of weddings in the capital are celebrated in the halls, which makes them extremely important to the city’s economy and to residents’ livelihood. Some 100,000 people in Kabul have jobs linked to the wedding industry, said Paiman, who is co-owner of the massive City Star Hall.

Besides getting a decent wage, employees are allowed to take leftover food to their families. Paiman said hundreds of thousands of people in the city regularly get free meals because of the wedding hall industry.

“This is the greatest job,” said Aziz, 18, who works at the Atlantis Wedding Hall and, like many Afghans, uses only one name. “It feels like you are working at home and at the same time I’m supporting my family.”

In a country whose economy has been floundering since international forces ended combat operations in December 2014, the jobs and incentives provided by the wedding industry are important.

Since the drawdown, an international force of 12,600 remains in Afghanistan; 8,400 of these are American. Most U.S. troops assist with NATO’s assistance mission, while about 2,500 are special forces who carry out a separate counterterrorism mission.

Having taken a big hit two years ago, the Afghan wedding industry appears to be improving.

“When international forces announced their withdrawal in 2014, the business went rapidly down, but after the new Afghan government, hopes are back and business is slightly increasing,” said Paiman, head of the wedding owners’ organization.

“It’s hard to celebrate weddings at home with so many people, and it’s great to see all these big halls that can fit thousands,” he said in front of a giant waterfall and a large statue of an elephant. “I’m happy to see these big changes in Kabul.”