Rematches galore as top teams square off in semis 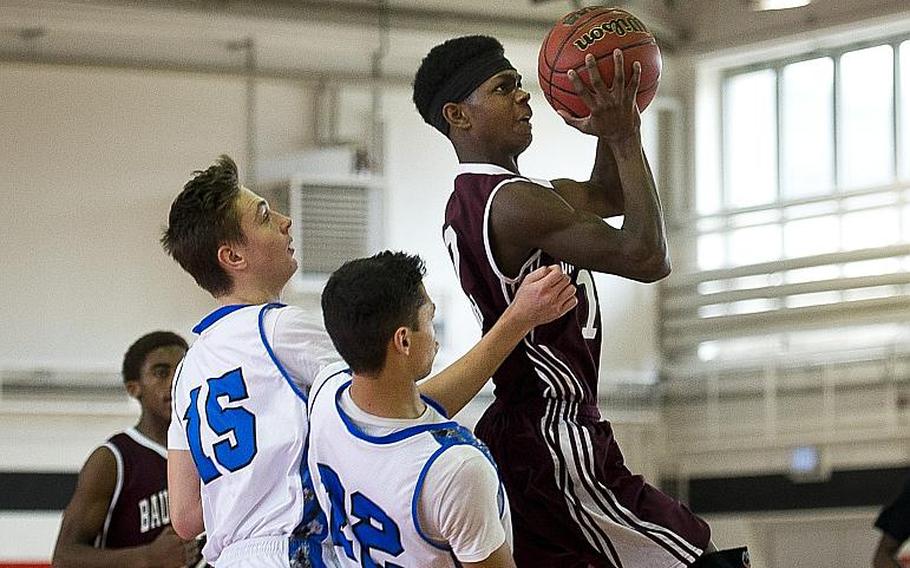 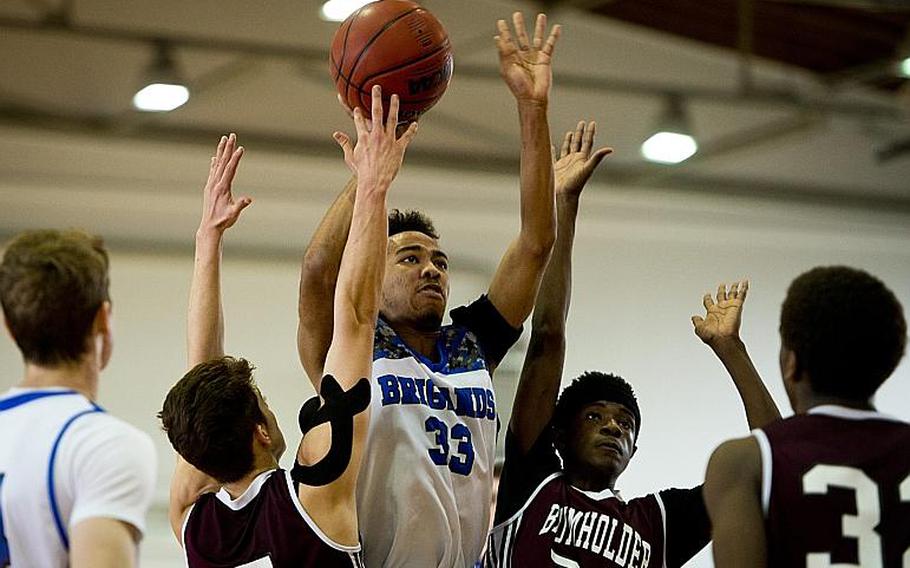 Brussels' Paul Hubbard goes up for a shot over Baumholder's Daryon Jones, right, and Lester Jungbluth during the DODEA-Europe basketball championships in Sembach, Germany, on Thursday, Feb. 23, 2017. Brussels lost the Division III game 42-32. (Michael B. Keller/Stars and Stripes) 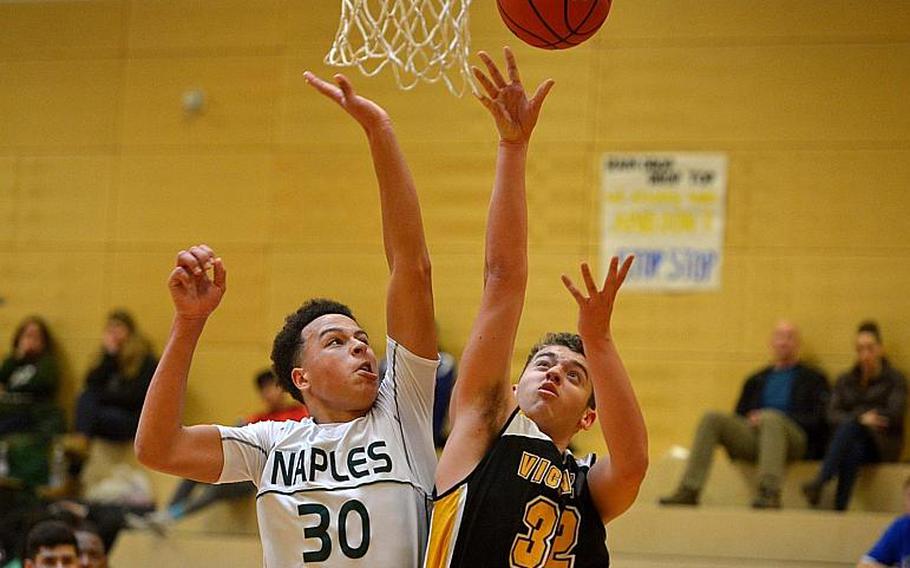 Naples' KC Evans tries to block a shot by Vicenza's Eric Luster in game at the DODEA-Europe basketball finals in Wiesbaden, Thursday Feb. 23, 2017. Naples won the Division I game 52-43. (Michael Abrams/Stars and Stripes) 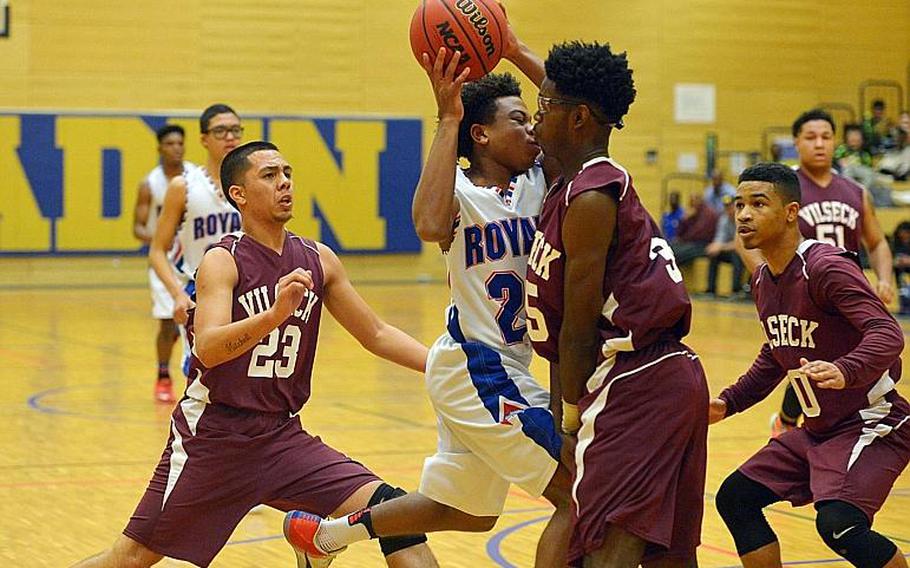 Ramstein's Miles Ponder runs into Vilseck's Kenya Pickney as he drives to the basket in a Division I game at the DODEA-Europe basketball finals in Wiesbaden, Thursday Feb. 23, 2017. Pickney was called for a foul as teammates Chrystian Mitchell, left, and Desean Morgan, right, watch. Ramstein won the game 50-35. (Michael Abrams/Stars and Stripes) 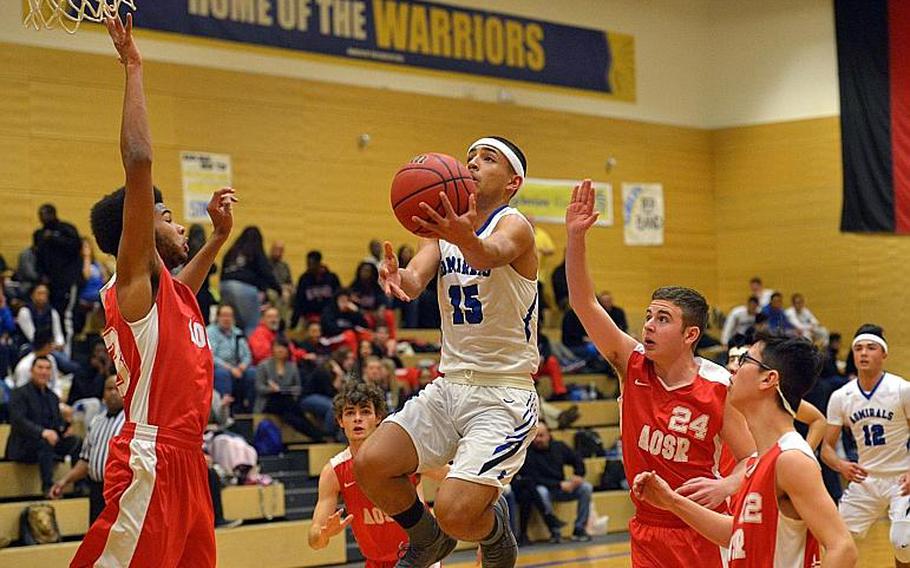 The semifinals are set, and they look a lot like they were expected to look.

The top seed Wiesbaden Warriors and defending champion Ramstein Royals stepped confidently into the Division I elimination round with wins Thursday. The Warriors will face Naples, while the Royals will face Kaiserslautern in a championship rematch.

In Division II, the Rota Admirals and Black Forest Academy Falcons are a win away from a title game rematch. The defending champion and top-seeded Admirals take on Aviano, while the second-seeded Falcons will face Bahrain.

The Division II semifinals run consecutively starting at 1 p.m. at Wiesbaden’s Clay Kaserne Fitness Center; the first of the two Division I semifinals start at 7 p.m. at Clay.

The four-day tournament concludes Saturday with a slate of six boys and girls European championship games starting at 11:45 a.m.

Division INaples 52, Vicenza 43: The third-seeded Wildcats advanced to the Division I final four by knocking off their most familiar rival.

Though Division I opponents don’t see much of Naples during the regular season, there’s no mystery about what the Wildcats bring to the tournament.

Naples features arguably the best two-man duo in Division I in dynamic guard Terrell Staten and gifted 6-foot-4 big man KC Evans. That senior pair has been terrorizing defenders from all corners of the vast Continent since ninth grade.

“We’ve been playing together four years strong,” Evans said. “Chemistry is all we’ve got.”

“I get him open shots and he gets me open shots,” Evans said. “That’s how we play off of each other.”

With their final game fast approaching, Evans and Staten are feeling the urgency to cement their shared legacy.

Ramstein, which split a pair of games with Vilseck in the first week of the regular season, was never seriously challenged in pool play. The Royals won their three preliminary games by a combined 70 points. That included a 34-31 victory over Naples that determined the top seed in the pool.

Kaiserslautern 56, SHAPE 37: The Raiders seized the day’s last semifinal spot with an emphatic defeat of the Spartans.

The game was a de facto quarterfinal, with its winner advancing to the semifinal round and its loser heading home.

The Spartans ended on the short end of that situation, a major letdown of the team’s dramatic win over Stuttgart on Wednesday.

Kaiserslautern, meanwhile, again found its way into the final four despite a subpar regular season. The eighth-seeded Raiders have already matched their regular-season total of two Division I wins in this tournament and now are a win away from their third straight appearance in the European title game.

Division IIRota 47, AOSR 32: The Admirals cruised into the semifinals with their third double-digit victory in as many games.

While those margins suggest that the wins have come easily this week, the Admirals’ success has been hard-won. This Rota team is vastly different than the explosive group that blasted BFA in last year’s title game.

That 2016 championship roster was loaded with enough knockdown shooters to eventually outgun any opponent, but this year’s squad doesn’t boast quite that level of firepower. The current Rota outfit situates its offense around the inside-out combination of center Andy Drake and point guard Jashaun Garrison, challenging the rest of the team’s contributors to stretch their games and expand their roles.

“I’ve had to develop my dribbling and scoring ability,” senior Jake Anderson said, adding that the team has also ratcheted up its defensive intensity this season. “A lot of the players on the bench have had to step up this year.”

While the offensive process may not be quite as smooth as last year’s blur of lane penetration, pinball passes and open three-pointers, the Admirals still trust it.

“We just let the game come to us,” Anderson said. “Just look for an opportunity to score.”

Bahrain 64, AFNORTH 49: Fourth-seeded Bahrain recovered from its Wednesday loss to Rota to preserve the possibility of a rematch.

Bahrain overcame a four-point halftime deficit with a huge second-half rally to secure the runaway win in its only game of the day.

Black Forest 58, Aviano 18: The Falcons stalled the Saints’ momentum with overwhelming force, though both teams advanced to the semifinals regardless.

Sixth seed Aviano entered the game riding high after gritty first-day defeats of Marymount and Bitburg. But the Saints were outclassed immediately by the second-seeded Falcons, who had already built a prohibitive lead and largely turned things over to their reserves by the second quarter.

BFA landed a final cannonball in its pool later Thursday with a 74-51 rout of Marymount.

Division IIIBaumholder 42, Brussels 32: The Bucs continued their dominant season with a double-digit win over the defending champs.

Though they’re only halfway to their goal, the Bucs have been at the top of their game this week.

The idea of an improved Bucs team should be terrifying for the remainder of the small-school field. Baumholder lost just one regular-season game, a 32-25 setback to Ansbach on Feb. 10, and immediately avenged it with a 32-28 defeat of the Cougars the next day. Now, Fleming said the Bucs’ confidence is not just restored but “definitely boosted” by their postseason start.

“We’ve beaten these guys,” Fleming said of the field’s other five entries. “We should be able to beat them again.”

The Cougars kept up Thursday with a 59-34 win over Alconbury and a 33-32 overtime defeat of Hohenfels. The Bucs and Cougars face off Friday morning in a round-robin game that might double as a title-game preview. Sigonella might have something to say about that, though. The Jaguars edged Baumholder 44-43 in the final game of the night.