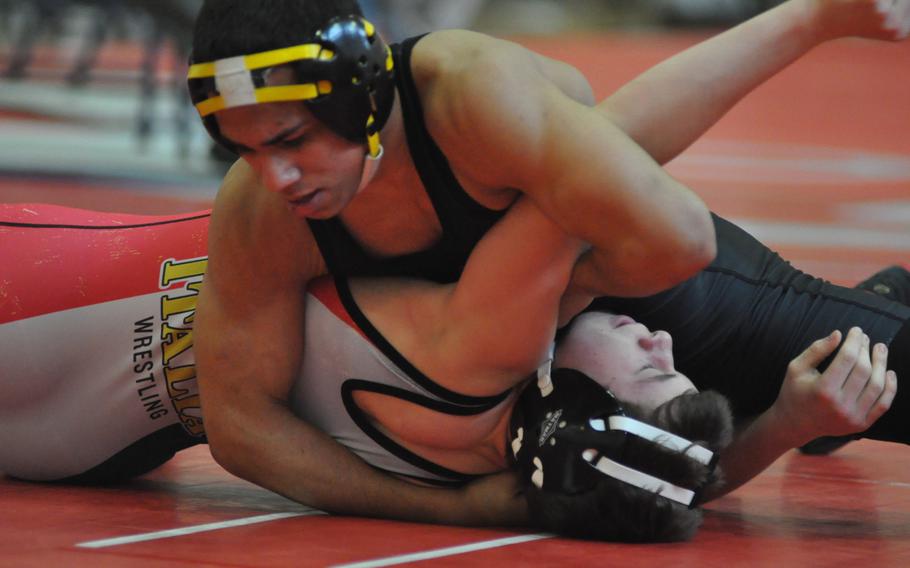 Vicenza's Josh Badilllo puts Naples' Liam Sheffield to his back in a 130-pound match Saturday, Feb. 11, 2017, at the Southern section. Badillo took first at the tournament. (Kent Harris/Stars and Stripes) 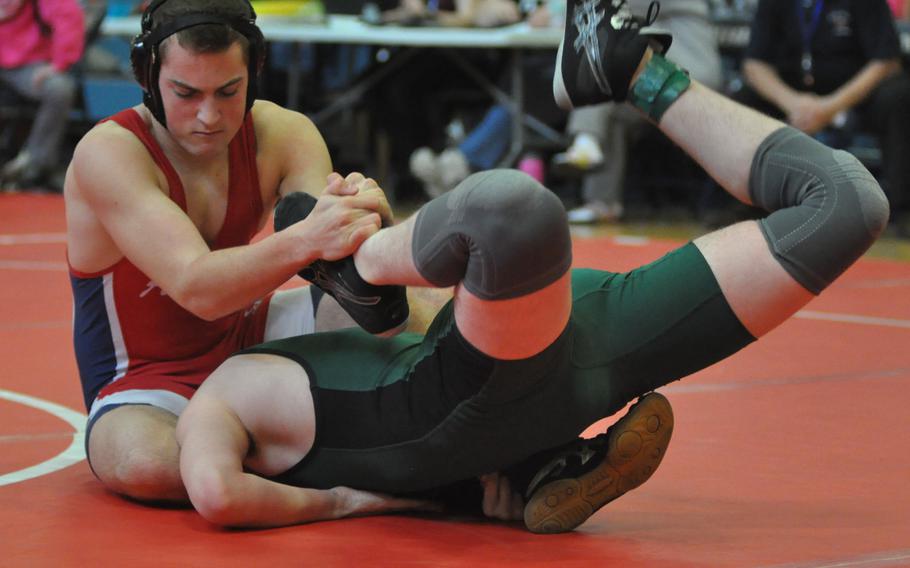 Aviano's Andrew North was up 9-2 on Naples' Michael Urselll before getting pinned Saturday, Feb. 11, 2017. Neither earned an automatic spot in next week's European championships. (Kent Harris/Stars and Stripes) 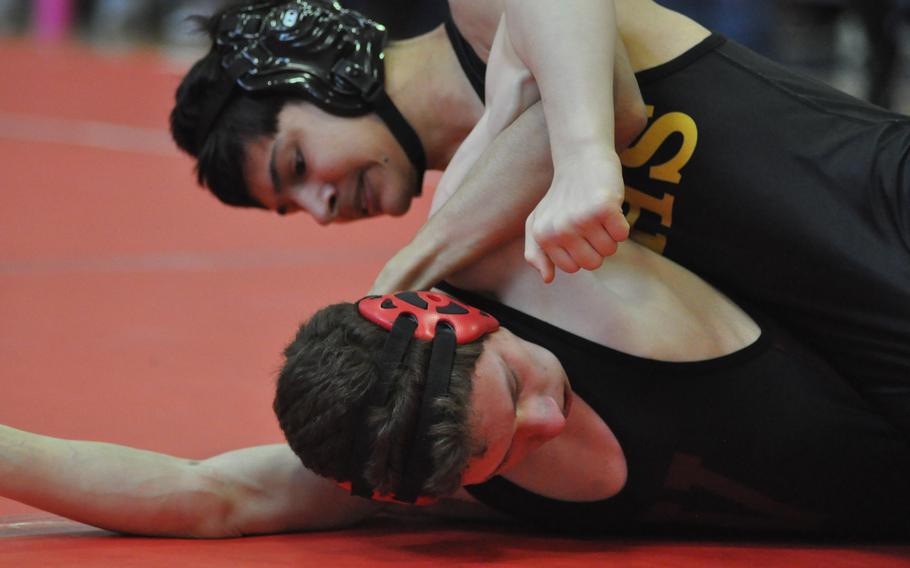 Vicenza's Tristan Valdez has control of Vilseck's Blaise Markely briefly in a 120-pound match on Saturday, Feb. 11, 2017. But Markley eventually prevailed 17-12. Both advanced to the European championships. (Kent Harris/Stars and Stripes) 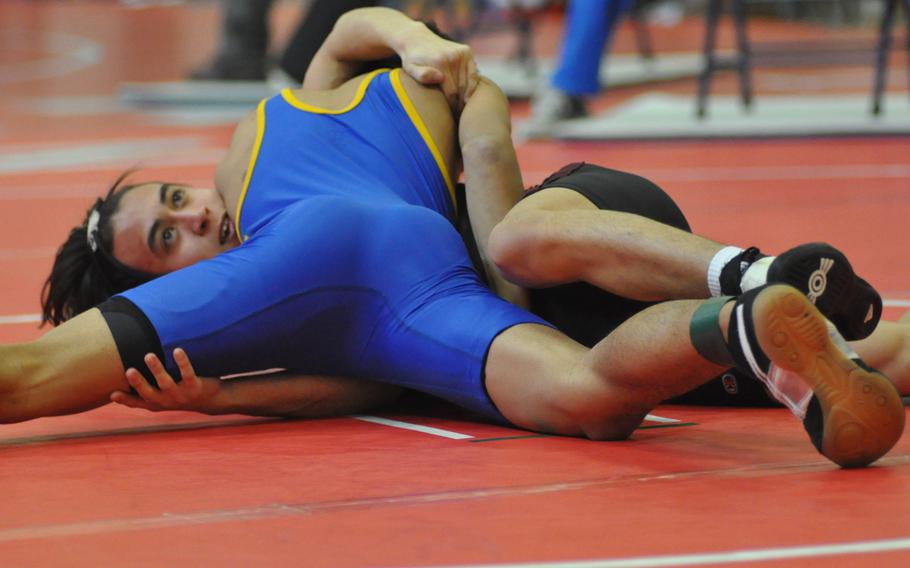 Sigonella's John Miayamoto defeated Vilseck's Diego Martinez at 113 pounds on the way to qualifying with the Southern sectional's top seed on Saturday, Feb. 11, 2017, at Aviano Air Base, Italy. (Kent Harris/Stars and Stripes) 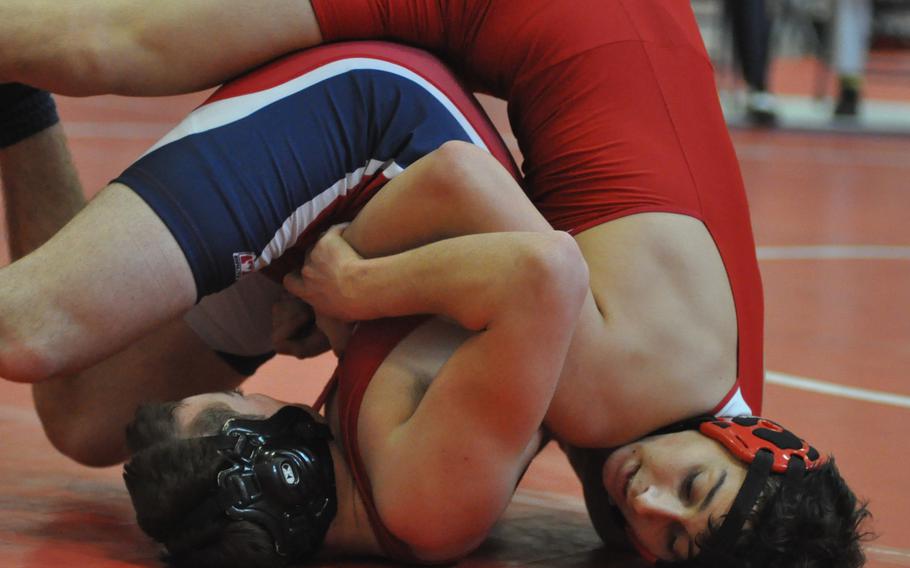 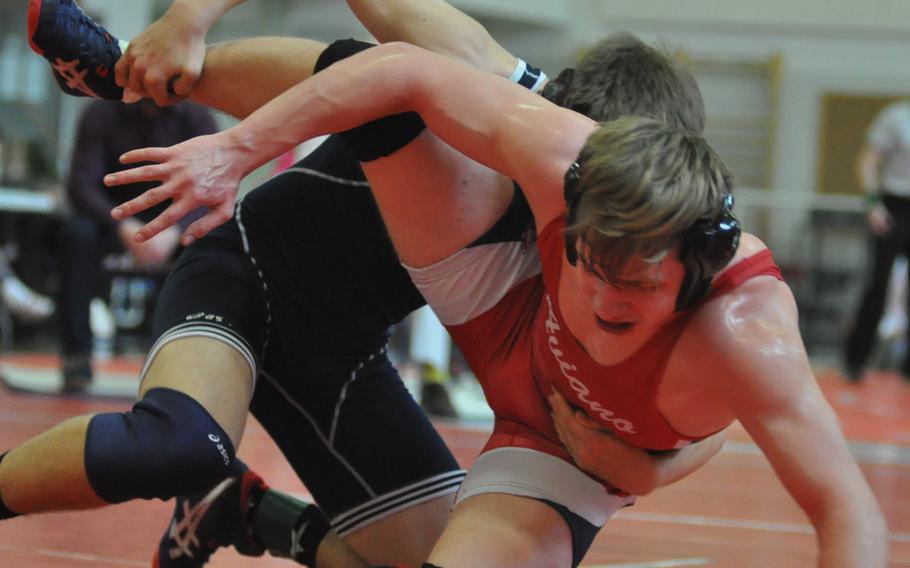 Munich's Drake Ronnau gets Aviano's Mitchel Schaul off balance in a 160-pound match Saturday, Feb. 11, 2017, at the Southern section tournament. Both advanced to the European finals. (Kent Harris/Stars and Stripes) 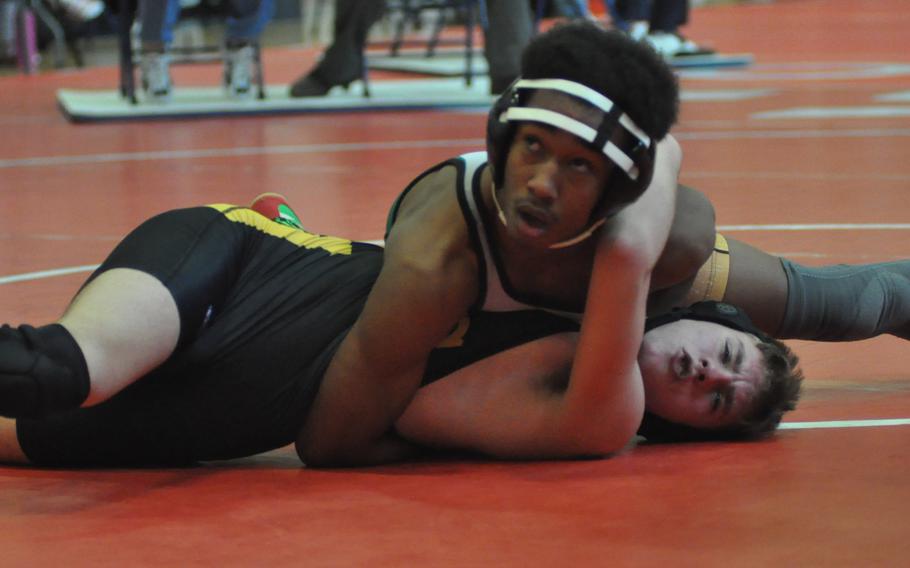 Naples' Andres Tavarez looks up from his 138-pound match with Vicenza's Trey Brock at the Southern sectional on Saturday, Feb. 11, 2017. (Kent Harris/Stars and Stripes) 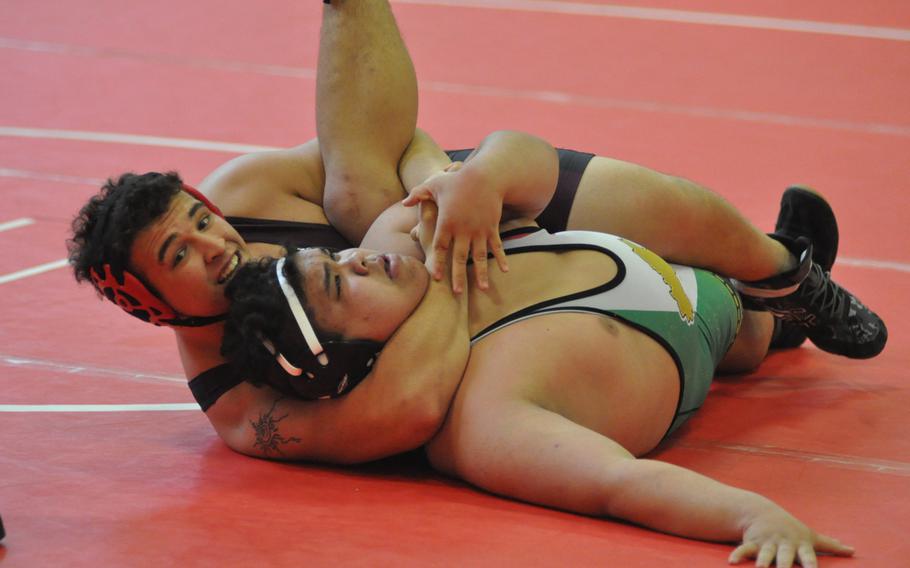 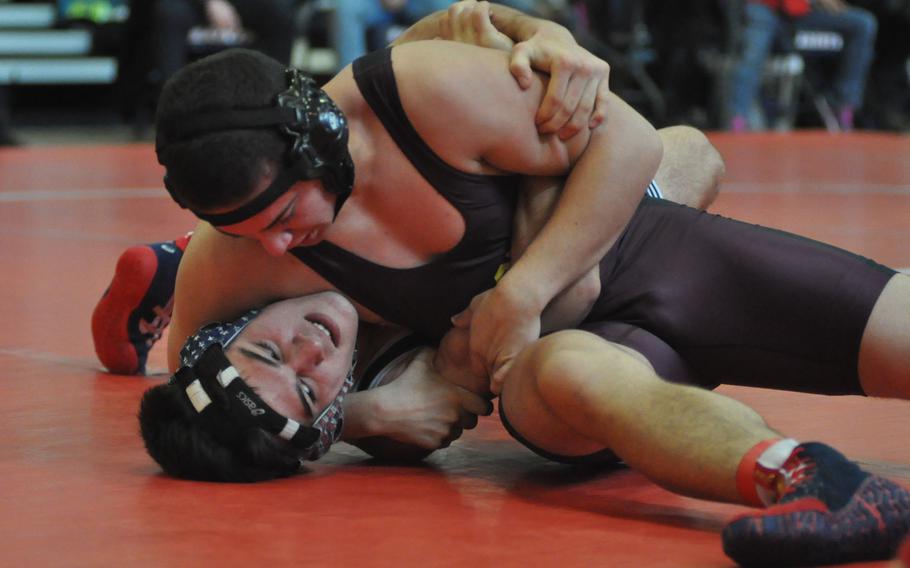 Vilseck's Kyle Frost has Munich International's Cole Ronnau at a disadvantage in a 170--pound match Saturday, Feb. 11, 2017. But Ronnau came back and won the match and both qualified for the European finals. (Kent Harris/Stars and Stripes)

AVIANO AIR BASE, Italy – Thanks to a trip south over the Alps earlier this season by Vilseck and Munich International, most of those facing off Saturday at the Southern sectional knew who – and what – they had to overcome to qualify for the European championships.

That didn’t always hold true, though. And it didn’t make it any easier in some other cases, adding in more than a good dose of the unexpected.

“That’s why we love sectionals,” Sigonella coach Edison Vega said. “You leave it all on the mat.”

One of Vega’s five wrestlers scored one of the bigger surprises. Freshman John Miayamoto wrestled at 120 pounds during the season, mostly because of a lack of competition at 113.

He dropped down to 113 for the sectional, though, and defeated both of his opponents to win the weight class.

“I had to drop a few pounds,” said Miayamoto, who hadn’t wrestled before this season. Now he’s hoping for a top-three finish next weekend at the European championships. “I’ve been told I pick things up quickly.”

Two other Jaguars will also travel to Germany. Two schools with even smaller contingents at Aviano did even better percentage-wise as far as placing wrestlers.

Munich International did that one better, with brothers Cole (160) and Drake (170) Ronnau both winning their weight classes. It wasn’t easy for either, though.

Cole Ronnau, looking to stay unbeaten during his senior season before hoping to walk on at the Air Force Academy squad next year, got a scare early on from Vilseck’s Kyle Frost.

The two each put each other’s backs briefly to the mat in the first round of their match while scrambling for control. Ronnau eventually went on to get the win by pin and later took first.

Vilseck brought the largest group of wrestlers at 17 and 11 of them received spots via automatic qualifying. Coach Jim Hall planned to submit a few more names as wild-card entrants.

Naples, despite not entering a wrestler in the first four weight classes, had a top-four finisher in every other one. That included 145-pounder Jackson Blevin (17-0) and 152-pounder Jordan Hoffman (25-0). Vicenza’s Josh Badillo (132) and Emil Aliyev (182) both had cases for being the most dominant wrestler at the qualifier as neither was really tested.

Aviano will likely be bringing more wrestlers than any other Division II program to the finals, after Jacob Gamboa (120), Liam Knowles (126) and Anthony Cervantes (138) took titles and four others finished in the top three.