On the rocks, with ice: Try Utah parks in the off-season 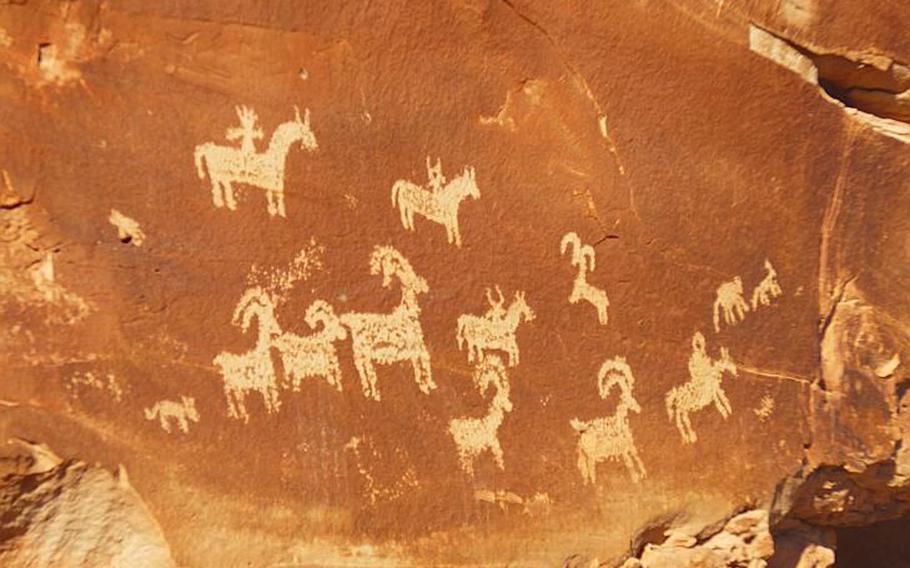 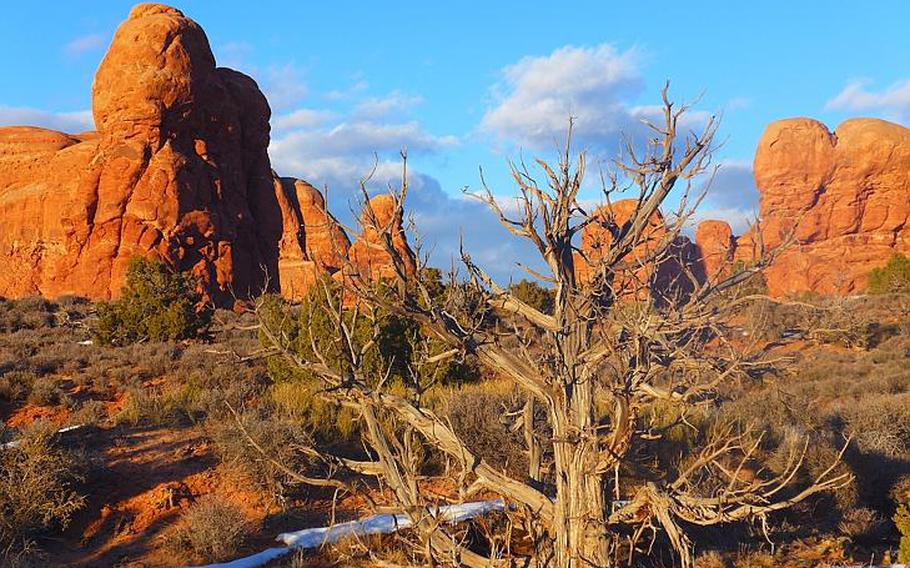 Arches National Park, near Moab, a city in eastern Utah, has more than 2,000 natural arches - the greatest concentration in the world. Photo by Elizabeth Zach for The Washington Post ()

Among the many photos I have from a recent vacation to Utah, one shows me at Canyonlands National Park, cupping my hands around my eyes and peering into the Island in the Sky Visitor Center. It was closed for the winter, and I was forlorn that I could not get a stamp in my National Parks passbook, an obsession born this year as the park service marks its centennial.

I say I was forlorn, and I was, but only partly: A winter visit to the dreamy deep-red caverns and arches that stretch across eastern Utah had been something of a gamble. My boyfriend, Reed, and I love hiking, but we knew that rough weather could easily ruin the vacation. What we found, however, is what travelers often do when they head someplace off-season: smaller crowds and cheaper airfare and accommodations. We flew into Salt Lake City, rented a car and drove to Moab, where we had rented a room for four days. Yet even in this popular town, within spitting distance of two national parks, we found mostly silence and, luckily, an intense blue sky that made the outsize and precipitous boulders and ravines even more mind-blowing.

Driving on from the shuttered visitor center, we debated which trail to hike, knowing we wanted to be at Grand View Point Overlook to watch the sun set. Rather spontaneously, we parked at the Shafer Canyon Overlook, crossed the road to the west with our hiking gear and descended amid the brush along the 5.5-mile Neck Spring Loop, which one of my guidebooks designates as the most secret trail in the park. We had prepared for chilly weather, with jackets, gloves, caps and heavy socks, so we were delighted to find sunny skies and temperatures in the 50s, a perfect day to be out there. With our gear, we were warm enough to take breaks along the trail to admire the views.

We had the place to ourselves as we skirted lush carpets of cryptobiotic soil and clusters of cedar and pinyon-juniper, along with patches of snow and even an abandoned hitching post, a reminder that cattle and horses had once grazed here. Then, as we approached a canyon, I saw a meager waterfall. We walked toward it, but came to an abrupt halt as we glimpsed an icy curtain woven around the base, giving off the surreal appearance of an earthen amphitheater. We carefully trod away from the trail, sidestepping the marsh and mud until we reached the icicles, and then we slipped behind them, looking out of our private cove toward the rest of the sunny ravine, a stellar view. After we had our fill, we turned back for the trailhead and then continued by car to Grand View.

It was shortly before sundown when we pulled up to the overlook, where, save for a friendly tourist from Montreal lugging around his enormous telephoto lens, we were alone, the solitude emphasized by the vast canyon below us. Driving back to the interstate, we watched the heavens morph into a warm rosy hue and could see silhouetted buttes off in the distance.

Back in Moab, we settled into the Hacienda restaurant on Main Street for a generous veggie burrito and an exceptionally tasty taco salad with ahi tuna. Afterward, back at the Gonzo Inn up the road, we performed what had, on this vacation, become our evening ritual, racing from our room through the frigid night air in our bathing suits for the Jacuzzi and gazing up at the stars. And, like every evening at the inn, we had the tub to ourselves.

The next day, after picking up chicken salad and drinks for a picnic lunch, we drove back toward Canyonlands but hung a left to Dead Horse Point State Park. Since planning this Utah vacation, I had been coming across aerial photos of a gooseneck turn in the Colorado River that weaves among striated cliffs. I thought it was at Canyonlands and looked for it when we drove to Grand View the previous evening, but afterward I realized that the image was from Dead Horse. I was eager to find it -- and did. The viewing platform and surrounding pathways were empty when we reached them and looked out onto parts of the canyons still flecked with snow. The Colorado resembled day-old coffee with cream. With the air hazy, the view to the bottom was striking, well worth the search for it.

Across the parking lot on the other edge of the canyon, we prepared our picnic while perched on rocks overlooking the La Sal Mountains. At the base of the canyons, we could see a glimmering series of ponds with what appeared to be railroads encircling them: the Moab Uranium Mill Tailings Remedial Action (UMTRA) Project, a U.S. Department of Energy effort to move 16 million tons of uranium tailings from the banks of the Colorado River to a permanent disposal site near Crescent Junction. But the project site appeared eerily still, almost abandoned, from where we sat.

Another day, we visited Arches National Park, which we found to be much busier than Canyonlands. American writer Edward Abbey was a park ranger here, and his journals from that time would become the book "Desert Solitaire," published in 1968 and eventually adopted as a bible for adventure travel to the area. It's hard to imagine that the collection of sculpted rock at Arches, which was designated a national monument in 1929 and elevated to park status in 1971, was initially promoted as a destination for tourists who didn't want to exit their automobiles. In fact, it's possible to glimpse the more than 2,000 catalogued arches -- the greatest concentration in the world -- doing just that.

But nowadays people get out in nature, and we still had fair weather. Before hiking, we stopped at the visitor center to see which trails were traversable. None were closed, but the rangers did point to ice and snow advisories. Reed, who had toured Arches before, especially wanted to see the iconic Delicate Arch, which he'd missed on his last visit. The rangers displayed photos of a seemingly treacherous path toward the end of the trail, but we were still game.

And it turned out that once we got to the parking lot there, so were plenty of other tourists. When we joined them, we encountered a veritable Tower of Babel -- we could pick out French, Ukrainian and Cantonese. Because about half the trail goes over broad, open rock faces, it didn't feel crowded until we reached the very narrow and icy stretch that rounds a bend and leads to the ridge where Delicate Arch is.

At one point along the trail, we took a slight detour to see petroglyphs depicting bighorn sheep and horseback riders, dating to when the Ute tribe -- for which Utah is named -- roamed the region. These aren't especially old; a sign said they were created between 1650 and 1850. However, they are well-preserved and protected and remain sacred to Native Americans in the area.

The trail from the petroglyphs onto Delicate Arch eventually winds through narrow rocky passages and over creeks, until the final cautious steps along a precipice that then opens onto a ridge. There, with the La Sal Mountains, pinnacles and balancing rocks off in the distance, the solo and soaring arch appears to teeter on the canyon's edge. It has been photographed so often and yet is no less arresting when you actually see it in person. We first stood on the distant ledge, taking in the spacious vista, and then slowly approached, posing for photos along the way.

Later, I looked up Abbey and his work and realized I was visiting Arches exactly 60 years since he had described this incandescent landscape. Abbey was deeply critical of what he called "industrial tourism" and was conflicted over our liaison with nature and specifically the desert and its indifference to humans. In this sense, my photos from eastern Utah now feel particularly valuable, for the grand views and solitude we were allowed -- and despite the missing stamp in my passbook.

Located off Moab's main drag, the inn offers standard rooms with king beds to suites, from $174 per night. Rooms are brightly but tastefully painted with variations of purple and green. There's also a pool, Jacuzzi and appealing gift shop.

With colorful, inviting decor and friendly staff, La Hacienda serves tasty and generous Mexican dishes. Entrees are $10-$15, and the portions are large.

This extensively stocked health-food store, open daily, is ideal for packing snacks and picnics before heading into the nearby parks. There's a good selection of produce and also a small soup bar.

What to doCanyonlands National Park

Island in the Sky Visitor Center, 33 miles from Moab on Utah State Route 313

The park offers hiking, biking, horseback riding, whitewater rafting and stargazing, among other activities. A separate entrance and visitor center to the south serves the Needles section of the park. Open year-round, $25 per car.

Many visitors drive the entire length of the park to see all the arches, but the mountain biking, hiking, canyoneering and rock climbing are top-notch, too. The hike to Delicate Arch is three miles round-trip and well marked. Open year-round, $25 per car.

The park offers hiking and biking and is well worth a picnic overlooking the canyons.