‘We got lucky a lot’ Then Chief Warrant Officer 3 Miguel Serrano poses with his Apache during one of his deployments to Afghanistan. (Couresty Miguel Serrano) 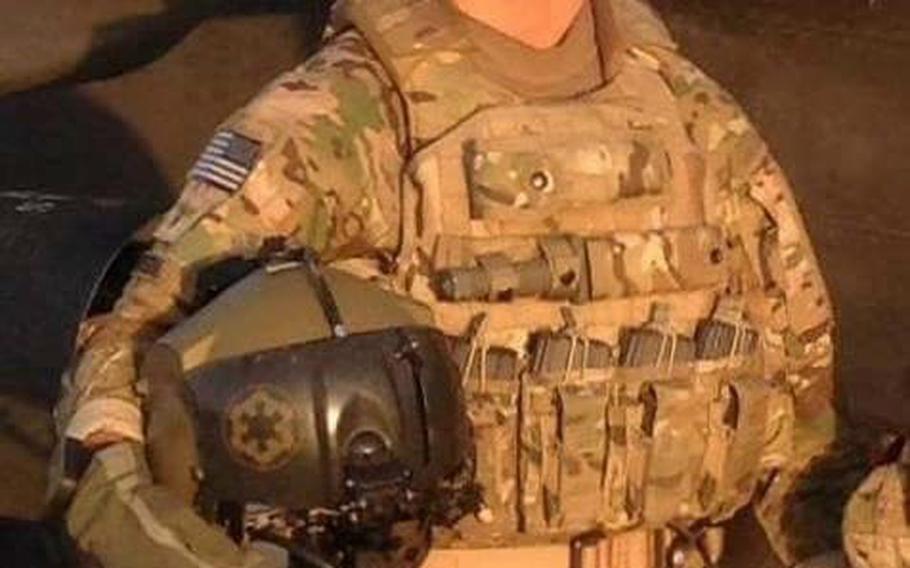 Chief Warrant Officer 2 Brian Gilbertson was one of four Apache pilots awarded the Air Medal with Valor for their actions in Afghanistan on July 10, 2014. (Courtesy Brian Gilbertson)

Some days, they led air assaults. Other days, they ran area security.

Their actions flying into a valley in Logar province in eastern Afghanistan saved the lives of the crews aboard those Chinooks and possibly others. For their efforts, the pilots were awarded the Air Medal with “V” device for valor.

Serrano, Gilbertson and Renzi were deployed in the summer of 2014 to provide air support in Regional Command-East in Afghanistan with the 159th Combat Aviation Brigade, 101st Airborne Division.

On July 10, four Chinooks were set to depart Forward Operating Base Shank in Logar province. They were supposed to land at another base, pick up ground forces and move them deeper into the war zone, southeast of the base.

The Chinooks were escorted by two Apaches, one operated by Serrano and Renzi and the other by Gilbertson and then-Capt. Joshua Caldwell. The Apaches were to act as a deterrent for insurgents who had recently become bolder about firing on Chinooks, which usually flew unescorted.

As mission commander for the flight and the senior pilot for the company, Serrano changed their mission for July 10. He decided the Apaches would trail the troop carriers. That way, they could identify enemy fire and target it. Serrano had the two Apaches trail 1 to 2 miles behind the Chinooks.

“If they want to shoot at a helicopter, let’s see if they shoot at us,” he said.

As the helicopters dipped into a valley, they were attacked from a village.

“As soon as we crested the portion of our ridgeline, instantaneously … I started seeing quite a bit of softball-size rounds … coming up,” Serrano said. “They were lighting them up pretty big time.”

The Chinooks radioed for assistance, returning fire with their M240 light machine guns. The Apache pilots moved to close the gap.

Once in range, the Apaches moved to draw the enemy fire.

“We are better equipped to handle that type of situation,” said Renzi, now a captain. “Our biggest concern at that point was to get those guys out of danger.”

The darkness helped for the night-vision equipped Apache crewmembers. It made it difficult to see exactly where the fire was coming from, but it also made the helicopters harder to hit.

“I have the target area off my nose and I’m closing the gap. All the sudden, off my left at 9 o’clock, I see a big flash,” Serrano said. “Another flash, another red glow came up. I just flew into the weapon engagement zone.”

The ground fire was a deadly mixture of rocket-propelled grenades and PKM rounds. The concentration of fire forced Serrano and Renzi’s helicopter to break off their attack run. Gilbertson and Caldwell swung in to cover.

Gilbertson was the first of the Apache crews to locate the main source of the ground fire — a truck-mounted DShK 12.7 mm machine gun. He told Serrano that he had a clear shot at the heavy machine gun. “I said, ‘You have the guy in sight, you have a clear shot, take it,’” Serrano recalled.

The ensuing volley from the Apache’s 30 mm guns temporarily put the gun out of commission. Its operator left the truck and ran inside a building but soon emerged with a fresh belt of ammunition.

The next volley from Gilbertson’s Apache disabled the gunner but left the weapon intact.

“If we leave that thing there, that thing is going to have the opportunity to take down something else,” he said.

His major concern was in making the air corridors in that region a bit safer. Chinooks often flew through that area unescorted. If one of them were to be hit by the machine gun, American lives could be lost. “It had to be taken out,” Serrano said.

He knew they had one good chance to take it out before the insurgents relocated it.

They began taking fire as soon as they were in range. Gilbertson fired a Hellfire air-to-surface missile. It malfunctioned, landing in a nearby field.

As he peeled off for another run, Serrano and Renzi maneuvered to cover, taking the brunt of the oncoming fire.

Renzi began laying down cover fire. Gilbertson and Caldwell’s Apache swung around and fired another Hellfire. This time, it was on target. The combined fire from both Apaches took out the machine gun.

“We always happened to be in the wrong place at the wrong time and we always did the right thing, Serrano said. “We got lucky a lot.”