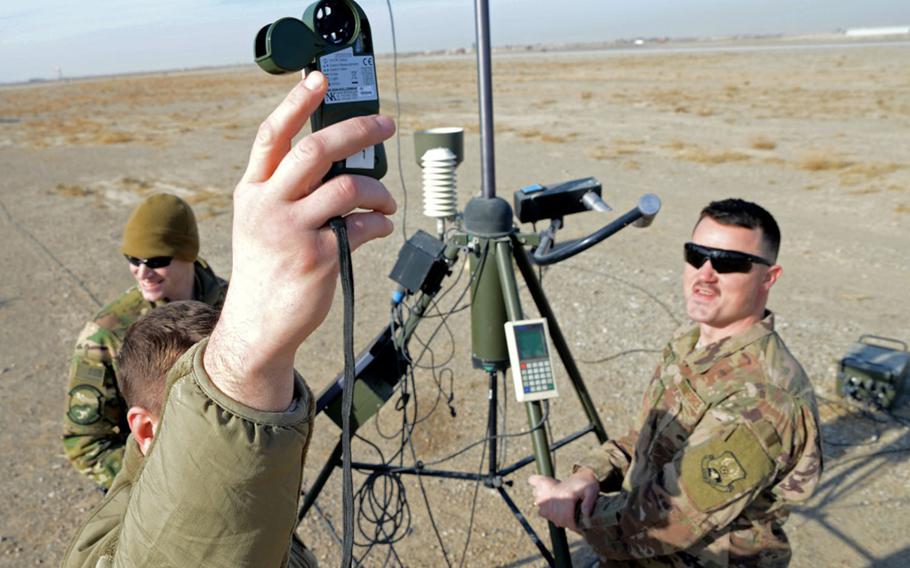 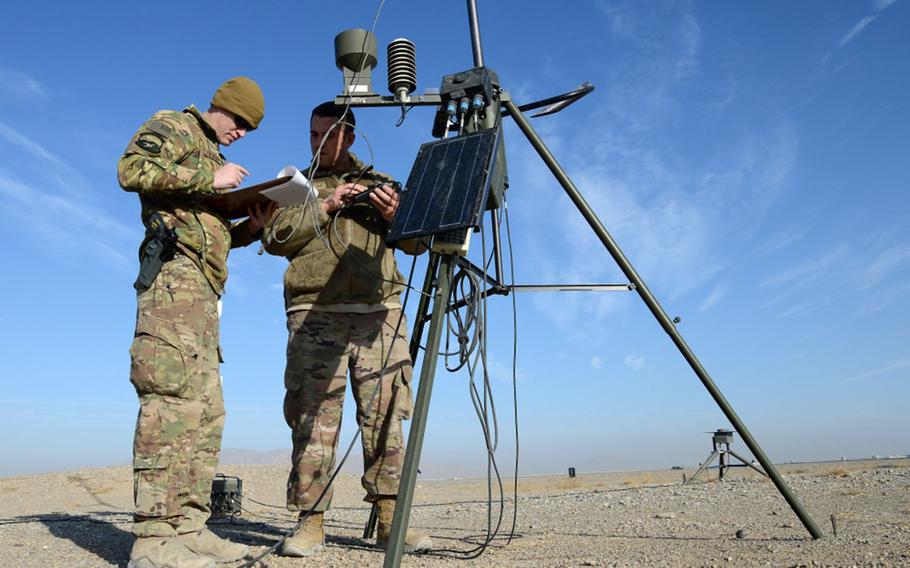 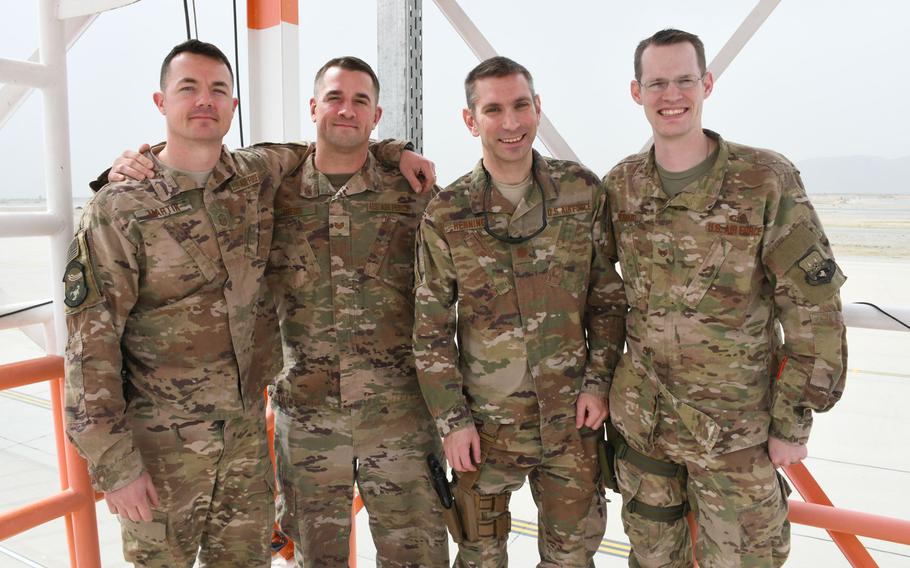 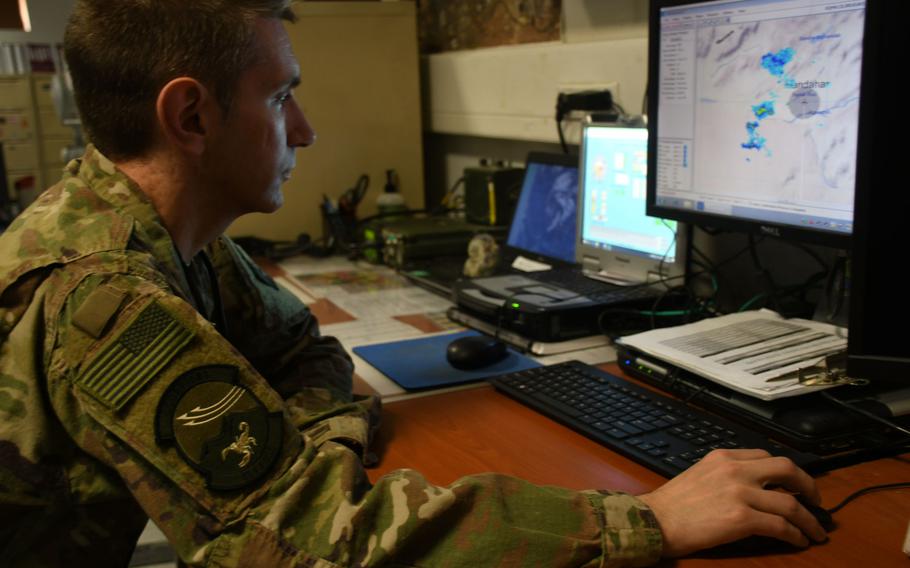 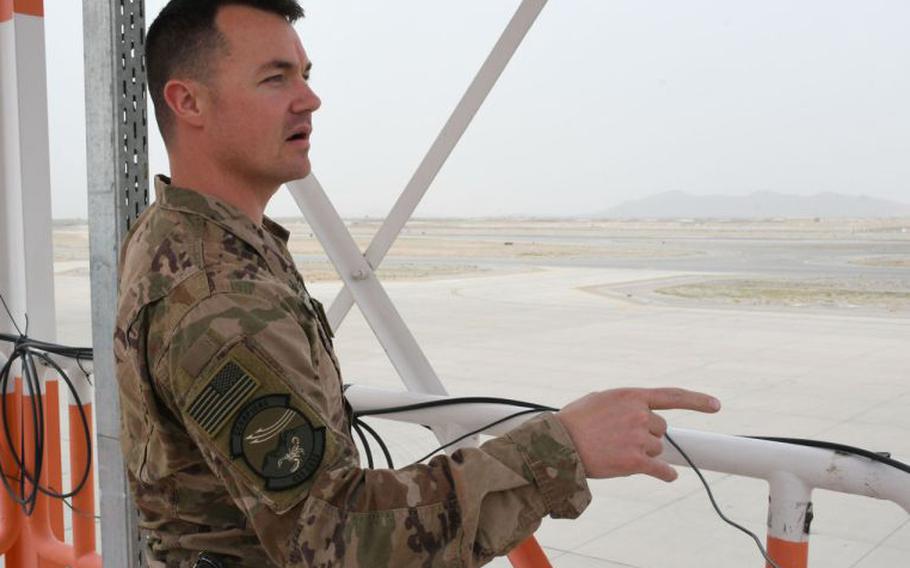 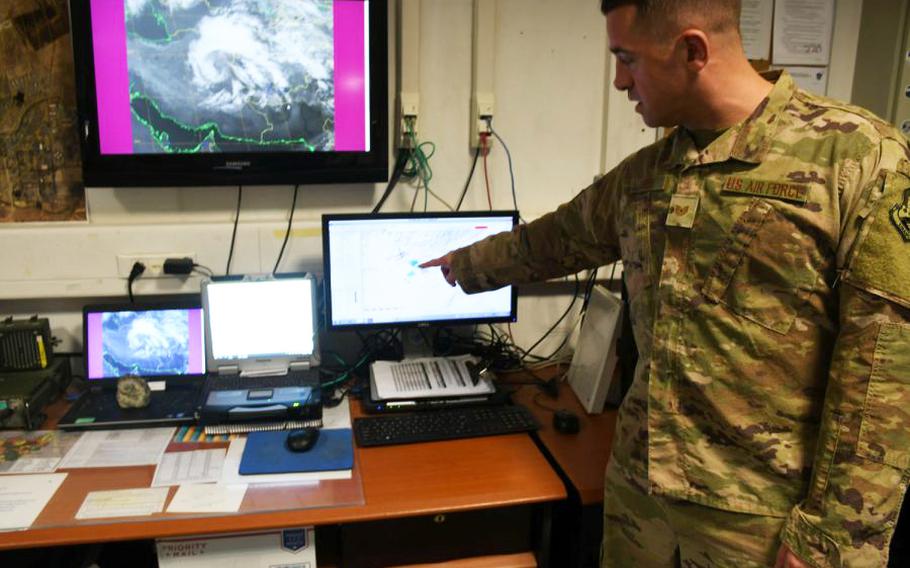 KANDAHAR AIR FIELD, Afghanistan — Last fall, as dark clouds moved into northern Kandahar province, a U.S. mine-resistant vehicle hit a landmine, and an airborne rescue unit had to be dispatched to the scene.

“We pulled up our radar and were like, ‘The thunderstorm is exactly 20 miles out, you’ve got 20 minutes to get there and get back,” recalled Air Force Master Sgt. Dominick Martin, flight chief of the 451st Expeditionary Operations Support Squadron’s meteorological team.

A rescue operation was quickly launched, and a group of U.S. servicemembers, one of whom was injured, was brought back to Kandahar Air Field just in time.

“We were up in our observation tower watching the storm moving around, then you could see the rescue guys drop the injured guy off and see him being taken to the hospital,” said Air Force Maj. William Henning, the met team’s flight commander. “It was a visual depiction of how our forecast had such a big impact.”

With more American air assets being moved into Afghanistan to combat persistent insurgents and incursions by Islamic State affiliates, the role of meteorologists will become increasingly significant, especially in the south — the focus of Henning’s team. More than 16 years into the war, the U.S. continues to carry out important missions in the area, the Taliban heartland. This happens to be among the most difficult places in the world to forecast weather, meteorologists say.

The work of meteorologists is vital for ensuring the safety of aircrew and military assets.

To keep up with that demand, the four men who make up the 451st EOSS meteorological team work 24 hours a day to ensure aircrews have the most up-to-date weather information.

Their work is broken into two parts: observing and a forecasting.

Observing entails scanning the airfield at least once and hour to look for things like low visibility, lightning, cloud height, wind direction and speed, temperature and dew point. When weather is bad, several observations are made an hour.

To help with their forecasts, the team uses sophisticated instruments, including satellite imagery and the only radar installation in southern Afghanistan, which they are constantly monitoring.

Kandahar and the surrounding areas see everything from strong winds and lightning to sand storms and hail. Understanding the different weather conditions allows operators to initiate missions in areas where they can be maintained.

But providing accurate information for aircrews operating in the region is difficult, according to Martin — who is on his fourth deployment to Afghanistan and has worked as a meteorologist across the United States and Europe — particularly because of a lack of data observation posts in the volatile area.

“It’s one of the hardest places, I think, on the planet to forecast for because it’s data-sparse,” Martin said. “Commanders and decision makers and pilots in commands, they don’t want the ‘50 percent chance of precipitation,’ that the National Weather Service is going to tell somebody. They want to know if they can put a $2 million aircraft in an area safely or not.

“There’s a lot of guesswork, and you’re saying, ‘I really feel confident this is going to happen in this area at this time,’ but in the back of your mind, you’re thinking there’s also a small possibility it could be really bad there.”

Because of the stakes involved, met team members are an integral part of U.S. efforts in Afghanistan, even if their jobs aren’t usually as exciting as those of airmen flying missions, said Tech Sgt. Michael Theos, the air field services noncommissioned officer in charge.

“With a lot of that stuff they are talking to us before it happens,” Theos said, referring to his colleagues who plan aerial operations. “Pretty much anything that happens they’re talking to weather, they’re looking online to see what’s occurring, the observations, the forecast, so we’re very much a part of it.”

That includes the ongoing airstrikes against Taliban narcotics labs, which Theos said planners have been regularly contacting his team about. The strikes are intended to target the insurgents’ revenue streams and are part of a larger expansion of U.S. airpower in Afghanistan.

In February, Air Force Maj. Gen. James Hecker, commander of NATO Air, said that Afghanistan had become U.S. Central Command’s main effort because of success in Iraq and Syria and that the military had begun shifting resources to the south Asian nation to combat the Taliban, the local Islamic State branch and other groups. The spike came after U.S. forces were given more authority to target Taliban insurgents, who have made substantial gains in recent years.

The uptick in activity and the buildup mean the current meteorological team at Kandahar and its successor will continue to play an important, behind-the-scenes role in America’s longest war.

The 451st Air Expeditionary Group it supports, “already made exceptional gains in 2018 and we intend on maintaining this trend,” commander Burdick said, adding that it would be impossible without the meteorologists.