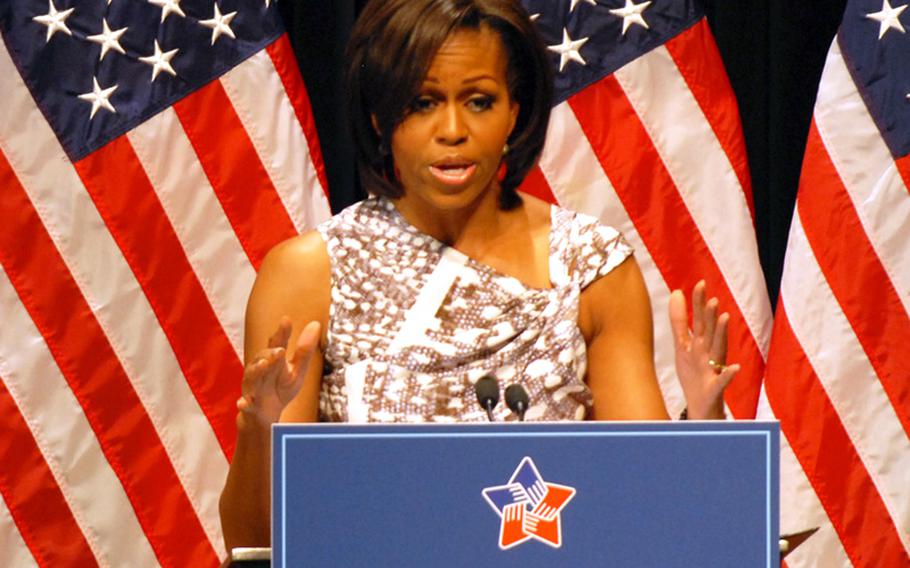 First lady Michelle Obama speaks about the White House's "Joining Forces" military family support campaign to a crowd of National Guard and local families in Columbus, Ohio, on April 14, 2011. The latest development in the campaign is an effort to prepare future physicians for the next generation of veteran patients. (White House photo)

WASHINGTON &mdash; Medical schools will soon include more course work on post-traumatic stress disorder, traumatic brain injury and other common military ailments as part of a White House-led effort to prepare future physicians for the next generation of veteran patients.

First Lady Michelle Obama and officials from both the Association of American Medical Colleges and the American Association of Colleges of Osteopathic Medicine announced the plans Wednesday afternoon at a speech before students at Virginia Commonwealth University. The effort includes more shared research and clinical trials among 130 medical and osteopathic medical schools around the country, including Ivy League and other major collegiate research institutions.

&ldquo;We have to meet our veterans and military families where they live,&rdquo; Obama said. &ldquo;We have to engage all of this country&rsquo;s doctors, nurses and health care providers on the challenges these families face, especially on the issues of mental health.

&ldquo;Today, we are ensuring that a generation of doctors, medical schools and research facilities will make sure our heroes receive care that is worthy of their service.&rdquo;

Officials from the association on Tuesday told reporters the goal is to ensure that young medical professionals are familiar with the signature wounds of war, and able to more effectively treat the millions of veterans who will struggle with those issues for decades to come.

White House officials said more than half of Iraq and Afghanistan veterans receiving treatment for mental health issues rely not on Department of Veterans Affairs physicians, but instead on private medical practices.

John Prescott, director of academic affairs for the association, said that while many of the schools touch on military health topics, most don&rsquo;t have them as a core competency for graduates. The new effort will look for ways to better integrate those lessons into schools&rsquo; curricula, and make sure students are familiar with problems veterans could be facing.

For some students, that will likely mean standalone courses on topics like PTSD and TBI, as well as other common battlefield injuries.

Obama told the medical students at the event that the chance to reach veterans in their future medical work is both a great opportunity and a great responsibility.

&ldquo;You will singlehandedly be able to show these heroes that this country is here for them, no matter what,&rdquo; she said. &ldquo;You will change these heroes lives for the better, and you will help uphold this nation&rsquo;s sacred trust with our veterans and their families.&rdquo;

The effort is part of the first lady&rsquo;s Joining Forces campaign, designed to highlight the sacrifices and needs of troops, veterans and their families. Program officials said no federal money is being used for the college coordination efforts, but Defense Department and VA officials will assist with planning and information sharing.