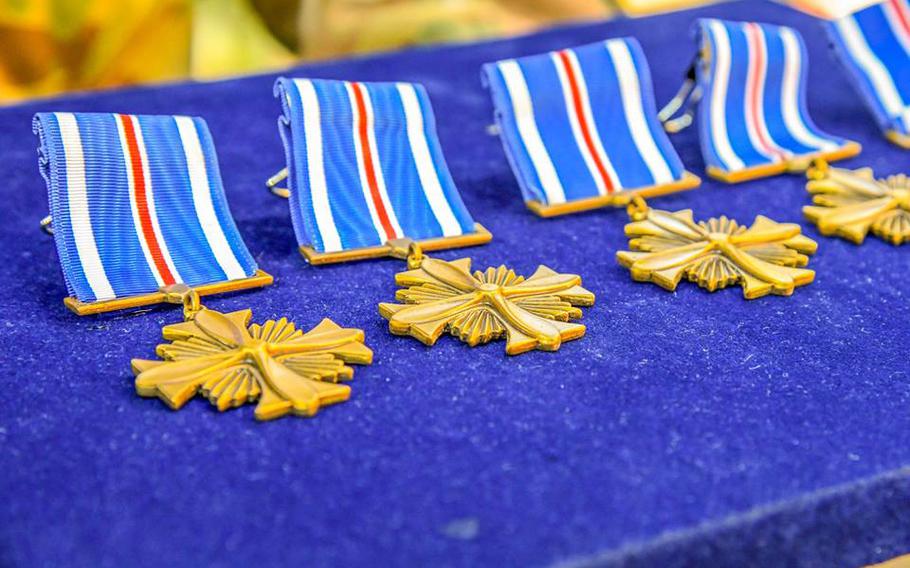 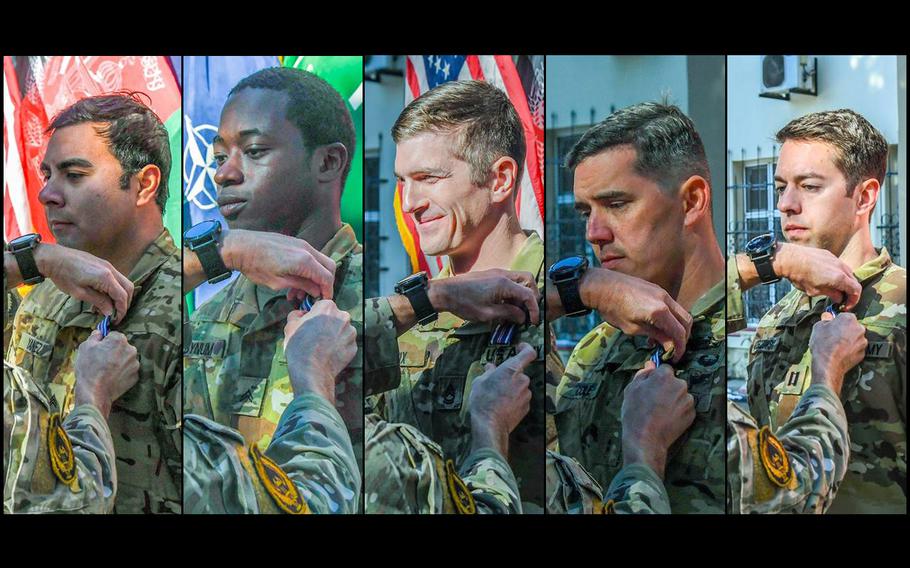 Under fire and carrying a badly wounded patient, the Black Hawk helicopter was just lifting off an Afghan battlefield when the crew chief saw an Army Ranger in the landing zone get shot and drop to the ground.

The Black Hawk darted back to evacuate the fallen Ranger.

Spc. Emmanuel Bynum, thinking quickly, directed the pilot to make an emergency landing on a dusty patch masked from most enemy fire. They still took fire — in all, about two dozen rounds to the helicopter, which would become nearly unflyable.

After the wounded Ranger was loaded, the Black Hawk lifted off. But there was more danger to come as they flew from Paktia province toward a base in Logar province dozens of miles to the north.

For their courage during the July operation, Bynum and four other aircrew members received the Distinguished Flying Cross with valor during a Jan. 5 ceremony officiated by Gen. Scott Miller, the top U.S. commander in Afghanistan.

Each of the five “completely disregarded his own safety” and refused to leave Army Ranger Sgt. 1st Class Christopher Andrew Celiz and an unnamed casualty on the battlefield, award citations said.

The award, created in the early years of military aviation and given to servicemembers participating in aerial flight who distinguish themselves through heroism in combat or extraordinary achievements, is the military’s seventh-highest personal decoration.

Shortly before 6 a.m. on July 12, and after relocating from Forward Operating Base Dahlke to support combat operations from FOB Lightning, some 25 miles further south, the crew got its second medevac mission of the morning — at least one patient in need of urgent treatment. There might be enemy fire in the area, they were warned.

Dustoff 24 was in the lead on the 12-minute flight to the battlefield, with Krzeczowski in command of the bird and the two-helicopter mission. Cole manned the radio and the aircraft systems.

Six, the senior medic, spotted purple smoke marking the landing zone and helped orient the crew for landing, but soon the Black Hawk began taking fire. Without hesitation, Six and Bynum hopped out to cover Yanez as he rushed to the casualty, maneuvering across the battlefield under heavy fire, their citations said.

A team of U.S. soldiers laid down suppressing fire as they accompanied Yanez and the patient back to the helicopter, where the pilots — despite the enemy fire — calmly readied to launch.

Then, just after takeoff, Bynum called out that he saw a soldier get shot.

It would turn out to be Celiz, who at the time was assigned to 1st Battalion, 75th Ranger Regiment, based at Hunter Army Airfield, Ga., and was securing the landing zone. His team was assisting CIA counterterrorism efforts to kill or capture top militant targets, Politico reported later, citing unnamed sources.

"SFC Celiz was firing back at the enemy during the takeoff when he was struck by an enemy round,” said Lt. Col. Nicholas Ploetz, Task Force Eagle Assault commander, in an emailed statement.

The ground force immediately called Dustoff 24 back. As Krzeczowski circled back, Bynum guided him to a spot past the original landing zone that he hoped would shield them from enemy fire, the documents say. Once they’d landed, Bynum hopped out.

“SPC Bynum completely disregarded his own safety by exiting the aircraft while under heavy fire to provide security for the aircraft and crew,” his citation says.

Meanwhile, Six ran to where Celiz was being placed on a litter, finding the Ranger in critical condition. He rushed him back to the helicopter, moving from cover under fire to load him into the aircraft, which was soon airborne again.

Within a minute of launching, Cole, who had been seated closest to enemy fire in the front right seat, reported that parts of the bird’s control system appeared to have sustained serious damage. Flying on would be extremely risky.

Normal procedure is to land right away, but the Ranger was gravely wounded and Krzeczowski decided to fly to Dahlke, where a forward surgical team was waiting.

“Ballsy to say the least,” said Navy Lt. Jack McCain, a Black Hawk pilot who talked about the citation with Stars and Stripes. “It was a judgment call, but yeah, I would say the situation was about as serious as you could get.”

The call was likely based on how the aircraft was responding to the controls, said Army Maj. David Powell, a Black Hawk pilot who earned a Distinguished Flying Cross for a 2011 medevac mission in Afghanistan.

Along the way, Six and Yanez found a gunshot wound to Celiz’s right flank but no exit wound. Yanez applied a chest seal and Bynum began manual ventilation to help the Ranger breathe while the medics “worked diligently to provide the best care possible” to the two patients, the citations said.

Although the aircraft was hit 22 times, Dustoff 24 made it to Dahlke and the awaiting surgical team.

Despite their efforts, Celiz later died of his wounds. The mortar platoon sergeant, who had served in Iraq and Afghanistan before joining the Rangers, was on his fifth deployment with the regiment. His commander would refer to the 32-year-old, a husband and father of an 8-year-old daughter, as a “national treasure.”

The unnamed patient, an Afghan soldier who had been shot in the chest, underwent surgery at Dahlke and was transferred to the main theater trauma hospital on Bagram Air Field, Ploetz said. “He survived his wound.”

The unnamed patient lived, according to a military official who declined to be named because they were not authorized to speak to the media. The patient was not a U.S. soldier.

After arriving at Dahlke, the crew needed to continue medevac coverage and their aircraft was unfit to fly. Krzeczowski got a spare from Task Force Eagle so they could jump their gear over and fly back to Lightning for follow-on missions.

The medevac crew is part of a “very special breed” who goes out in the only airframe with “absolutely zero protection in the worst possible conditions,” said Col. Matthew R. Weinshel, 101st CAB commander, in an email.

Each time a medevac crew goes out, they don’t know what they’re getting themselves into, he said. Still they go.

“You do your job professionally, competently and with valor,” Weinshel said of the crew. “I am proud of you all.”