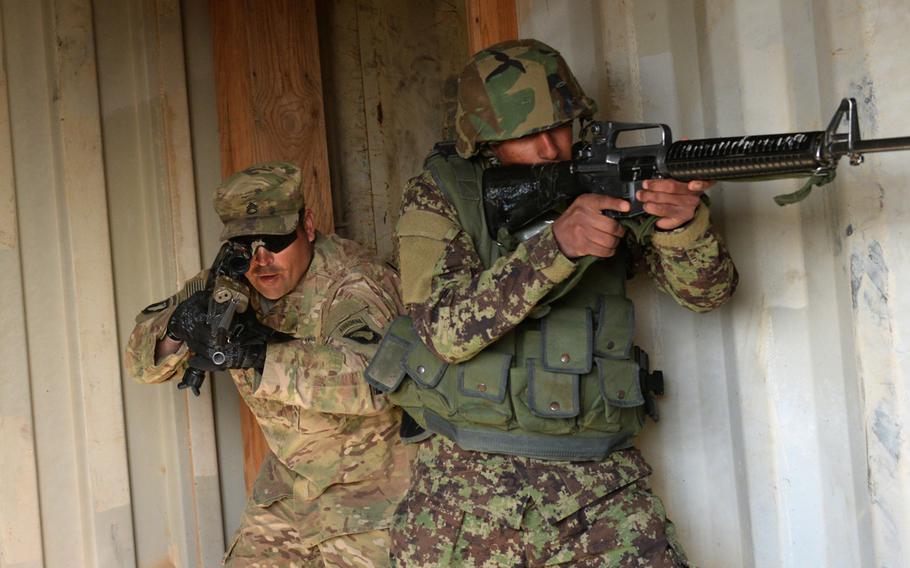 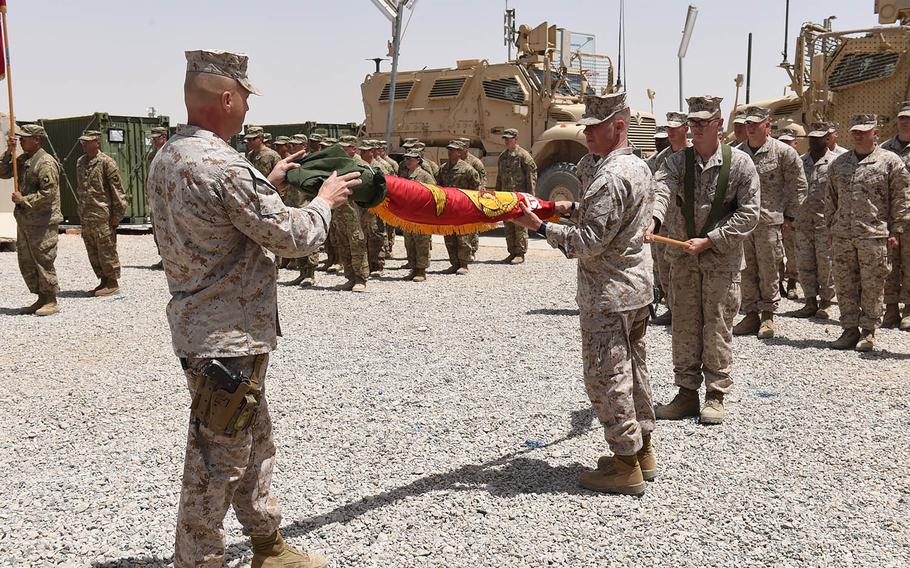 Members of Task Force Southwest prepare to raise the Marine Corps flag at a transfer of authority ceremony at Camp Shorab, Afghanistan, Saturday April 29, 2017. The Marines are taking over the Helmand train-and-advise mission from Task Force Forge, an Army unit (pictured in the background) which has been in Helmand since last year. (E.B. Boyd/Stars and Stripes) 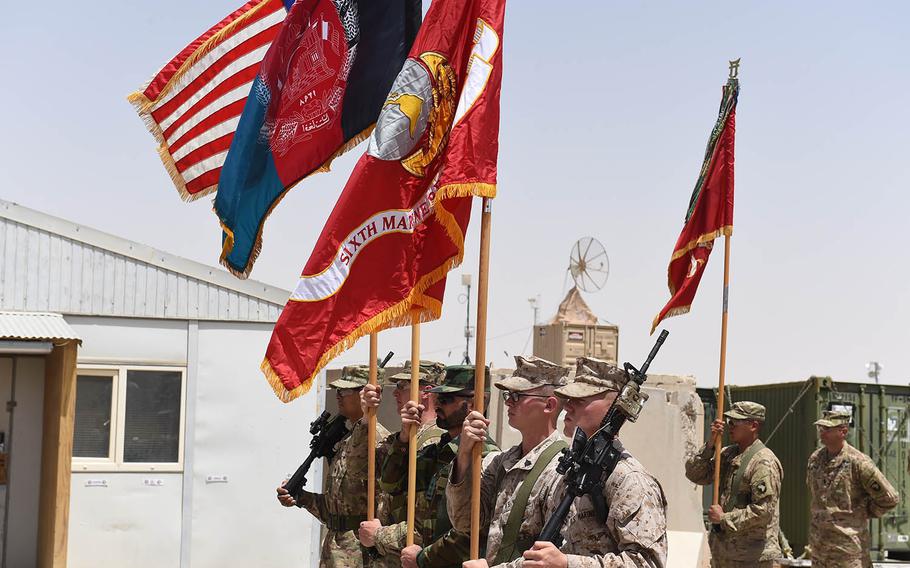 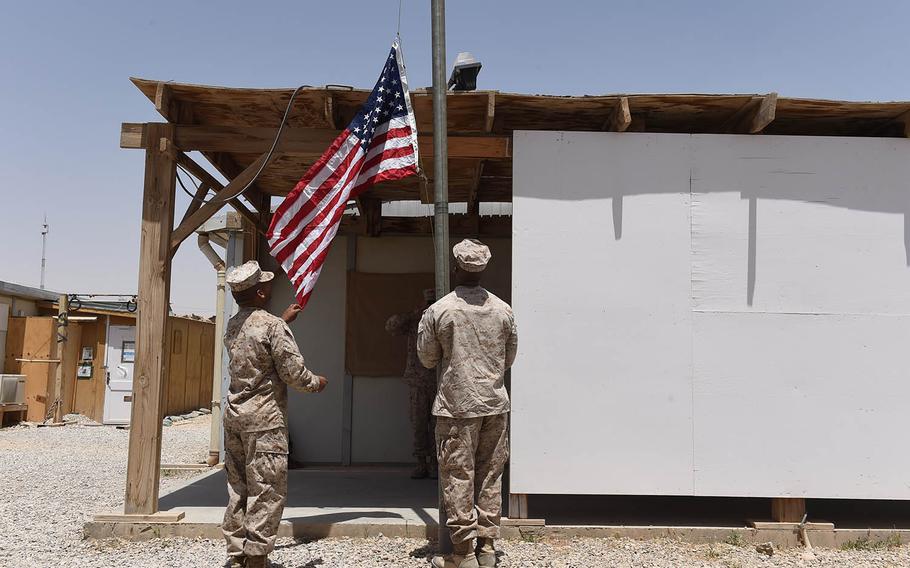 Members of Task Force Southwest raised the American flag during a transfer of authority ceremony at Camp Shorab, Afghanistan, Saturday April 29, 2017. The Marines are taking over a train-and-advise mission from Task Force Forge, an Army unit which has been in Helmand since last year. (E.B. Boyd/Stars and Stripes)

CAMP SHORAB, Afghanistan — For the first time since the drawdown of U.S. troops in Afghanistan in late 2014, U.S. Marines returned to Helmand province en masse Saturday as the 300-person Task Force Southwest took over the training and advising mission there.

Unlike its Marine predecessors in the region, Task Force Southwest is not a combat unit. It’s an advisory team made up of troops from different units.

The transition of authority is a routine changeover that does not change the overall number of U.S. forces in Afghanistan. Task Force Southwest is replacing a slightly smaller Army unit called Task Force Forge, which deployed to Helmand last year.

“We are excited to be back in Helmand, and we’re pleased to assume this mission,” said Task Force Southwest commander Brig. Gen. Roger Turner Jr. at the transfer-of-authority ceremony at Camp Shorab. Camp Shorab stands on land previously occupied by Camp Bastion, which was dismantled and vacated by NATO forces during the 2014 troop drawdown.

The transfer of authority Saturday comes as Afghan forces across the country are struggling to hold off the Taliban. In the intervening two years, the group has made key gains in strategically important provinces like Helmand, including taking over large parts of Sangin district, where many Marines died during the surge of 2009-2010.

Two key coalition goals this year are to prevent Afghan forces from letting any provinces fall completely into insurgent hands and to stem the overall loss of territory.

Helmand is a prime focus of the Taliban. It lies along key smuggling routes, and its poppy fields put money into the group’s coffers.

The Taliban announced its spring offensive on Friday, vowing to target Afghan and coalition forces. Turner said Saturday that he expects the militants to continue their previous strategies.

“They’ll plant IEDs everywhere, and they’ll indiscriminately target both security forces and the population,” he said. “They’ll continue to profit from the narcotics to finance their operations. They’ll attempt to extort people for money.”

Advisers returned to Helmand almost immediately after the drawdown as weaknesses within the Afghan forces began emerging. The number of coalition troops stationed there has grown from a handful of special operations troops in early 2015 to the several hundred troops that make up Task Force Forge.

Unlike during the surge, the new Marine unit will not be patrolling villages or manning outposts. Instead, they will provide advice and guidance to commanders of the Afghan army’s 215th Corps and the 505th national police zone. They will also coordinate enablers, like close-air support.

Turner said he has confidence that the Afghans will take on the Taliban this year, especially the current generation of Afghan leaders who have grown up in the conflict.

“They’re younger and more steeped in the current fight, and they’re more effective in the battle space,” he said.

The Marine Corps was responsible for Helmand province during the later years of NATO’s International Security Force Assistance mission, which ended in 2014. About half the troops in Task Force Southwest have previous experience in Helmand or with advising.

NATO officials say there shouldn’t be too much inferred about the fact that the Marines were brought back for this mission. A NATO spokesman told Stars and Stripes last winter that, with demands being placed on the Army in Europe, Resolute Support turned to the Marine Corps to take on the advising role.

Task Force Southwest will stay in Helmand for nine months. Resolute Support, which is waiting for the White House’s revised Afghanistan strategy, has not yet announced whether another unit will replace them.