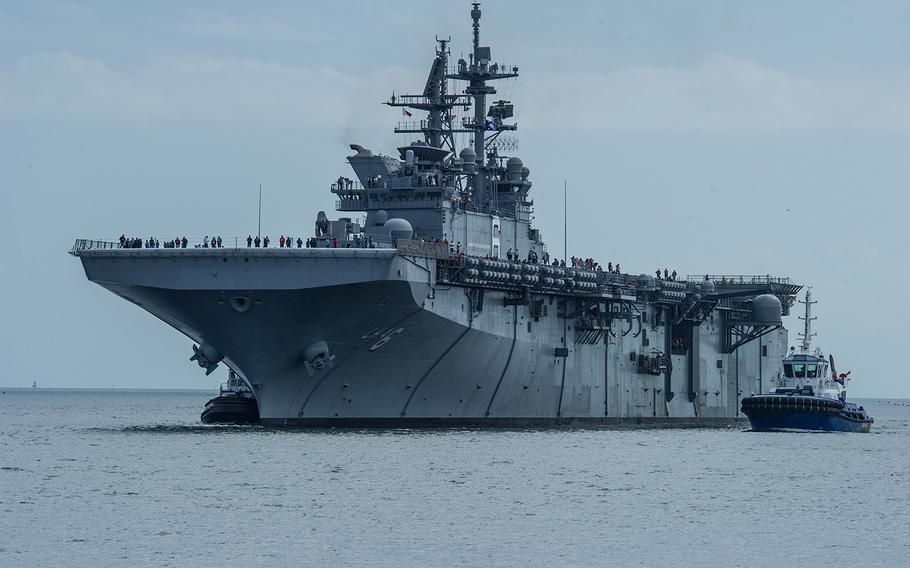 CAMP PENDLETON, Calif. — The departure was like most other Marine deployments — with camouflage-clad young men and women tagging giant sea bags, smoking and texting loved ones in a dark parking lot as they waited to board a bus for the airport. But there weren’t many tears or hand-lettered signs at this send-off.

The 70 Marines and sailors who left Camp Pendleton on Monday night were headed to Mississippi, where they will join nearly 200 more members of Special Purpose Marine Air Ground Task Force-South to board the Navy’s newest ship for a two-month trip around South America.

The ship, to be christened the USS America, will be the first America-Class amphibious assault ship for the Navy.

The LHA-6 will replace the USS Peleliu as the flagship of an expeditionary strike group and will carry a Marine expeditionary unit. But while other MEUs typically used amphibious landing craft and aircraft to go ashore, the future USS America was designed with no well deck, which means extra room for the F-35B joint strike fighter and MV-22 Osprey and aviation fuel, but no place for amphibious assault vehicles and other landing craft.

First, though, the ship must get to its home port in San Diego and, Marines said, it is too large to go through the Panama Canal.

Lt. Col. George Hasseltine, the commander of SPMAGTF-South, said the unit’s primary mission is to support the ship’s safe transit from the shipyard to San Diego. Along the way, the Marines will stop in several Central and South American countries for training exercises and other engagements with militaries in partner nations.

Hasseltine said the unit’s Marines will share martial arts training, shooting skills, first aid, communications, tactical decision making and other skills with the partner nations — many of whom have well-established militaries with decades of experience fighting terrorism.

While most Marine units go through six to eight months of training before a deployment, SPMAGTF-South didn’t even exist six months ago. The unit came together in about three months, with some Marines learning just a few weeks ago that they’d be deploying.

First Lt. Krysta Porter Lott, the unit’s adjutant, checked into the unit June 9 and said they were pulling new people into the command element until just days before departure.

Roughly 70 percent of the unit’s command element, including Hasseltine, came from the Pendleton-based 1st Reconnaissance Battalion. Marines from Combat Logistics Battalion 13 make up the logistics element, 1st Light Armored Reconnaissance Battalion is the ground combat element and a handful of Ospreys and support Marines from a North Carolina-based unit will be the aviation element.

The way the unit came together so quickly was “really crazy but really pretty awesome,” Porter Lott said.

Cpl. Nicholas Pietrowiak, Lance Cpl. Michael Baldi and Lance Cpl. Francisco Polin all said they were excited to get the chance to go on the new ship and see South America.

“We’re getting the sweetest deal,” Baldi said. “A lot of people were fighting for this.”

Hasseltine said he is not concerned that the unit did not have the typical pre-deployment work-up period.

“Marines are very flexible,” he said. “That’s kind of what we do: come together on short notice and deploy.”