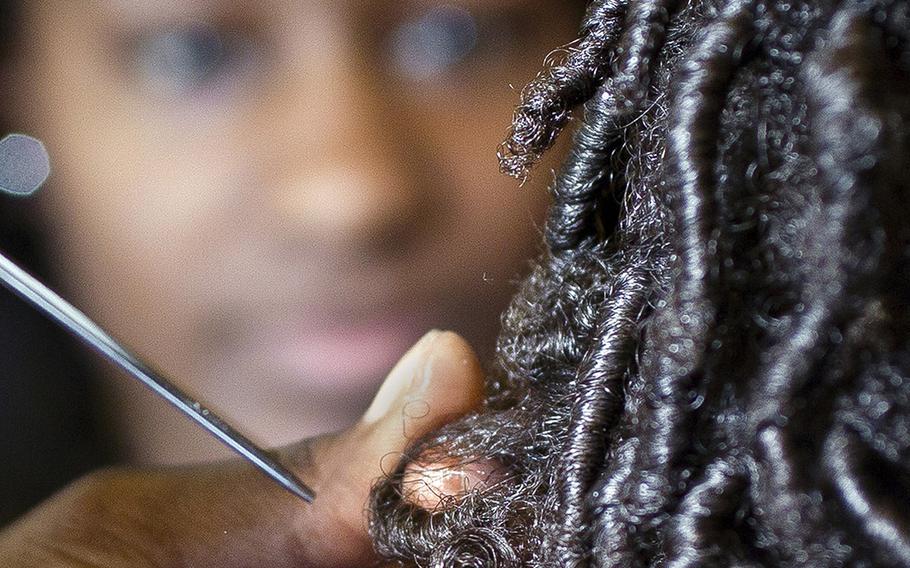 The Marine Corps Uniform Board has released a survey to get feedback about whether two banned hairstyles for women — dreadlocks and twists – should be allowed. (Allison Long/Kansas City Star file photo)

WASHINGTON — Following a directive by the secretary of defense, the Marine Corps is reconsidering its female hairstyle regulations and wants Marines to weigh in on the issue.

The Marine Corps Uniform Board released a survey Monday to get feedback about whether two banned hairstyles for women — dreadlocks and twists — should be allowed.

Specifically, Marines will be asked whether they agree with preliminary recommendations by a special working group:

Continue to prohibit the wear of lock (dreadlock) hairstyles. Authorize the wear of the twist hairstyles in uniform for medium and long length hair, as long as they conform with basic regulations for multiple braid hair.The brief survey can be taken until Friday by selecting the Special Marine Corps Uniform Board: Female Hairstyle Regulations Survey. Female and male Marines in the active duty and reserves can participate.

Secretary of Defense Chuck Hagel’s review order, directed to all the services, came earlier this year after an outcry by some soldiers and members of the Congressional Black Caucus, who claimed that Army regulations governing troops’ hairstyles were racist and unfairly targeted African-American women.

The Army pushed backed against the accusations. In a statement, spokeswoman Lt. Col. Alayne Conway said female African-American soldiers were involved in developing the hair standards, and the effort was led by an African-American woman.

In the release Monday, the Marine Corps said the working group found its current hairstyle regulations to be “non-discriminatory.”

The uniform board will make formal recommendations to the commandant about expanding the list of acceptable female hairstyles after reviewing the findings of the group and the survey results.