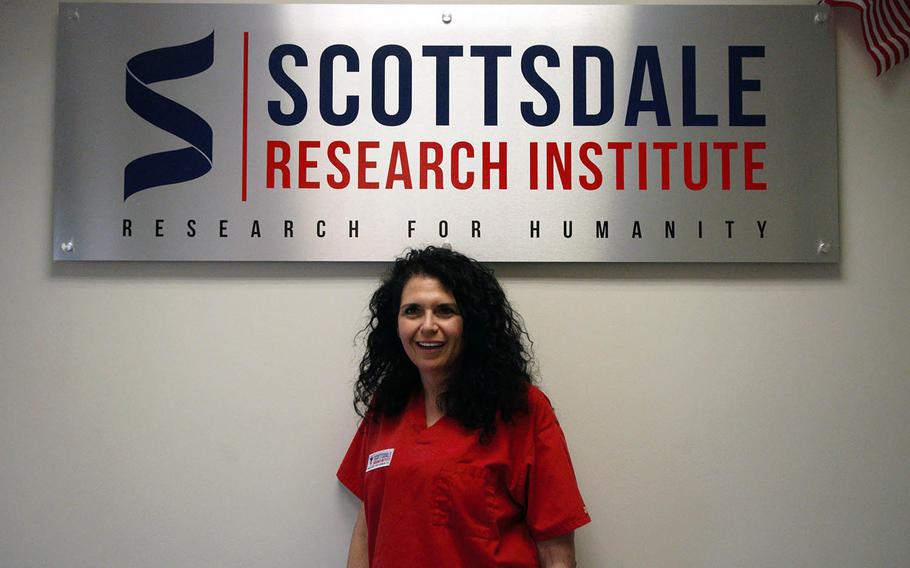 Buy Photo
Sue Sisley pictured inside Scottsdale Resarch Institute in Phoenix, the site of a groundbreaking study into marijuana's effects on veterans with PTSD, on Tuesday, May 2, 2017. Sisley is a psychiatrist known nationally as an advocate of medical marijuana research. (Nikki Wentling/Stars and Stripes)

WASHINGTON – Ten researchers gathered in San Francisco this week to comb through data from a just-completed study on the effect of marijuana on post-traumatic stress disorder – the first government-approved research of its kind.

The study, conducted by the Scottsdale Research Institute in Phoenix, aims to find whether marijuana effectively and safely treats PTSD. Its participants were all veterans – a group that has anecdotally touted marijuana in recent years as a useful treatment and, in some cases, a substitute for addictive opioids.

The efficacy study wrapped up this week after nearly a decade of planning, research and navigating bureaucratic red tape, said Sue Sisley, the principal investigator.

“I don’t think we would be at the finish line without the dedication of all these veterans organizations and individual veterans who stood by us all these years,” Sisley said. “Over the past decade, we had all these veterans standing shoulder-to-shoulder with us, helping to kick down doors. They never relented, and they knew we were determined to persevere.”

The researchers began analyzing the data and writing about the results this week, Sisley said. They plan to publish them later this year.

California-based Multidisciplinary Association for Psychedelic Studies, a nonprofit, is sponsoring the study, and it’s funded with a $2.2 million grant from the Colorado Department of Public Health and Environment.

During the study, 76 veterans were given 1.8 grams of marijuana each day of differing potencies. They chose how much to smoke and were asked to keep a daily journal. It was triple-blinded, meaning the participants, researchers and evaluators didn’t know who was receiving what potency of marijuana.

The full results of the study, including all the data, will be publicly released, Sisley said.

“We know the public has been waiting on this data for so many years,” she said. “We’re committed to putting everything out there, the good and bad of cannabis, for everyone to scrutinize.”

Sisley and her team had to gain approval and support from the U.S. Food and Drug Administration, the Drug Enforcement Administration and the National Institute on Drug Abuse to initiate the research – a process that lasted years.

Once the study began in 2017, researchers struggled to recruit local veterans who met the qualifications. At issue was their lack of access to the Department of Veterans Affairs hospital in Phoenix, where Sisley saw potential to find a large group of veterans who might be resistant to other PTSD treatments and looking for an alternative.

The VA said federal law restricted the agency from researching medical marijuana or referring veterans to projects involving the drug.

For some time, researchers considered redefining the study to include other participants who weren’t veterans. However, the group reached its enrollment goal in November 2018.

“It would’ve been easy to change the study and lose the veteran focus, but we just couldn’t do that,” Sisley said. “We’ve been feeling the weight of these veterans on our shoulders for this entire time.”

Support for marijuana has grown among the veteran population in recent years. After hearing from veterans who said they benefited from marijuana, the American Legion came out in support of Sisley’s study and has encouraged efforts to remove marijuana from the list of Schedule I drugs. Schedule I drugs include heroin, LSD and ecstasy, and are designated as having no medical use.

Depending on the results that will be published later this year, Sisley might have to conduct another Phase 2 trial, or begin Phase 3 – the final step before the FDA could make a decision on the treatment.

However, getting to Phase 3 could be thwarted by the DEA, Sisley said.

In the final months of Barack Obama’s presidency, the DEA announced it would license more growers to produce marijuana for scientific research – a decision that was meant to facilitate research into the drug. Two years later, federal authorities haven’t approved or denied any applications.

The National Institute on Drug Abuse – the only federally approved source for marijuana – provided marijuana for Sisley’s just-completed study. But NIDA, a government research institute, is only allowed to provide marijuana for academic research, not commercial sales, which would be necessary for the next phase, said Brad Burge, communications director for the Multidisciplinary Association for Psychedelic Studies. MAPS is a drug research and education nonprofit.

During Phase 3, researchers must test the drug that would ultimately go to market.

Of all the hurdles, this could be the “most severe barrier to cannabis research,” Sisley said.

“They have not made good on their pledge, and that’s really disturbing to scientists around the country,” she said. “This is a classic example of science being trumped by politics.”