Lt. Gen. David Berger nominated as next commandant of the Marine Corps 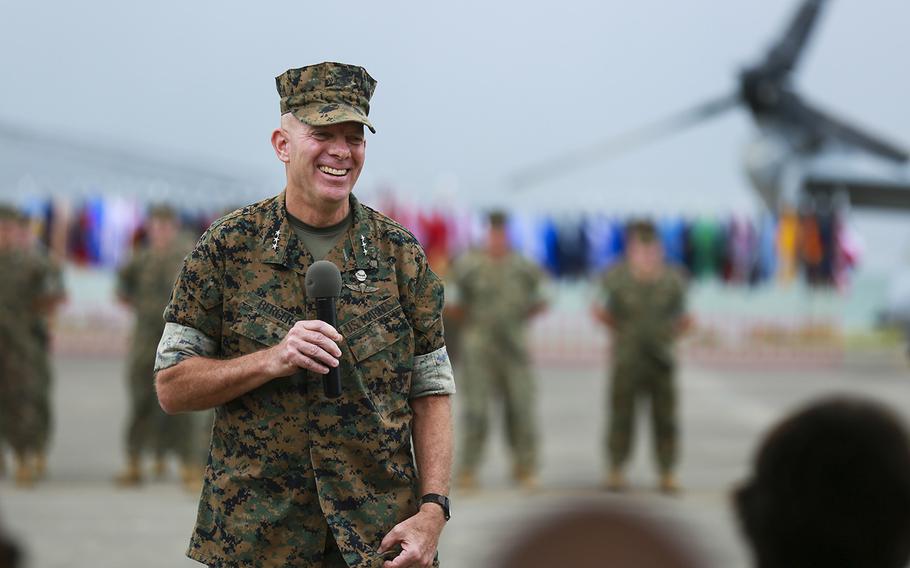 Lt. Gen. David H. Berger speaks during the U.S. Marine Corps Forces, Pacific change of command ceremony at Marine Corps Base Hawaii, Aug. 8, 2018. During the ceremony, Berger relinquished command to Lt. Gen. Lewis A. Craparotta. Berger has been nominated to become the next commandant of the Marine Corps. (Patrick Mahoney/U.S. Marine Corps)

WASHINGTON — President Donald Trump has nominated Lt. Gen. David Berger to be the next commandant of the Marine Corps, the Pentagon announced Wednesday.

His nomination was submitted Tuesday, according to a Senate notice, and it requests that he be promoted to the rank of general. If his nomination is approved, Berger will be the 38th commandant of the Marine Corps.

Gen. Robert Neller, the Marine Corps commandant since 2015, is set to retire this summer after serving for 44 years.

Berger, 59, commissioned in 1981 as an infantry officer after graduating from Tulane University in New Orleans with a bachelor’s degree in engineering, according to his Marine Corps biography. He was a battalion operations officer with 2nd Reconnaissance Battalion during Operation Desert Storm and later was an instructor at Marine Aviation Weapons and Tactics Squadron One in Yuma, Ariz. and at III Marine Expeditionary Force Special Operations Training Group in Okinawa, Japan.

He has deployed in support of Operation Iraqi Freedom as the commander of Regimental Combat Team 8 in Fallujah, Iraq. In 2012, he deployed to Afghanistan as the commanding general of 1st Marine Division during Operation Enduring Freedom.

Berger has a master’s degree in international public policy from Johns Hopkins University School of Advanced International Studies in Washington, D.C. as well as a Master of Science in military studies, according to his biography. He is also a graduate of the Army’s Ranger School, Jumpmaster School, the Navy Dive School and the Marine Corps Amphibious Reconnaissance School.

His awards include the Defense Superior Service Medal, the Legion of Merit Medal, and the Combat Action Ribbon.