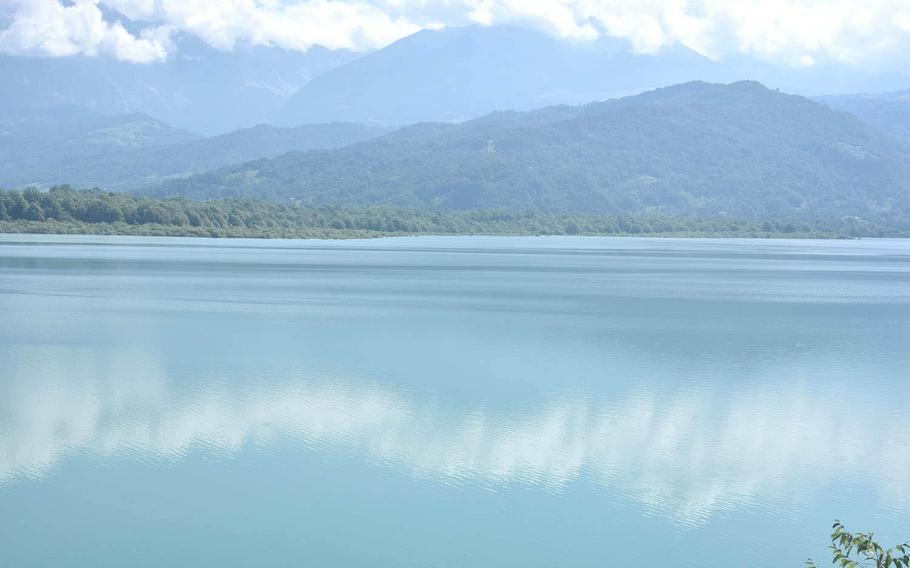 Lago di Santa Croce in Italy is clear and still enough that reflections of the surrounding mountains and clouds can sometimes be seen in reflections. (Kent Harris/Stars and Stripes)

Lago di Santa Croce in Italy is clear and still enough that reflections of the surrounding mountains and clouds can sometimes be seen in reflections. (Kent Harris/Stars and Stripes) 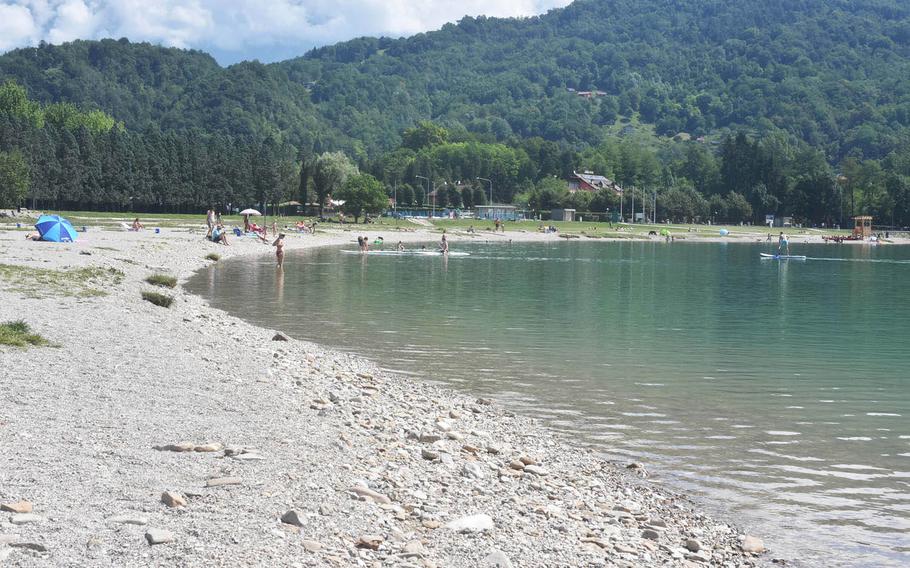 If you're looking for a sandy beach, the shores of Italy's Lago di Santa Croce don't match the numerous communities on the Adriatic Sea about an hour away. But if you're OK with rocks and pebbles, it's usually a lot less crowded than the beach resorts. (Kent Harris/Stars and Stripes) 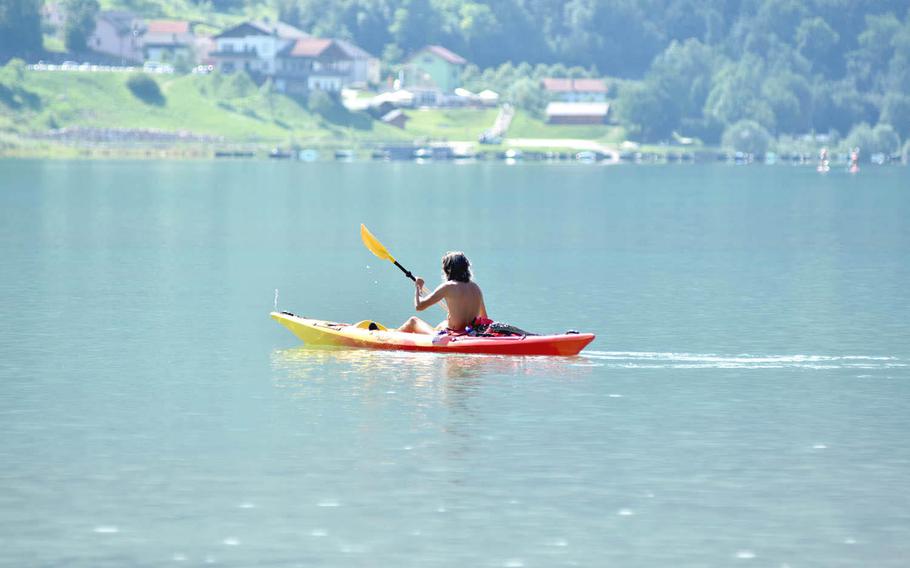 A man paddles a kayak on Italy's Lago di Santa Croce. The town of Farra D'Alpago in the background. (Kent Harris/Stars and Stripes) Visitors to Lago di Santa Croce in Italy can rent a chair or umbrella on the pebbly beach - or bring their own. (Kent Harris/Stars and Stripes) 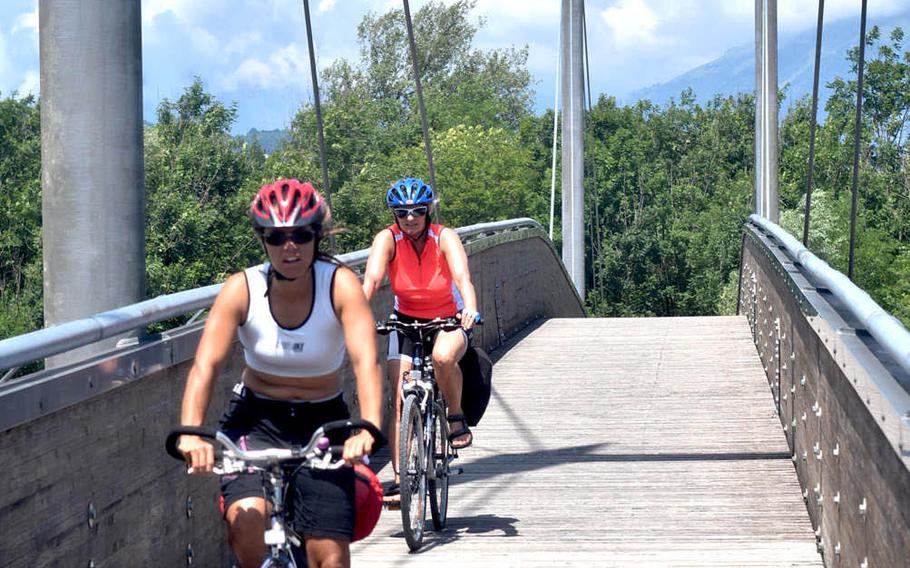 There are numerous paths for bicyclists and hikers around Lago di Santa Croce, including one that crosses a long bridge that spans a creek not far from the main campground at Farra D'Alpago. (Kent Harris/Stars and Stripes)

The mountains or the beach: Which is a better option for overcoming sweltering summer days in northeastern Italy?

Most Italians would answer beach. And, during the summer months, there are numerous resort communities along the Adriatic Sea south of Aviano Air Base that are swamped with locals and visitors from the north. Bibione, Caorle, Lignano and Grado are among the most well-known.

But there are some alternatives for those who can make do without any sand on their beach. Lago di Santa Croce is a prime example. And it offers a mountain setting that the seaside resorts lack.

The lake, thought to be formed by a landslide that slowed the waters of the Piave River, is actually a bit closer to Aviano than the seaside resorts, thanks to a pair of highways that make the trip a quick one. Expanded by a dam on one side dating to the 1930s, the lake is the second-largest in the Veneto region after Lake Garda.

Still, obscured by a series of tunnels through the surrounding mountains, the lake is easily missed if you stick to the highways. The A27 passes right by it. So does the SS51, which connects to the SS13 that runs near Aviano. To get to a beach, visitors need to turn off onto the smaller SP423.

The beach, formed of pebbles and rocks, is in the town of Farra D’Alpago. Many of those soaking up the sun here are visiting the adjacent campground. But locals from Conegliano also make the short trip.

On most days, there are far fewer bathers than on the more popular beaches to the south. And yet Croce has its advantages: Though most of it is inaccessible to bathers, those who do take the plunge need not worry about sharks or jellyfish. It’s also ideal for windsurfing, thanks to frequent winds. In fact, it just hosted the Formula Windsurfing World Championships. Those who hike and bike will find plenty of paths on which to travel.

If the sun proves a bit too hot on the rocky beach, there are roads that run farther into the mountains. The SP28, which starts in Farra, leads to the SP422. From there you can get to the SP61, which ends in Caneva. So it’s entirely possible to have both mountains and beach in a short drive.

Lago di Santa Croce is right off the A27 north of Vittorio Veneto. Take the exit for the lake/Farra. From the Aviano area, take the A28 to the A27 interchange at Conegliano and head north toward Belluno. A slower option that saves on tolls is to take the SS13 to the traffic circle past the Salici shopping center west of Sacile. From here, turn off on the SP71 and continue on the SS51, which runs to the lake. To reach the beach at Farra D’Alpaso, turn off the SS51 onto the SP423 (Cansiglio Alpago). Swimming areas are marked.

During summer, a kiosk selling food, drinks, toys and other items is open from 10 a.m. to 6 p.m. weekdays; it’s open a little later on weekends. You can rent chairs, umbrellas, kayaks and other beachy things from a van that’s on site from about 9 a.m. to 7 p.m. daily.

If you want to park in the blue-linked spaces nearest the beach, you’ll have to feed a meter. There are some free spots several blocks away if you’re willing to walk. It costs 80 euro cents to take the stretch of the A27 that currently serves as a bypass for the SS51.

A good reason to take the SS51 is the large number of restaurants and grocery stores along the way. That’s not the case on the A27. There are a few places to eat in Farra, a town of about 2,700. The kiosk on the beach sells packaged sandwiches, chips, various drinks and ice cream.