Yes, you can get bad pizza in Vicenza, Italy 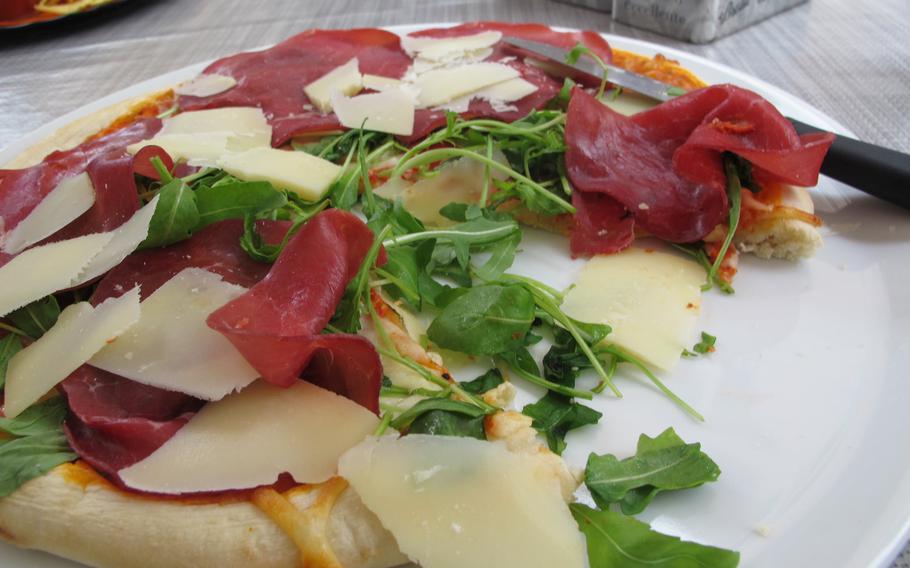 It looked good, but a pizza at Caffe Tazzo D'oro on Vicenza's high street was a disappointment mainly because of its doughy, flavorless crust. (Nancy Montgomery/Stars and Stripes)

It looked good, but a pizza at Caffe Tazzo D'oro on Vicenza's high street was a disappointment mainly because of its doughy, flavorless crust. (Nancy Montgomery/Stars and Stripes) 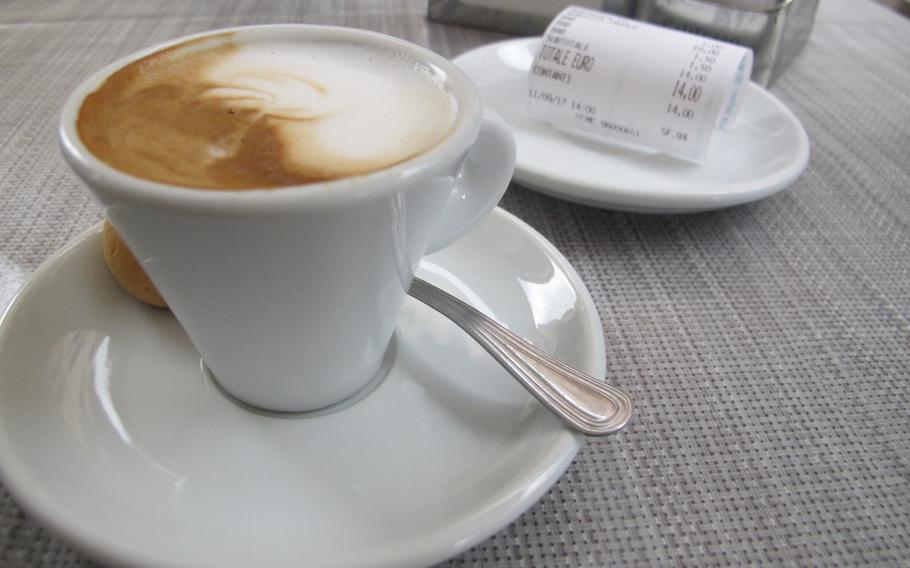 A small pizza, a small bottle of water and a coffee at Caffe Tazzo D'oro on Vicenza's high street costs 14 euros, almost $17. () 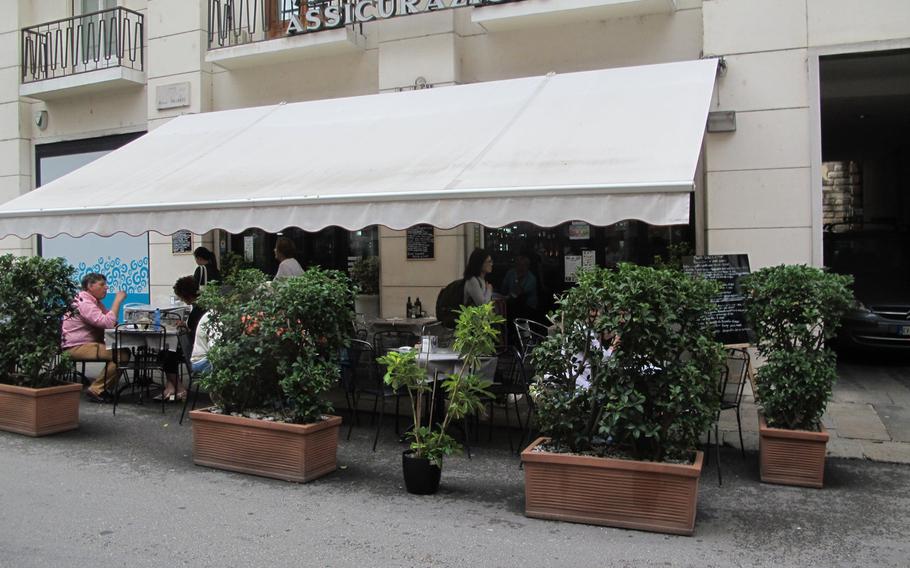 Caffe Tazzo D'oro, one of Vicenza's many coffee bars, is situated on the city's high street and is open all day. (Nancy Montgomery/Stars and Stripes) 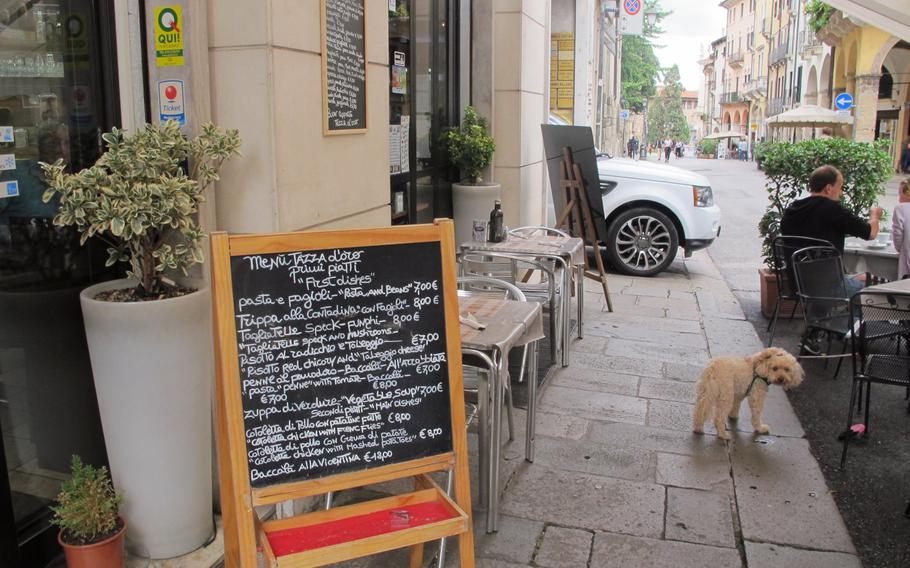 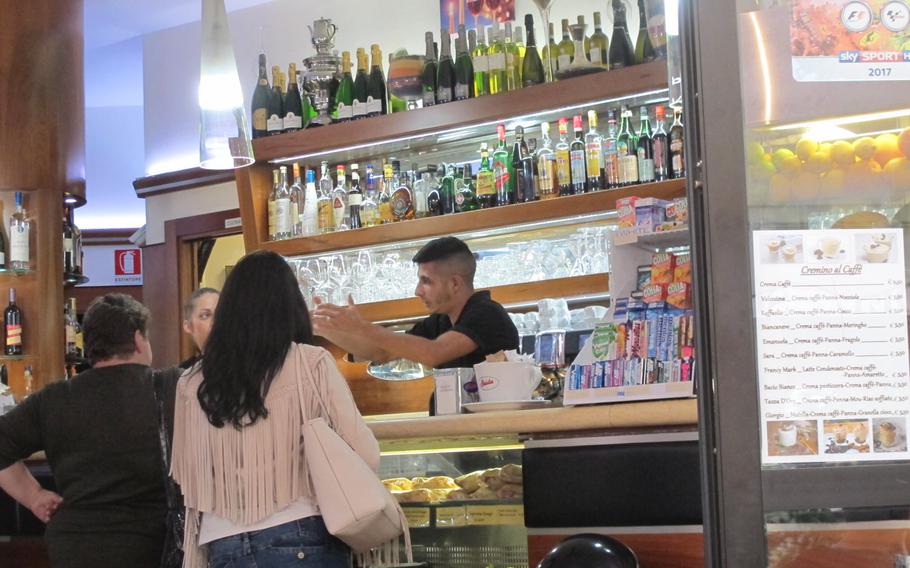 Caffe Tazzo D'oro has a full bar, blends fruit smoothies and offers a variety of coffees. (Nancy Montgomery/Stars and Stripes)

Turns out there is such a thing as bad pizza.

I got one recently at one of Vicenza’s innumerable coffee bars. I’d passed many times by Caffe Tazza D’oro — which means cup of gold — nicely situated on city’s high street. I’d wondered whether the menu items posted on a chalkboard — lasagna, pasta with beans, chicken cutlets, salads and nearly a dozen different pizzas — were good. Was it down-home comfort food, or Italian fast food?

Definitely the latter, at least as far as pizza was concerned. Yet it was not priced like fast food.

I ordered pizza with arugula, bresaola (air-dried, salted beef aged for two months) and shavings of Grana Padano cheese. It cost 9 euros ($10.75), the price of some delicious pizzas I’ve previously enjoyed in Vicenza.

I also got a small bottle of water and a coffee, each 1.50 euros, both acceptable.

But the pizza was not. I couldn’t taste the tomato sauce at all. But the real problem was the crust. It was just slightly warm to the touch, not in the least toasted or crispy, resistant to attempts to cut it with a fork and knife, with the consistency of white bread and equally as flavorless.

After swallowing a few dry mouthfuls, I resorted to eating only the arugula and cheese chunks. Those bits were good. But with a 1-euro cover charge, my bill came to 14 euros — almost $17.

Sitting outside, I took in the passing scene. I considered that the cafe’s food was likely designed for tourists. It might be a better spot for a simple beverage: an Aperol Spritz, a fresh juice or coffee and brioche.