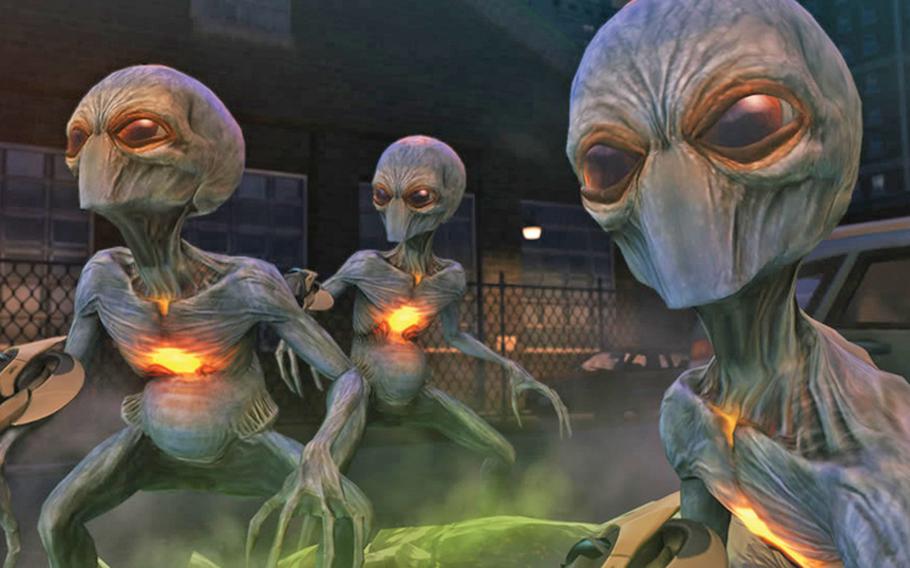 Are those the aliens from "Independence Day?" No, sadly, "XCOM: Enemy Unknown" just needs a little help in the originality department. (AP Photo/2K Games) (AP)

Are those the aliens from "Independence Day?" No, sadly, "XCOM: Enemy Unknown" just needs a little help in the originality department. (AP Photo/2K Games) (AP) Let’s be honest — waiting is not hip. Waiting in line sucks, waiting in traffic is horrible and waiting for your turn — as you might learn at an early age in any Monopoly board game — is generally the opposite of fun. Most gamers want action, and we want it now, especially in the flashy, instant-gratification stereotype of modern video games.

With that in mind, developer Firaxis, renowned for the slow-burn, turn-based “Civilization” series, has released “XCOM: Enemy Unknown” — a tactical strategy game with just enough guns-blazing strategy and conspiracy-addled “X-Files” mystery, at least initially, to get you to give turn-based gaming another go. Once you’re hooked, there’s a solid set of gameplay mechanics to keep you playing — even if you do have to take turns.

“XCOM” boils down to two different games: the tactical strategy side, which involves moving your squad of elite marines around a battlefield grid, and a research side. In combat, each character on your team can move a different number of spaces on the grid per turn, and is allowed one of two actions, either shooting or running, per turn. Once all your characters have taken their actions — found cover, fired or moved — it’s the opposition’s go.

XCOM’s (short for Extraterrestrial Combat Unit) enemy is a randy group of mysterious aliens, initially with much greater numbers and weapons than yourself, and they’re hell-bent on killing all of humankind and dominating Earth. Combat is rinse and repeat until only one side is left with units on the field. After a mission is done, it’s on to the resource management game, which has you working through a tech tree, balancing monthly income and expanding your access to new missions. Both of these elements are great by themselves, especially as you get deeper into the game with tech upgrades and more varied character abilities. The plot — the glue holding the two elements together — doesn’t fare as well, however.

But let’s talk about the good stuff first, starting with the tactical side. Since levels are mostly random, you never know where your soldiers will run into enemies or how many there will be.

Commanders have a wide variety of cover options for unit defense. All sorts of debris — building walls, car doors, fallen trees, piles of rocks — can be used to protect you on one side. Levels are also sometimes highly vertical, allowing players to gain a line-of-sight advantage by climbing tall hills, rooftops and the like.

Combat is controlled by percentages. Low-level rifles and close-range weapons have dramatically lower chances of hitting what they’re aimed at as opposed to some high-tech alien laser beam, and a unit’s cover adds or subtracts from that percentage on top of that. As you blast away at someone, their cover will slowly degrade, making it so units always have to stay ready to move on to the next type of cover. Extra percentage points for defense and attack are given for whether you’ve caught somebody out of cover, or flanked them in some way.

Just like the squadmates themselves, a wide complement of weapons slowly presents itself as a player upgrades his way through the tech tree. Not only are there higher-powered weapons, but things such as grenades, jetpacks and even rocket launchers can make it into your arsenal.

“XCOM” does a really nice job of keeping the upgrade system interesting with an almost game-within-the-game approach. When combat is over, it’s time to go back to a mysterious command bunker to explore the tech tree. From there, it’s your job to deploy a mini army of researchers and engineers. Building new areas for either class will increase the pace at which they get things done, but also will increase your monthly expenses. Helping them help you turns out to be quite a costly endeavour, but also helps prepare your soldiers for harder battles later down the line.

Whereas battles proceed pretty much the same way each time — a slow creep forward as you try to cover each unit’s back — the research component of the game is almost an open playground. There are few right answers, making each replay of the game different from another.

Do you go for alien weapons first, or better body armor? Maybe expanding your mission area and pumping up monthly income is the way to go, but that might mean slogging your way through half the game with the same standard-issue pistol.

In both tactics and research, the best parts of “XCOM” are its gray areas. It has a lot of paths that players can take in whichever way they choose. You can take it slow through each level, hitting cover point by cover point, or make a beeline for your mission objective.

Strangely, the one place Firaxis should be having the most fun — the storyline — is where everything is the most awkward.

To be blunt, the storyline to “XCOM” is like a rejected “X-Files” plot. Aliens have come to take over! We’ve got to reverse-engineer all their technology in two days!

Yes, aliens are attacking the planet. Yes, the XCOM team is our only hope. A strange consortium of world powers has hired you. Their mysterious foreman, whose face you never quite see, is their apparent distruster in chief. He hauntingly reminds you after each mission: “Remember, we will be watching,” as though you’re going to run off with all the research and weapons and use them in a different game.

When it’s all said and done, I almost felt I knew more about the aliens than I did about who I was working for — never mind giving me a reason for doing it.

Regardless of that missed opportunity, “XCOM” is a fantastic example of how fun it can be to go back to taking turns.

Bottom line: An excellent turn-based strategy with an intelligent approach to research. Ignore the plot if at all possible.