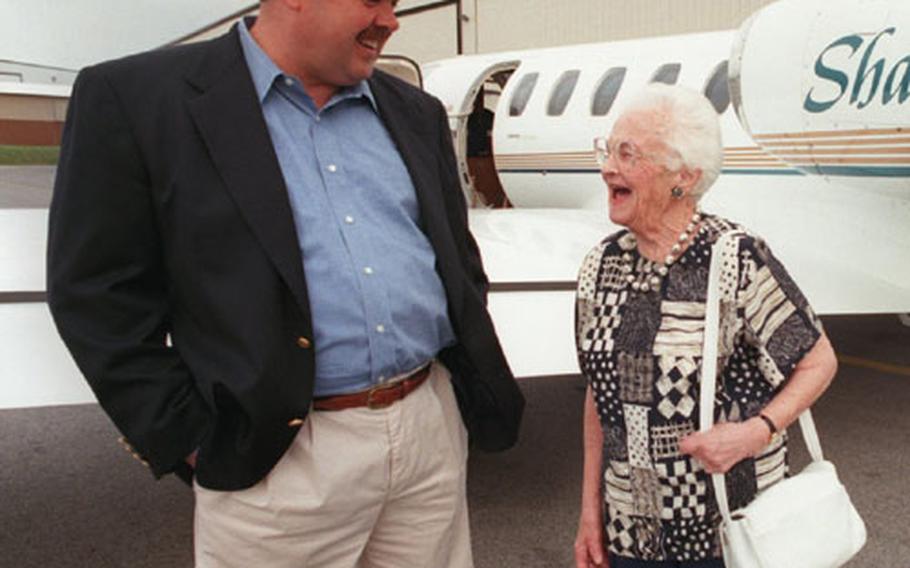 Doris Mamolen, 89, of State College shares a laugh with Fred Shaner, president and CEO of the Shaner Hotel Group, before boarding the company&#39;s private jet at University Park Airport on Thursday, July 20, 2000. They were flying to Des Moines, Iowa, to help dedicate the newly restored Hotel Savery, where Mamolen was a WWII Women&#39;s Army Corps commanding officer at the WAC training barracks located at the Savery Hotel. (Craig Houtz / S&S) 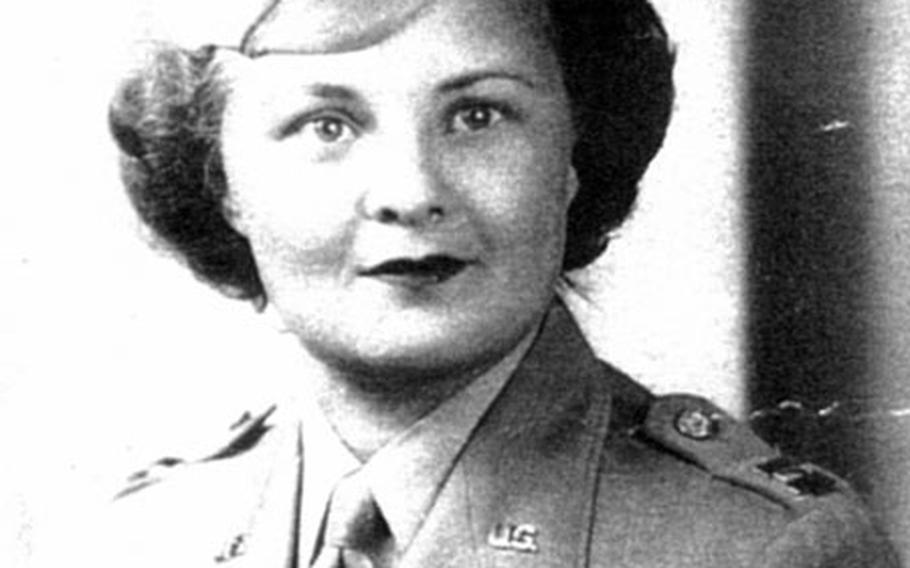 ARLINGTON, Va. &#8212; Few military women would deny that they face challenges their male counterparts don&#8217;t &#8212; from the mundane, such as coping with personal hygiene in the field, to the profound, such as juggling motherhood against prime promotion opportunities.

But thanks to Doris Brill Mamolen, 92, and women like her, many challenges are just a distant memory.

From 1942, when the first WAC officers were trained, to 1946, when the group was largely demobilized, more than 150,000 women served in the corps. The WACs helped win the war, and in doing so, paved the way for every woman who has since laced up a pair of combat boots and raised her right hand to swear on oath for her country.

And Doris Brill Mamolen was on the front lines.

Mamolen was born Doris Brill on Aug. 23, 1910, in Philadelphia. She graduated from the Philadelphia Normal School, a teachers college, in 1929 and spent the next eight years teaching grade school in the Philadelphia public school system.

The Women&#8217;s Army Auxiliary Corps was organized in the United States in May 1942, and the first Officers Candidate School class was formed on July 20 that year.

Mamolen followed the press reports about the new corps with great interest.

&#8220;I was single, unattached, patriotic and considered myself a capable person,&#8221; she writes in her unpublished 1980 memoirs.

Odd as it might seem today, feminine clothing was a major preoccupation &#8212; not only for the WAACs, but for the general public, who were watching for any signs that the women were &#8220;masculizing&#8221; themselves, Mamolen said.

The WACs hated their Army issue khaki underwear and cotton, rather than nylon, stockings.

To make the situation worse, civilian women were being hired by the droves to act as secretaries on domestic military bases, and those women &#8220;spent a lot of money to dress to the nines and loved to taunt the WACs&#8221; about their drab blouses and skirts, Mamolen said.

&#8220;I had my first real chance to get to know the women who had enlisted with me,&#8221; Mamolen said. &#8220;They were indeed the cream of the crop. Almost everyone had given up an important, well-paying position to join the WAACs, and was anxious to get assigned to her job in the Army.&#8221;

Mamolen was sent back to Fort Des Moines to attend the 17th Officer Candidate Training class.

After graduating as a second lieutenant on March 2, 1943, Mamolen was sent back to the Hotel Savery &#8220;to command the very company I had left in January.&#8221;

The company was one of the first integrated WAAC units. Mamolen&#8217;s black charges &#8220;were just delightful, wonderful, wonderful girls, so nice,&#8221; she said.

From the Savery, Mamolen was sent to three different bases in quick succession.

The first base was Will Rogers Field, Okla., where she was sent in July 1943 to activate the 1st WAAC Squadron/Squadron W, at the 348th Army Air Force Base.

There was a drop in recruitment in late 1943 caused by a smear campaign against the WAACs undertaken by many prominent columnists of the day.

John O&#8217;Donnell, whose column, &#8220;Capitol Stuff,&#8221; was carried nationwide, wrote the most damaging article, which claimed that a &#8220;super-secret War Department policy authorized the issuance of prophylactics to all WAACs before they were sent overseas.&#8221;

On Sept. 1, 1943, WAAC became the Women&#8217;s Army Corps, officially part of the U.S. Army. Brill had the option of leaving the service, but like 75 percent of the WAACs, chose to make the transition.

On March 1944, Mamolen was promoted to the rank of captain, and in September, she was sent to Gulfport Air Base, Miss., again as commanding officer of the WACs.

From Gulfport, in May 1945, Mamolen went to her final station, at Chatham Air Base, near Savannah, Ga.

Life after the Army

Capt. Doris Brill met her husband-to-be, Morris Mamolen, at a train station in a Philadelphia suburb in May 1945. The couple had been set up on a blind date.

Her future mate was the owner of a very large department store in Millheim, Pa., called Nieman&#8217;s. He was 44 and a widower, with a 14-year-old daughter, Joan.

After that, &#8220;we should have bought stock in a telephone company, because he called me every single night from the day he met me,&#8221; Mamolen said.

In her own words

The following are some excerpts from the unpublished 1980 memoirs of Doris Brill Mamolen, &#8220;Private Benjamin, This is How it Was!&#8221;

The memoirs tell the story of Mamolen&#8217;s experiences during World War II as an officer in the Women&#8217;s Auxiliary Army Corps, or WAAC, which later in the war became the Women&#8217;s Army Corps, or WAC. Mamolen was prompted to write her story after watching the Hollywood movie &#8220;Private Benjamin,&#8221; a comedy starring actress Goldie Hawn that portrays a spoiled young socialite&#8217;s experiences in boot camp. &#8212; Lisa Burgess

At Des Moines I, along with the other already homesick girls, was whisked to my basic training compound outside of town. This was an old cavalry post that had hastily been converted into headquarters and barracks for women. Despite the intensive use of disinfectants everything still reeked of the horses that had recently been stabled there.

Everything was so hectic then that most of my memories are of the constant lining up for clothes &#8212; everything in that stylish khaki color, including our nightgowns and underwear. After a few months we were permitted to wear &#8220;civilian&#8221; panties, to our great joy.

During our frequent assignments to K.P., we would leave our double-decked beds by 5 a.m. to trudge the snow-covered ground to the mess hall. We arrived there well before the rest to help prepare and serve the food and to clean up afterwards &#8212; washing dishes, huge pots and pans and worst of all, cleaning out the grease traps in the kitchen.

During my first K.P., I was assigned to perform a fairly easy task. When I finished earlier than the others, I reported to the female sergeant in charge, expecting to return to the barracks.

She pointed to what seemed like miles of 1-inch copper runners that held down the walkways between the three sections of tables. Which I did &#8212; which sent me back to the barracks last &#8212; and which taught me a valuable lesson.

My company was the first to have both white and black WAACs living together within the city of Des Moines. The black girls were of equal abilities and a very attractive group.

Although I had to assign all the black girls to living quarters one floor and the white girls to a second floor, I tried to integrate both groups by having one day&#8211;room. It didn&#8217;t work. No one &#8212; black or white &#8212; used this room during the time I was there.

However, in one instance, I was successful in encouraging some integration. It came to my attention that at some restaurants in town, while they did not refuse the black WAACs service outright, seated them at the rear of the room and then ignored them until they walked out.

Only when I visited these places and threatened to have them declared off-limits to all the WAACs did the word get around, and this practice was stopped.

We were often accused of gaining special favors because we were women. Sometimes we did.

In one instance, orders came through stating that no longer would sheets and pillowcases be issued, because there was a shortage out there in the civilian world. This applied to all the airmen, the WACs and the transient bachelor officers. I had a serious talk with the quartermaster, warning him that if the women had to sleep on the drab, dusty ticking of the pillows and mattresses, they would have linens sent from home &#8212; and would that be good for public relations? So we were exempted.

Another time another shortage occurred, and the order was given that the daily allowance of toilet tissue was to be six sheets per person. But this time, the quartermaster reminded me that the WACs had voluntarily joined the Army, and should expect to be treated just like the men.

We got all the toilet tissue we needed.

Many celebrities visited our base. Most of them, men and women, visited the hospital, the N.C.O. clubs and wound up at the Officer&#8217;s Club. One exception was the visit of Olivia DeHavilland [best remembered as Melanie in &#8220;Gone With the Wind&#8221;]. She came on Christmas Day, visited the hospital and spent the rest of the day with the WACs, joining them for their Christmas dinner. It was a memorable day &#8212; and we all have pictures to prove it.

There was also another memorable visit. Suddenly, one late afternoon, a parade muster was ordered. There was a visiting dignitary and all available persons were to report to the north field (and I mean field). Each company, with their ridiculous lack of numbers, stood at attention, awaiting the appearance of the celebrity. And there, hobbling along the uneven ground, in spike heels, a full-length mink coat, accompanied by a high-ranking officer, was Arline Judge, the [mostly low-budget, B-] movie actress [famous for having married and divorced eight times], inspecting the troops. It was a sight I shall never forget.