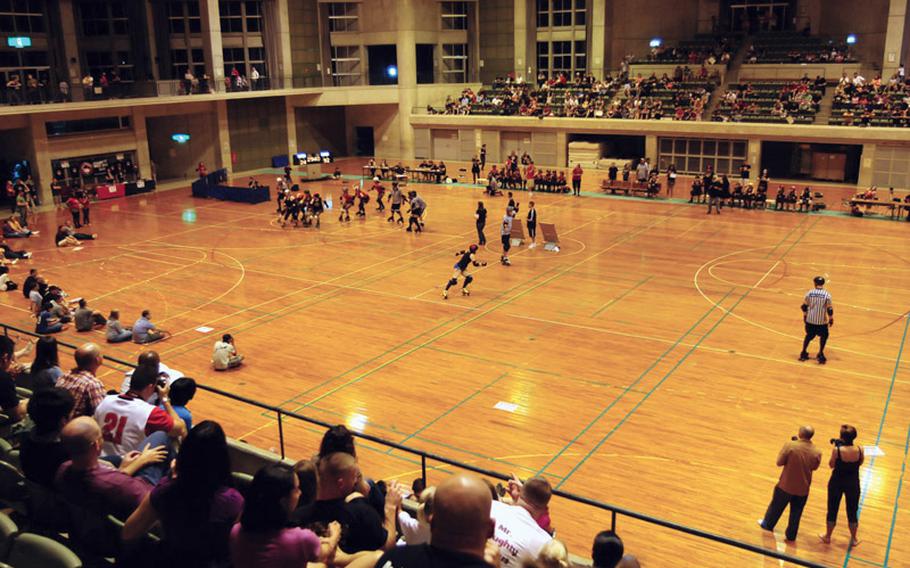 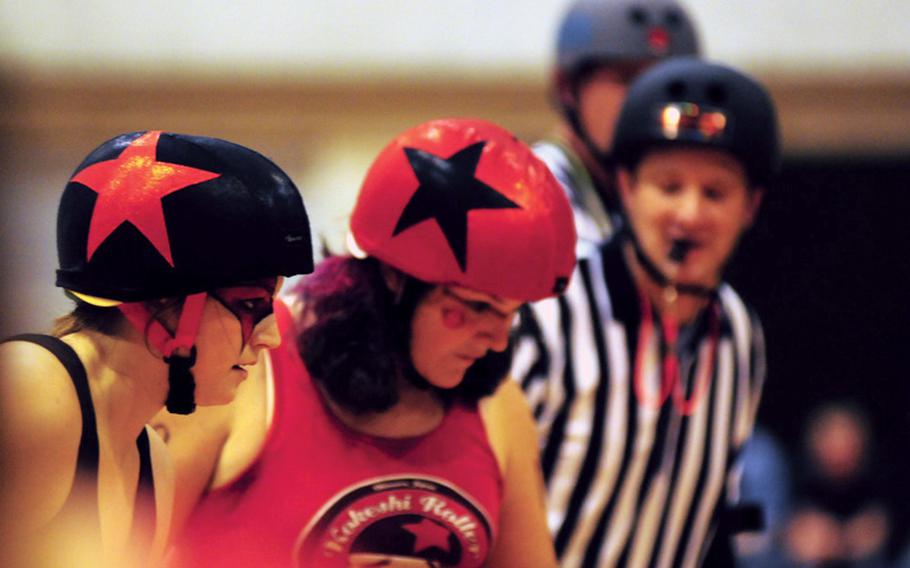 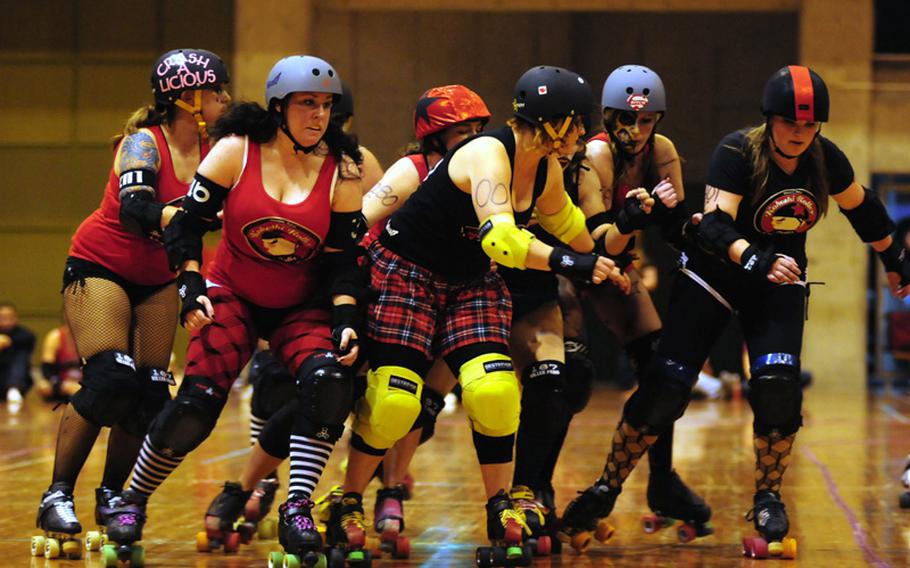 Buy Photo
Kokeshi Roller Derby team members battle for position during a May 14 derby on Okinawa. (Matt Orr/Stars and Stripes) 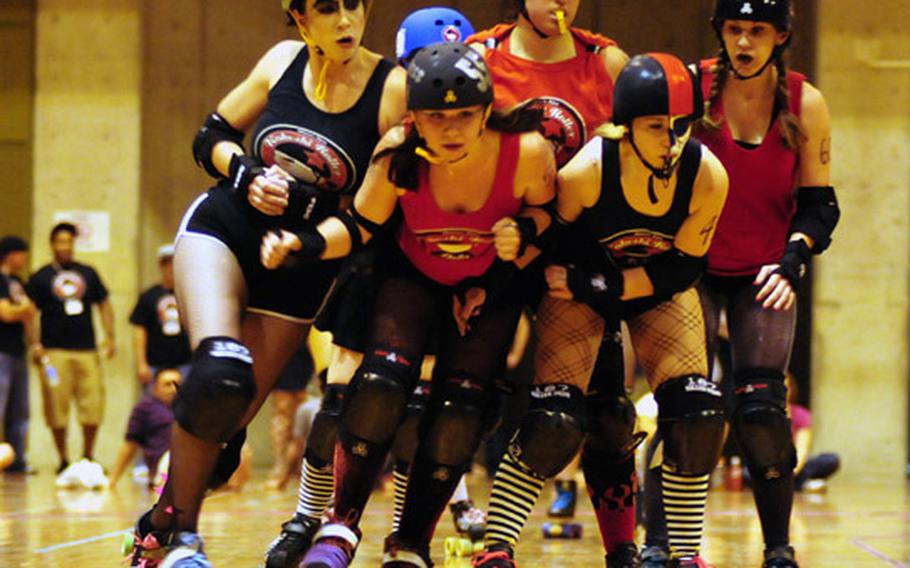 Buy Photo
Kokeshi Roller Derby team members push and shove their way through an event May 14 on Okinawa, Japan. (Matt Orr/Stars and Stripes) 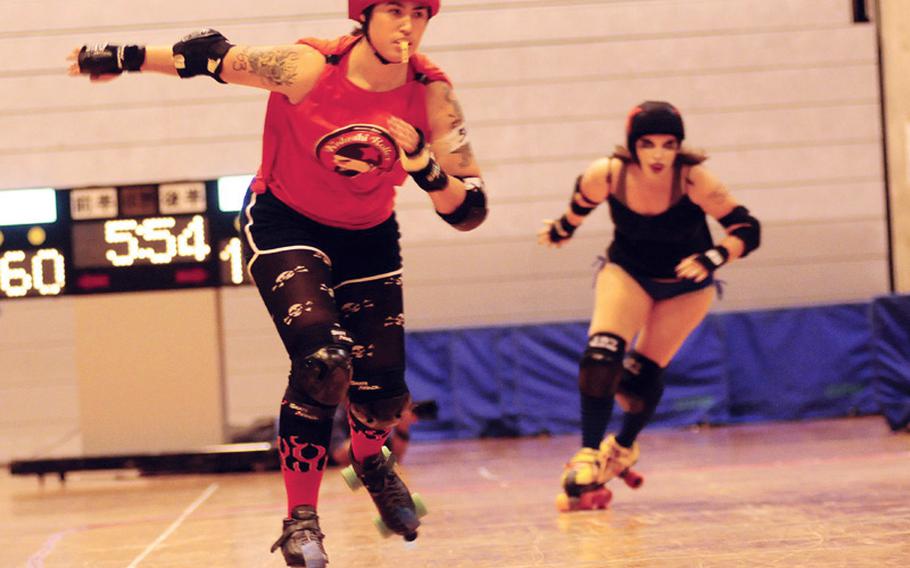 Buy Photo
Jen "Jailhouse Jen" Sonnamaker takes the lead as Staci "Pretty in Punk" Stubbs tries to catch her during a May 14 roller derby on Okinawa. (Matt Orr/Stars and Stripes) 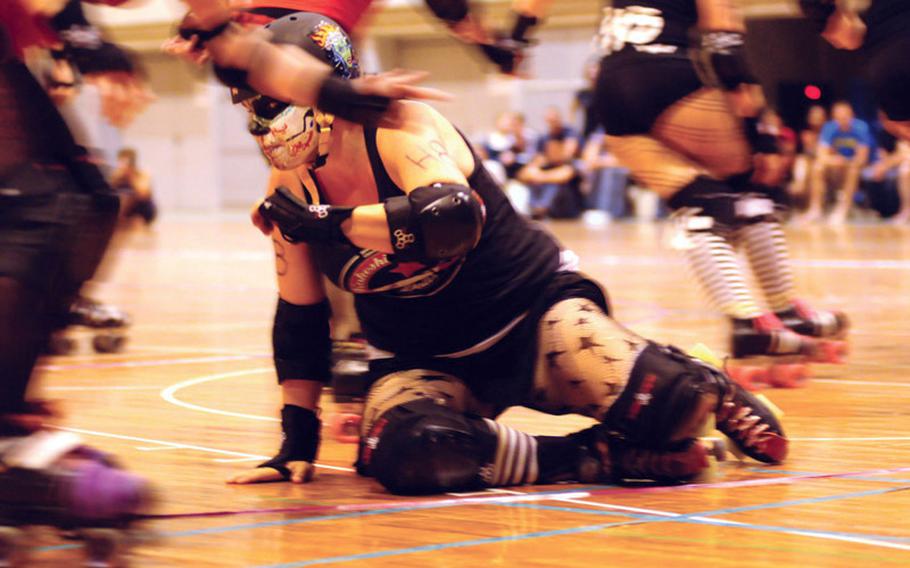 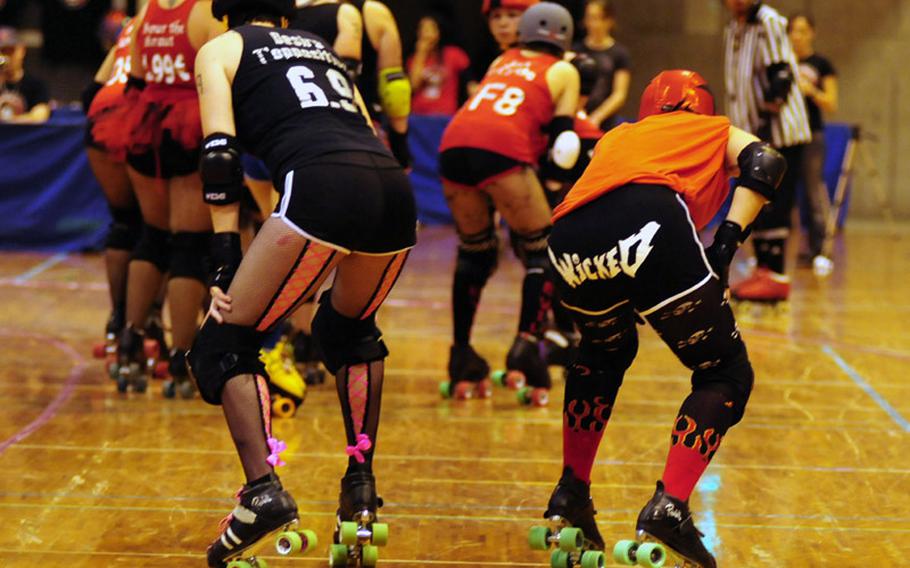 Buy Photo
Kokeshi Roller Dolls skaters wait to kick off a derby May 14 on Okinawa, Japan. (Matt Orr/Stars and Stripes) Buy Photo
Kokeshi Roller Derby team members watch the action on the track while waiting their turn May 14 on Okinawa, Japan. (Matt Orr/Stars and Stripes) 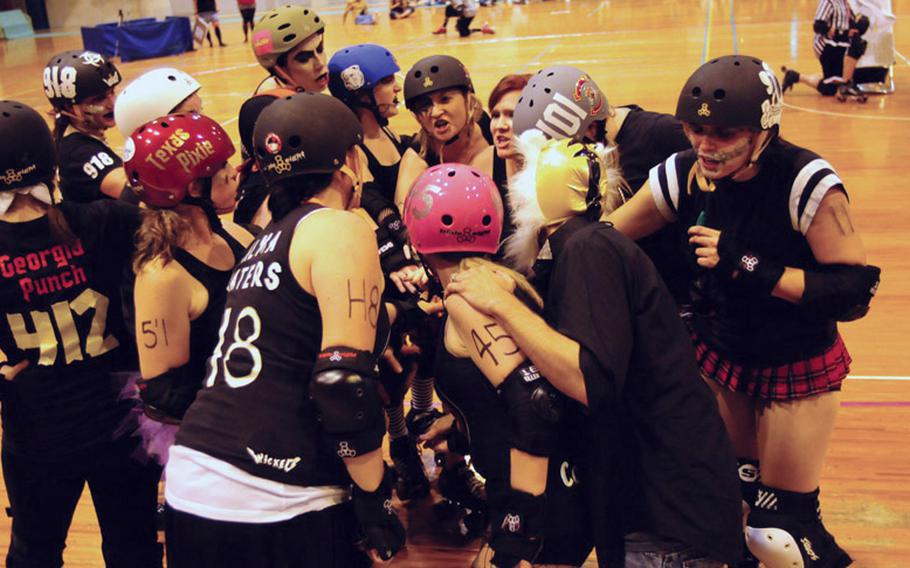 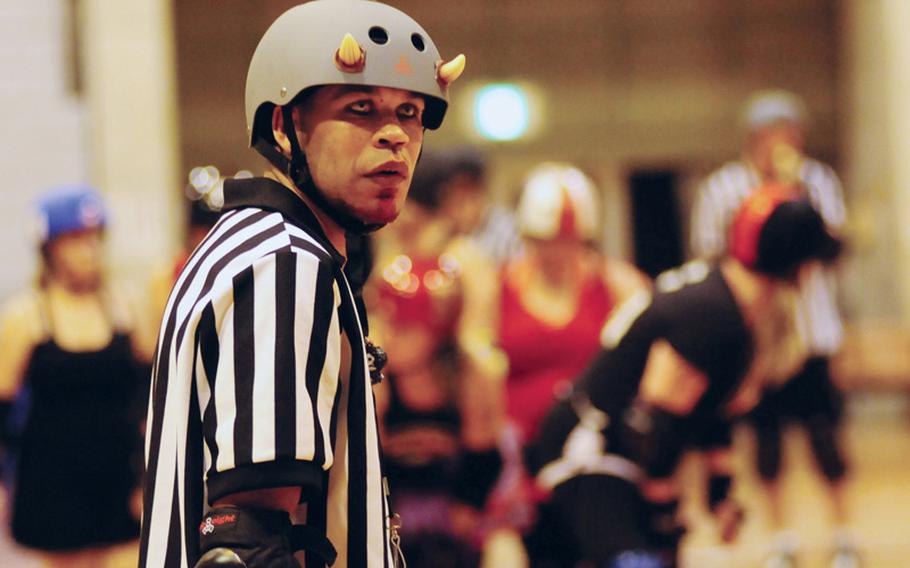 Buy Photo
Rahsaan “Kra-z I’s Redbone” Towler was one of the many referees who volunteered for the Kokeshi Roller Dolls first bout at Comprehensive Park on May 14. (Matt Orr/Stars and Stripes)

The Kokeshi Roller Dolls wowed an audience of more than 800 when they went to battle on a recent Saturday night, weaving, blocking, shoving and slamming their way through a roller derby competition.

With painted faces, fishnet stockings and other punk-type fashion, the Roller Dolls red and black teams kept the audience roaring.

She said she was initially attracted to thesport &mdash; with its edgy, punk-rock styles and physicality &mdash; because of the crazy challenge it offered. But, more importantly, she said she knew it would allow women on Okinawa to build a sense of community.

"I really felt a need for it from the women in the military community and I really felt it could fill that void," she said. "We are so far away from a normal support network, and developing new friendships can be hard when you are moving from place to place. This has allowed me and others to have a huge support network. I have more friends now than I ever have before."

She called it a place where women can compete, hang out and make great friends.

"The reason it is so successful is because of the camaraderie and the sisterhood," Harms said. "It is just such a unique and empowering female sport, and it&rsquo;s a thrill to watch and totally different to other sports like basketball. Plus, it&rsquo;s fun and very strategic."

It is, of course, a contact sport in which the women race around a track attempting to pass each other to score points. The opposing team hopes to stop that pass with well-timed bumps and blocks that can send women tumbling to the ground or flying into the outer barrier. It is a culture where bruises, scratches and bumps are par for the course.

"It&rsquo;s a full-contact sport dominated by women," Harms said. "The most common injuries are bruises and rink rash."

Kathryn "Lucious Loosie" is a former figure skater who joined a Nashville roller derby team because she thought it would be fun. Last year, she competed at the Roller Derby National Championships in Chicago. "I was the happiest person in the world when I [competed] at the nationals last year, but I was also sad as I didn&rsquo;t think there was a team on Okinawa," she said of moving to the island with her Air Force husband.

But she learned about the Roller Dolls and started training with the team within days of landing on Okinawa.

The women plan to keep competing on Okinawa. "The plan is to invite other leagues in the Pacific area and have a bout here on Okinawa," Harms said.

There are currently two leagues on Okinawa, the Kokeshi Roller Dolls and the Devil Dog Derby Dames, formed in November 2010. There&rsquo;s a league in Seoul, South Korea, called the ROKD Republic of Korea Derby. Yokosuka Naval Base, outside Tokyo, has a team called the Yokosuka Sushi Rollers.

The leagues have Facebook pages &mdash; just search for the team names if you&rsquo;re interested in joining. Team members say you&rsquo;ll need to be 18 or older, have the skates and not be worried about a few bruises.